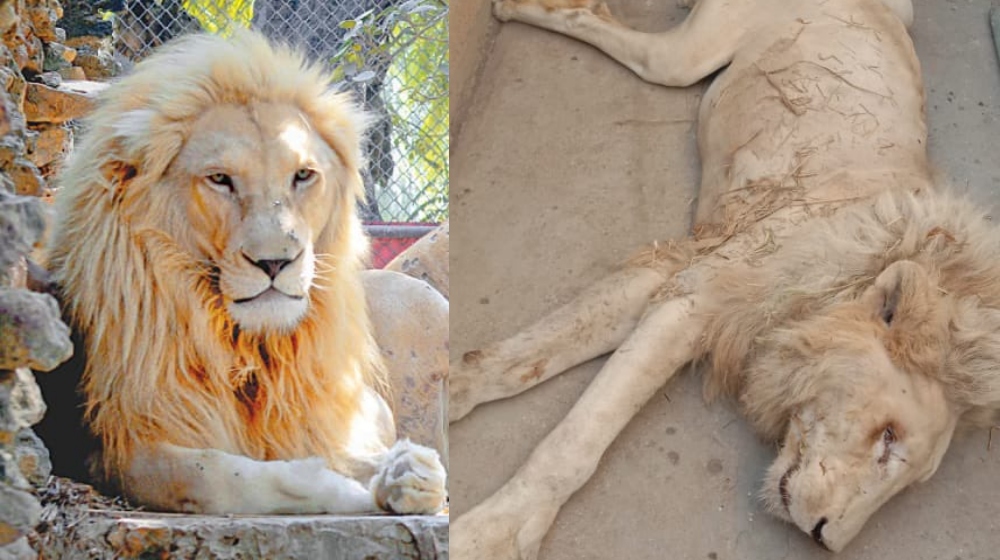 After a rare white lion died in Karachi Zoo, Netizens and celebs alike are slamming those responsible.

According to the Karachi Metropolitan Corporation (KMC), the rare species of lion died on Wednesday after its lungs stopped working due to pneumonia. The big cat had been ill for the last 13 days and suffering from Pulmonary TB as per the autopsy. The official claimed that the lion was being treated by veterinarians but ‘he could not recover and died due to his illness‘.

Though Netizens and celebs are calling out authorities given the despicable state of the lion’s body. From the animal’s gaunt and starved body to signs of abuse given the scars.

This rare white lion was brought to the Karachi Zoo from Africa in 2012. He was currently around 14 to 15 years old. While the autopsy lists the cause of death as pneumonia, some reports also claimed the lion died of a cardiac arrest due to excess fat deposit on its heart.

Several celebrities are pleading with the government and law enforcement agencies to put an end to the ‘zoo culture’.

Ushna Shah stated that Pakistan just doesn’t have the funds to take care of animals.

“Overall, Pakistan has shown its inability to take care of animals – be it street dogs or wildlife. The zoos should be abolished immediately! Pakistan doesnt even have money to feed the animals the quantity of food they need to maintain heathy weight.”

A lack of money to properly sustain wildlife in captivity is a glaringly obvious problem.

Mortified to find out how animals are being kept in the #KarachiZoo, apparently because of lack of funds. And this African lion died today. They say it’s tuberculosis. He was being kept in the same enclosure as the Lioness with such a contagious disease. pic.twitter.com/GSwthV8Zly

Meanwhile, Shaniera Akram pointed out how zoos are supposed to be safe spaces for endangered species to live in protection, with hospitalization, rehabilitation, and facilities for their recreation and breeding. That is obviously not true for Pakistan.

B#%S!
He died because we couldn't look after him!
Zoos should be a place where animals go for protection, hospitalisation,rehabilitation, recreation & breeding! At the very least, people can then go to observe them.
Anything less than that,Are NOT Zoos they are animal prisons! https://t.co/uHMmagL3rF

Yashma Gill shared how she even went to the Karachi Zoo to feed the lion, but the officials wouldn’t allow her to. Hence not even allowing someone else to fund a better diet for the poor animal. 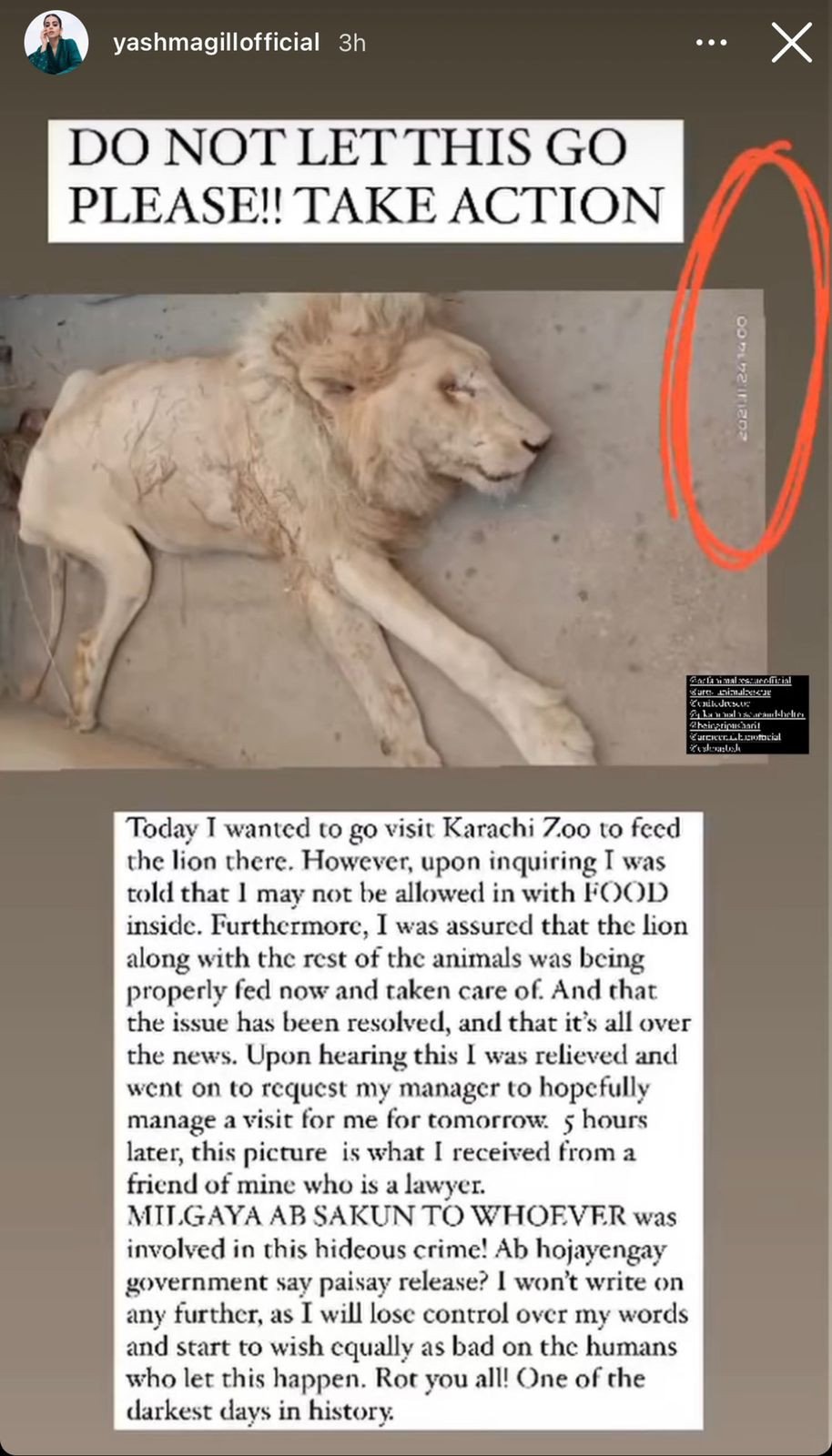 Other celebs to lament on the situation include Yasir Hussain, Anoushey Ashraf, Ahsan Khan, and Ahmed Ali Butt. 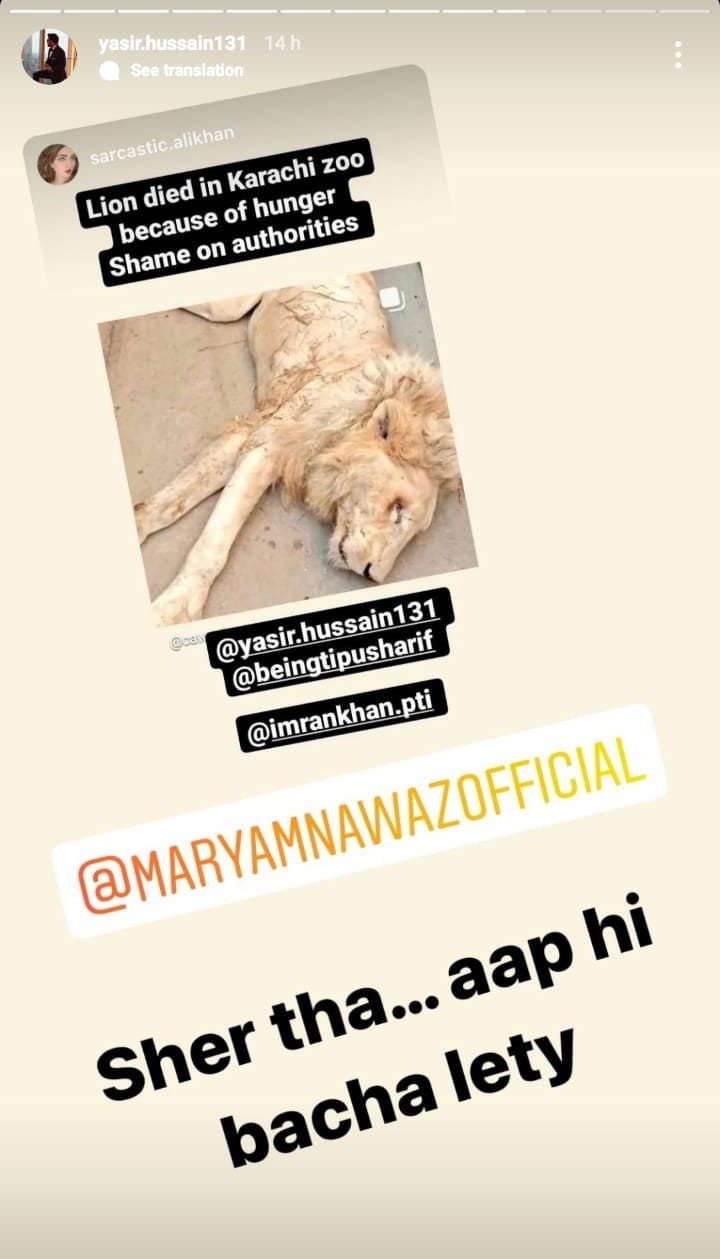 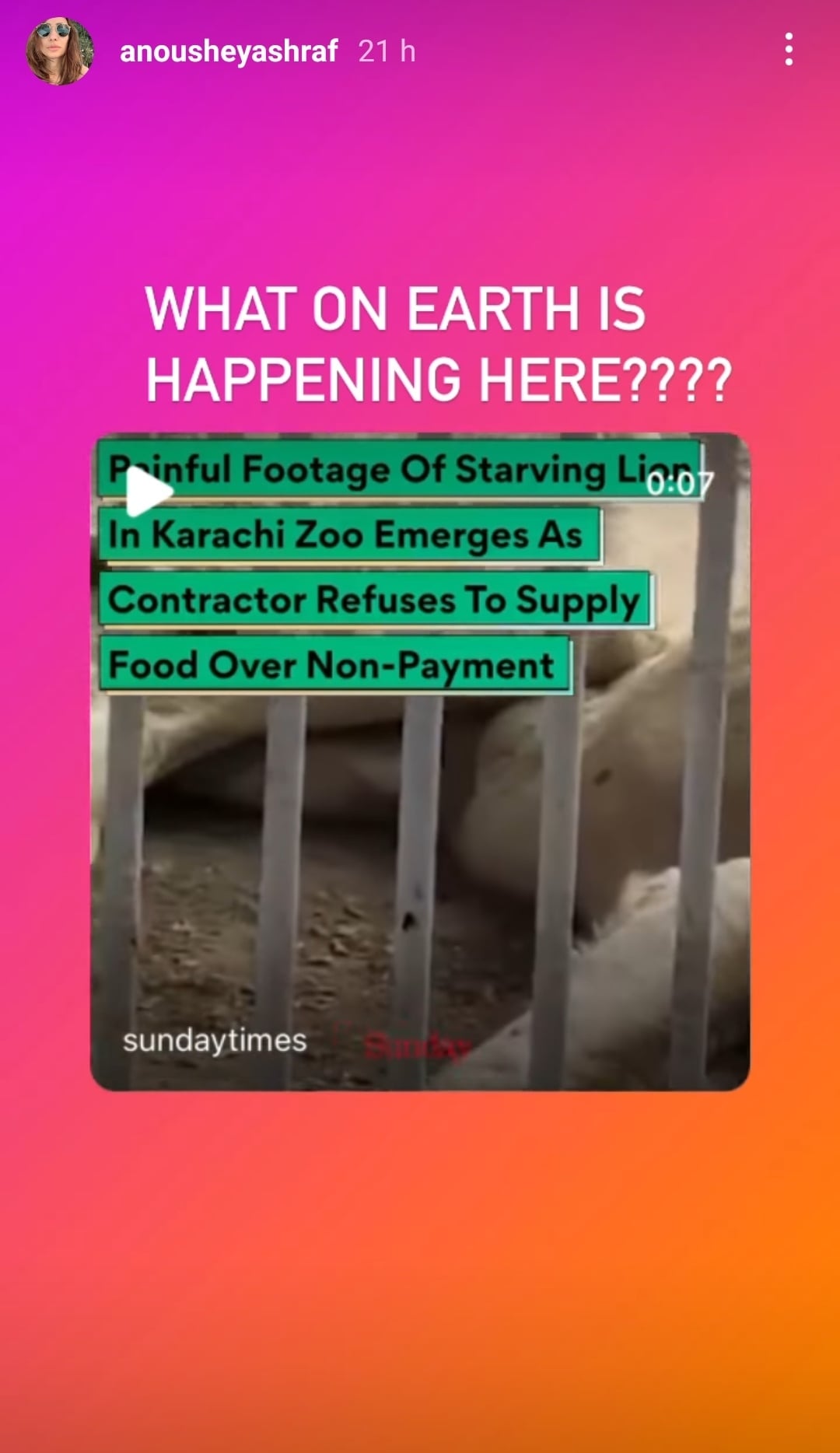 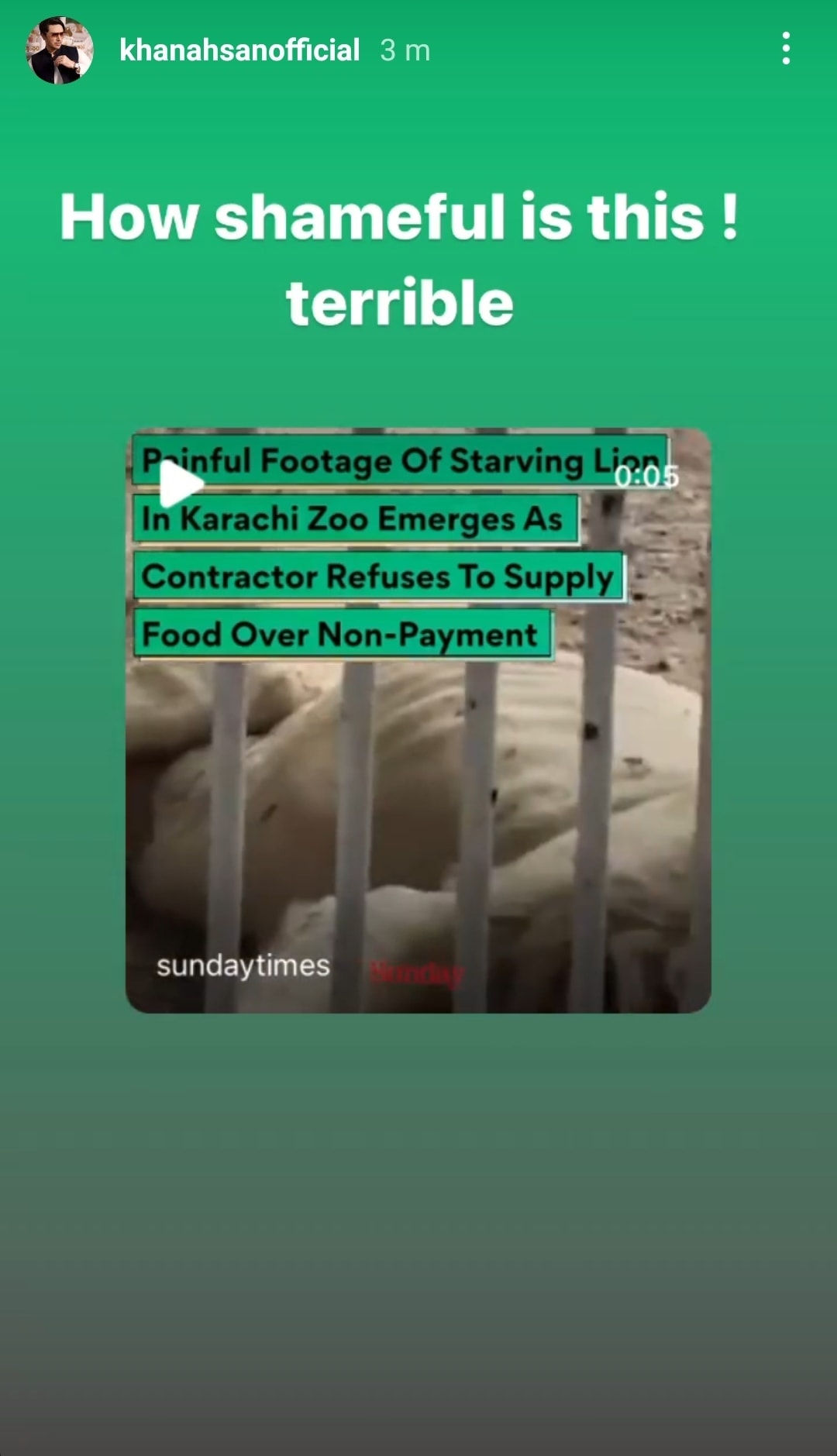 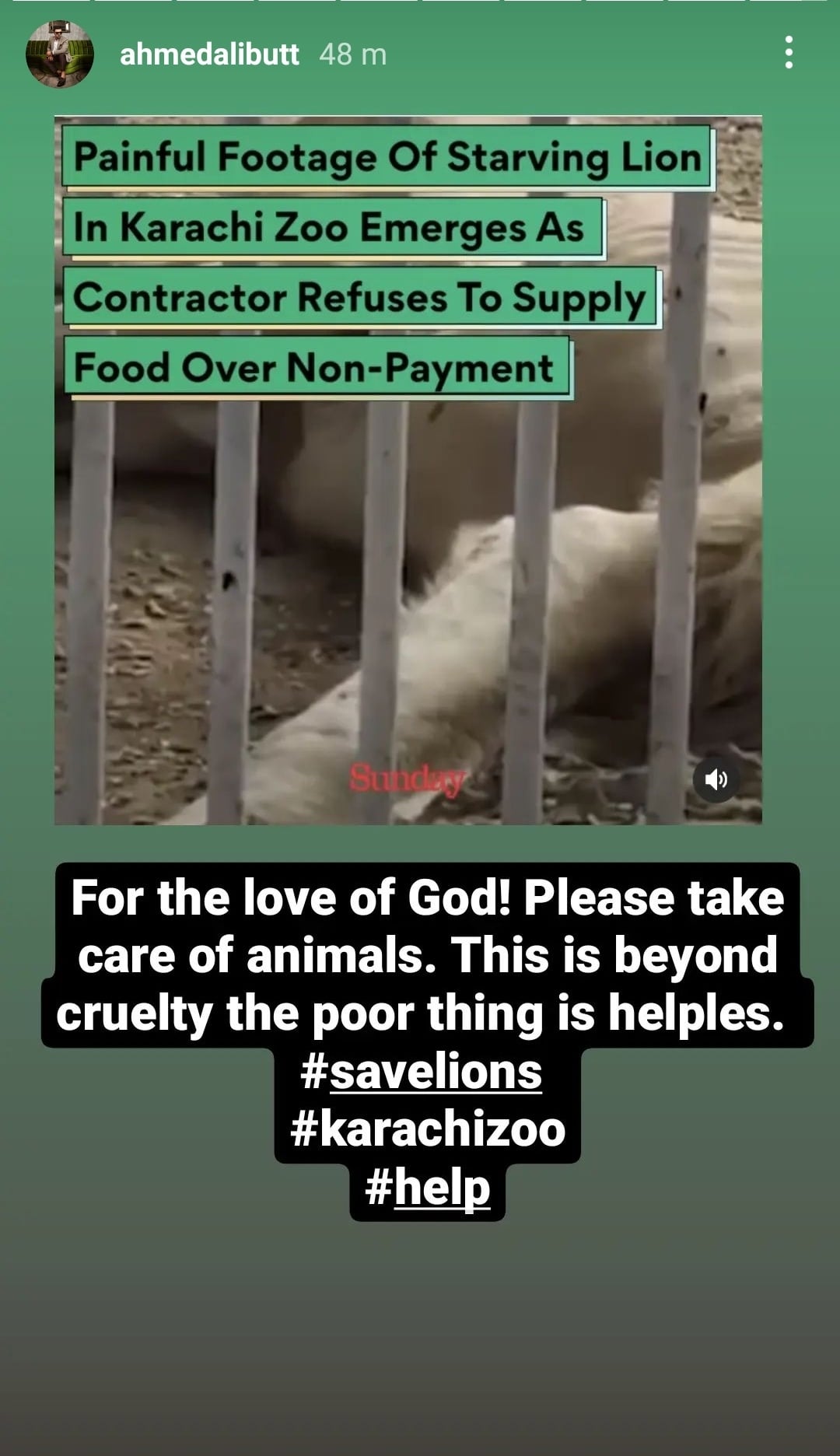 How do you feel about zoo culture? Let us know in the comments below.