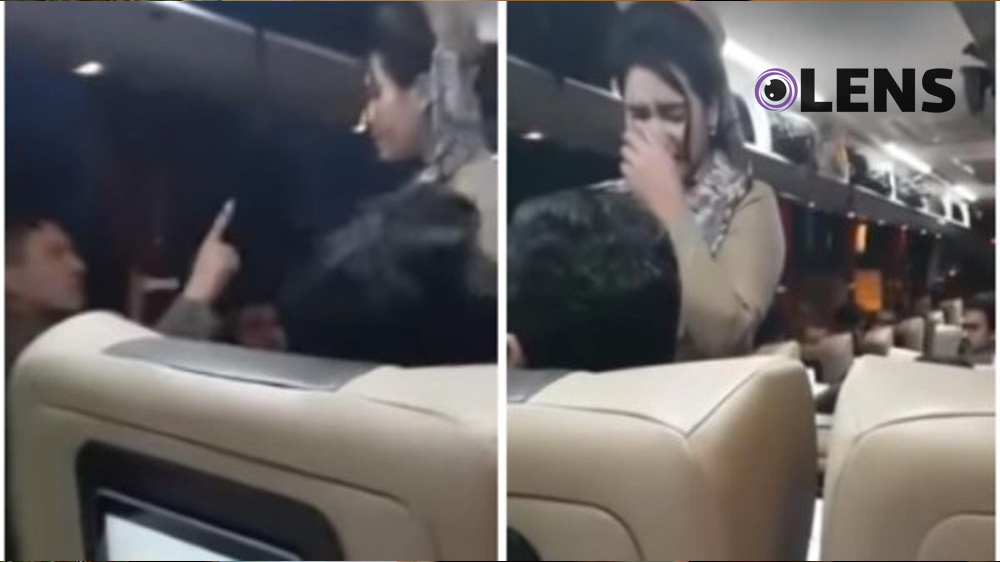 A shocking incident of female harassment has surfaced on social media in which a self-proclaimed FIA official shamelessly threatens a bus hostess. The man warns the hostess on a bus  of ‘dire consequences’ just because he demanded an extra water bottle.

The incident reportedly happened on Sunday in a Faisal Movers bus, traveling from Lahore to Islamabad.

The hostess was distributing chilled water bottles among the passengers, when an identified man, who claimed himself to be an FIA officer, asked for a second bottle.

The hostess softly denied informing that she wasn’t allowed to give more than one bottle to a customer.

In response, the man flew in a rage, snatched two bottles off her tray and started abusing her. When she resisted, the man began to threaten her of dire consequences.

Here’s the video of the incident:

“Who are you to stop me from getting water bottles? I am your customer; I can do whatever I want,” the man shouted.

Naturally agitated by his response, the girl asked him not to misbehave and stop shouting, but he seemed to be going too far.

“I will throw you out of this bus and will take you somewhere. People will see what I will do with you there,” the abusive passenger continued.

The hostess burst into tears, and other passengers had to calm her down. During this time, the Motorway police was also called.

“The elderly female police officer was about to kick him off until the man said that he’s from the FIA and he will not spare anyone who tries to complain against him. Hearing this, the police was hesitated to offload him,” said the man who uploaded the following video on his Facebook post.

Passengers to the Rescue

One of the passengers who was in the bus remarked:

“Watching the situation slipping out of the hands, me and all passengers stepped outside the bus with her and talked to the motorway police to get him off no matter what he might be from or what his rank might be,” he added.

The ‘FIA official’ was finally offloaded from the bus, and a harassment suit was filed against him.

Guess chivalry isn’t dead at all, and we’re glad that one toxic man got exactly what he deserved. There’s no reason to harass a lady, especially when she’s done nothing wrong.