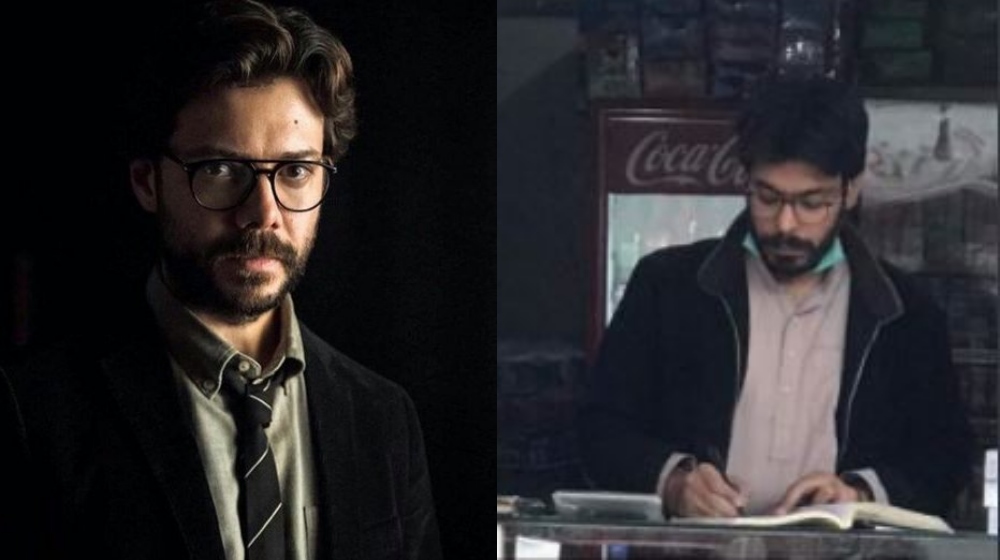 As the hype around Money Heist is raging once again with season five, people have spotted a Professor lookalike in Pakistan!

HE LOOKS LIKE PROFESSOR MORE THAN THE PROFESSOR 😭 https://t.co/bSxvLzalfm

Are we just seeing things or is this the real deal? Twitter is flooded with pictures of this doppelganger. The Professor’s doppelganger is apparently selling groceries in a Pakistani store.

We all know where planning took place pic.twitter.com/wnJhqrPmtO

Confirmed: This Pakistani is the Exact Lookalike of Tyrion Lannister from Game of Thrones

Is this retirement? Did the professor leave the adrenaline rush of heist behind for a quiet life? Was his exit just staged?

Is this what he meant when he always said: contact Pakistan?

The guy who found the Professor is a Dallas-based photographer named Syed Adil Farooq. Maybe Adil Farooq can share more insights on our man’s whereabouts.

If Adil Farooq is a Karachiite, people might already have an idea who’s the doppelganger he’s talking about.

Can you help me connect with him? Which area ?

Netizens had a range of reactions, some of which are hilarious.

hey where is this im asking bc i need toothpaste and i need to buy it there so if you know where that is and maybe who that worker is could you please tell me that would be very helpful 😅😅😅 https://t.co/hki6Lf0OP8

Netflix’s popular Spanish series, Money Heist is finally coming to an end with season five. As soon as Netflix dropped the show people started streaming it. Of course, this led to reactions and spoilers. The memes made it easier to say goodbye to the iconic show.

People are still hoping for another season.

#Professor in Pakistan I think his next series will made in Pakistan 💁 https://t.co/Iwlt2OG5on

Spanish actor Álavaro Morte played the Professor in the series. As a central character throughout the series, he is a fan favorite. Currently, people await five more episodes of Money Heist Season 5.

This picture of Professor’s doppelganger at a convenience store or medical store in Karachi, Pakistan only has our imagination running wild.

Only five episodes of Money Heist Season 5. were released as the season was split into two parts. Part 2 will air on December 3, 2021.