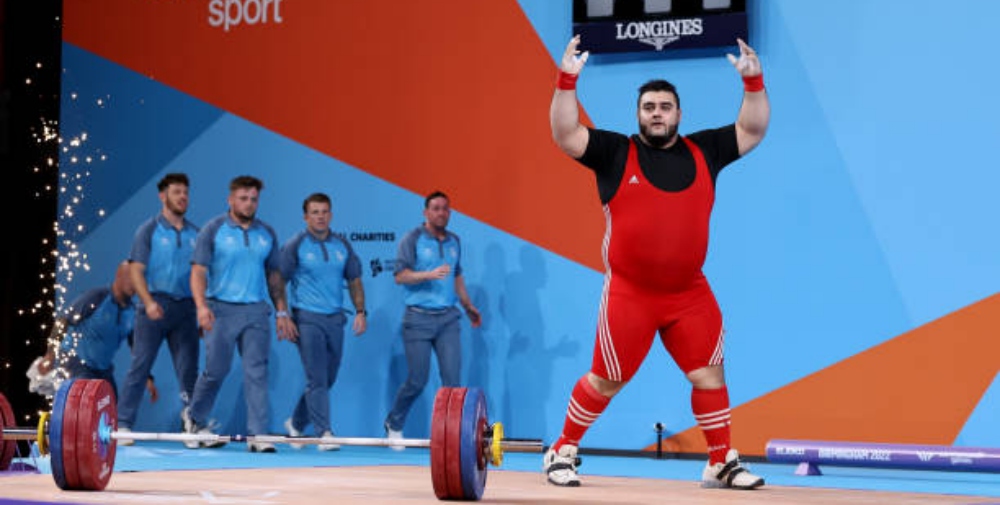 As a Pakistani weightlifter, Nooh Dastagir Butt, bagged a gold medal at the Common Wealth games 2022, Netizens and celebs alike are lauding the sportsman.

The 24-year-old weightlifter from Gujranwala has made the nation proud as an athlete. Not only did he bag a win, but he also won the first gold medal at Common Wealth Games 2022.

Visuals of Nooh’s as he carries the Pakistani flag are making rounds online. In the videos, you can hear the anthem playing in the background as he raises the flag and made the nation proud.

The story behind this win is far more emotional than we think. Nooh had promised his father four years ago that he would bring home a gold medal. Now after four years he finally has.

No wonder everyone is just pouring in praise for the sportsman. From fellow sportsmen to celebs alike.

Congratulations to our heroes Nooh Dastagir Butt and Shah Hussain on their outstanding gold and bronze medal achievements in Commonwealth Games. With the right support and help, sky is the limit for our athletes! Pakistan Zindabad! 🇵🇰 pic.twitter.com/kXiMK4qmu9

Well done Champion. Excellent Work @NoohDastgirButt You are a Real Hero. So proud of you buddy #GoldMedal #CommonwealthGame #Birmingham2022 pic.twitter.com/VYk4l9psFi

Even wrestler Inam Butt lauded him.

With Babar Azam going as far as to announce prize money for Nooh Dastagir Butt.

Pakistani celebrities are also feeling out of this world as they congratulated Nooh on achieving this glory for the nation.

This nation never ceases to surprise me should we not b receiving our champions home rather then suspending the weight lifting federation of Pakistan should we not be proud what are we trying to do? What is the purpose of doing this action now?This is atrocious #noohdastagirbutt pic.twitter.com/ZlxRSWmtGq

Taking pride in the stupendous victory of #NoohDastagirButt. He deserves all the accolades and love that’s being showered on him. #Commonwealthgames2022 pic.twitter.com/KdaG49qT6J

Are you proud of this sportsman too? What did you do to share your sentiments? Let us know in the comments below.