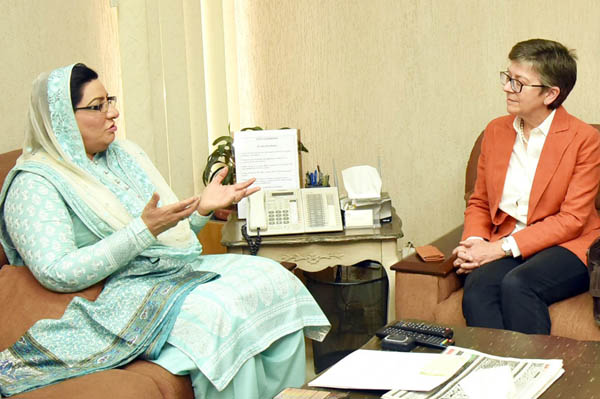 Dr. Firdous Ashiq Awan emphasized the importance of cooperation between Pakistan and Australia in their media and cultural sectors.

The Special Assistant to the Prime Minister on Broadcasting and Information met Margaret Adamson, the Australian High Commissioner recently. She opined that both nations enjoy an ever-growing people to people relationship.

She said that local TV plays and films can help the Australian people understand Pakistani culture and values easily.

“We would like our television plays and films to be telecast in Australia so that the people there could learn about the values and culture of Pakistan.”

She added that both nations share a passion for sports and arts.

“We need to further reinforce cooperation in these sectors.”

In reply to Firdous Ashiq Awan, the Australian High Commissioner Margaret Adamson welcomed the conclusion of the agreement between Pakistan and International Monetary Fund (IMF) and said:

“Pakistan is moving on direction towards economic development and this agreement would send a signal to markets across the globe that the country is determined to bring reforms.”

She added by saying that Australia will continue to help train Pakistani people and will support the development process.

”We welcome that Pakistan is moving ahead and we will continue our efforts to impart skills training for improvement of the human resource and supporting development process in the country.”

She said, “Prime Minister Imran Khan is committed for institutional reforms in Pakistan.”

Sherdil is Coming to US, UK, Canada and Gulf Countries

Earlier on May 8, Japan’s ambassador to Pakistan Kuninori Matsude had called on Special Assistant to the Prime Minister on Information and Broadcasting Dr Firdous Ashiq Awan.

Talking to the Japanese ambassador, Dr Firdous had said that Pakistan highly valued its bilateral ties with Japan and had added,

“We  would like Tokyo to further collaborate and invest in the fields of media and information.”

She had stressed the need for enhanced engagement with Japan in the fields of Information and Culture. Japanese ambassador Matsude had thanked the minister for appreciative remarks about Japan’s progress, development and had emphasized the need to strengthen formal cooperation between state television networks of both the countries.