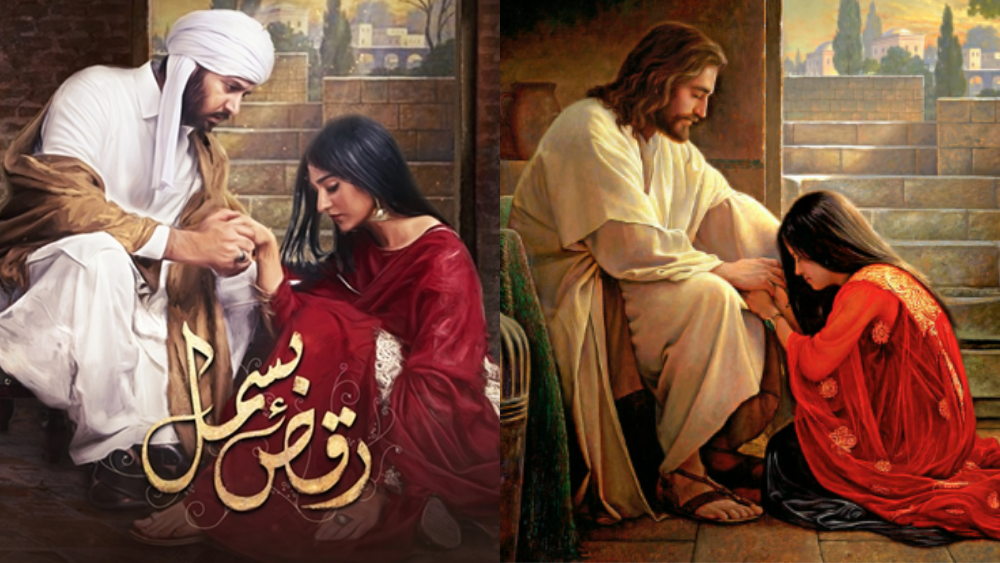 Raqs-e-Bismil is all the hype these days but the recent revelations have raised questions about the ‘originality’ of the drama. The allegations were made upon the similarity of the poster and an old painting by Greg Olsen.

People are of the view that the poster of Raqs-e-Bismil is a rip-off of Greg Olsen’s Forgiven. The poster features the main character Moosa (Imran Ashraf) in his pure white suit while Zohra (Sarah Khan) sits at his feet with eyes downcast. An open door can be seen in the background, giving us a view of stone walls and stairs, trees, and distant houses.

Now take a look at this painting by Greg Olsen. Titled as Forgiven, it was uploaded on Fine Art America‘s website on October 3, 2012. According to the artist’s description, the painting shows Prophet Isaiah giving hope to and forgiving people who have lapsed into sin.

The photos do not just appear similar but if you notice at the backdrop, it’s exactly the same. The positioning of the subjects and the color of their outfits are also the same.

Forgiven has been described as a representation of ‘burden’ resulting from one’s mistakes and poor decisions, leading to depression, sickness, sorrow, and loss. The woman in the red is emblematic of these mistakes.

“Whatever the cause of our tears there is one waiting to wipe away our tears and make us whole,” Greg said.

The similarities between both the pieces are mind-boggling and one is bound to assume that the drama’s poster is a plagiarized copy of the artwork.