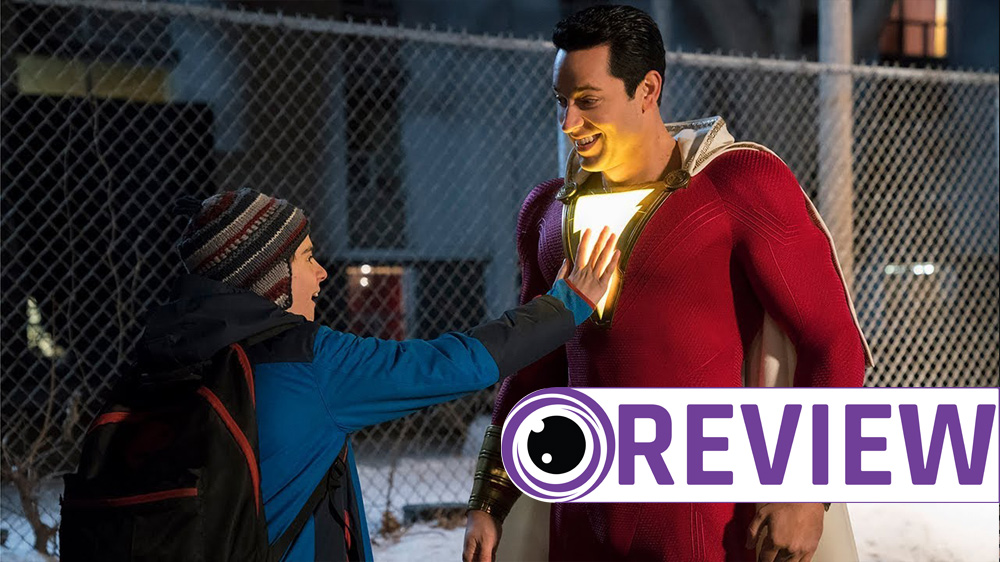 We know from the trailers that Shazam was going to be one big comedy of a superhero movie. Does it deliver on that premise? Does the storyline of the movie make sense (looking at you here Batman vs Superman: Dawn of Justice)?

For the folks who are still trying to decide whether to watch this or Captain Marvel, we have got you covered with this spoiler-free review here.

At its heart, Shazam is a movie about family, particularly foster families. We have a young orphan named Billy Batson (ably played by Asher Angel), who stumbles across an ancient power that makes him into an adult-sized superhero (say hello to Zack Levi). He’s still a child behind all that brawn though, and this setup never gets too stale. Both the performances are great.

Fans of the comicbook superhero Shazam will love how comics accurate he is – right down from the costume to the mannerisms and the jokes.

Now what happens when you get superpowers? Do you use it for good or do you use them for bad? But before you can do that, you need to figure out who you really are at your core. That’s exactly what happens with Billy Batson in the movie.

We get to see him meet his foster family, with one brother Freddy (Jack Dylan Grazer) helping him figure out his newfound powers. Heck they even YouTube some of their exploits.

For one-third of the movie, it goes on like this. And then comes the villain Dr. Sivana (played superbly by Mark Strong) when it finally sets up the conflict at the heart of the movie. Sivana wants to discover the source of Shazam’s powers and he literally leaves no stone turned given this goal.

One aspect where the movie tends to fall short is its treatment of Sivanna’s backstory.

As to how it all works out in the end, you will have to watch the movie.

The good news is – Zachary Levi as Shazam is the right kind of goofball superhero we wanted. Where Ezra Miller’s Flash in the Justice League fell flat, Shazam! has our hearts (how can you not love a guy that makes you laugh!?).

The acting to bring the story to life was great considering we had kids, two kids to be specific Freddy and Billy Baxton do most of the heavy lifting here.

The foster parents The Vasquezs’ were so adorable. The rest of the kids Darla,  Pedro, Mary, and Eugene did a pretty great job too.

They all have distinct personalities and have been shaped differently by their varied upbringings.

Henry Gayden, the screenwriter really made sure that there was enough emotion in the family that it drew audiences in.

David F. Sandburg, the director, has gotten the magic formula just right. He nailed the movie’s pacing and tone, with good laughs sprinkled throughout that don’t come across as too tacky. All the geeky references alone could make every kid (and their parents) chuckle.

The dialogues were just the right kind of cheeky and we are not here to complain.

Despite the fact that this movie is set in the same universe as Zack Snyder’s dark DCEU-verse, surprisingly, the light-hearted change of pace works rather well here.

As for the action sequences, they clearly do not disappoint. Shazam was not the CGI wonderfest that Aquaman was but its a really good DC movie.

In the long run, we realize that DC is now getting a hang of the whole connected cinematic universe thing. They’re making standalone films with effectively placed mid credit and post-credit scenes that ties the movies together.

If you are looking for a family-friendly movie that also appeals to comic fans, go watch Shazam! The movie does plod along in certain instances, but for the most part , its cohesive blend of humor, action and story will keep you entertained.

Another winning entry for DC. Shazam is a family-friendly movie that has enough for action aficionados, comicbook fanboys and even casual viewers. David F Sandburg gets everything right in his first outing, though the same cannot be said for the long-drawn out origin story of the big bad in Shazam. Highly recommended.