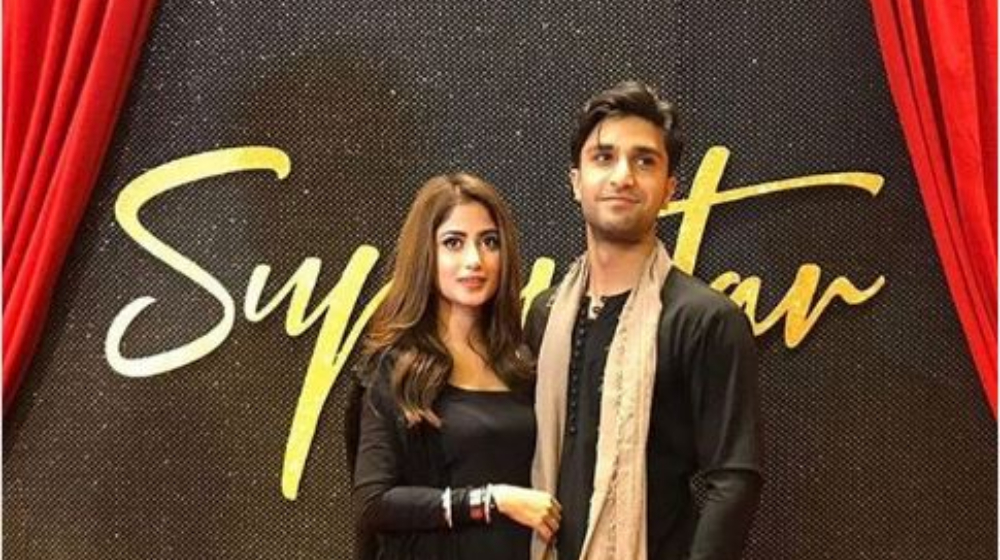 Behind the scene photos of real-life beaus Sajal Aly and Ahad Raza Mir have hit the Internet. Now fans are shipping the couple even stronger.

Sajal Aly and Ahad Raza Mir are one of Pakistan’s favorite on-screen and real-life couples. Following their engagement, the couple is working on a cross border web series “Dhoop Ki Deewar”.

When behind the scenes (BTS) pictures of the couple were leaked online, fans had #sahad and #ahadsajal trending on Twitter. Immediately everyone jumped to the conclusion that the pictures were from the set of their web series. This hasn’t been confirmed yet.

Fans Ship Sajal and Ahad Together, Yet Again

That didn’t stop fans from going crazy with it. The BTS photos from Sajal Aly and Ahad Raza Mir’s shooting coincidentally show a touching moment between their characters. This just had fans further melt into a puddle of feelings.

THE BIGGEST POWER COUPLE IN PAKISTAN. One bts pic and they're EVERYWHERE. started trending within seconds
#sahad #ahadsajal

Well this is quite surprising and my level of excitement is raising up the bar… Can't wait to see this cute couple working together…
feeling anxious to know about this drama or movie whatever it is. does any one know about it?#ahadsajal #sahad #sajalahad https://t.co/lMGFB1gGhn

My most favorite actress Sajjal💖 with Ahad The Handsome ♥️ once again after a long time going to appear don't know in drama or movie..
Lekin jo bhi hoga I will definitely watch..😍#ahadsajal #sahad #sajalahad https://t.co/eJYvTVlM9u

Particularly when Sajal Aly cast a soft glance at Ahad Raza Mir, we all went soft.

The way she is looking at him and look at her The beauty jumped out
I think it must be a TVC coz WY is coming next year
But whatever they are looking amazing as always
MA SHA ALLAH❤️#SaHad #ahadsajal pic.twitter.com/eFgMUReMl9

Parwaaz Hai Junoon film-maker Haseeb Hasan is directing the web series. Haseeb revealed that the duo will be playing the children of martyred colonels. This isn’t just any ‘Army brat‘ (term used for children of military personnel) romance. While Sajal plays a Pakistani, Ahad will play an Indian.

The web series is written by Farhat Ishtiaque and Aehsun Talish, and is currently being shot. The director revealed that they aim to wrap up the project by November. Dhoop Ki Deewar release date is not yet known.

Surprisingly both Haseeb Hasan and Aehsun Talish denied that this BTS photo was from their web series. Where did it come from then?