The seventh edition of Pakistan Super League (PSL) is upon us and it promises to be bigger than ever. Pakistani superstars such as Babar Azam, Shaheen Afridi, Hasan Ali, Mohammad Rizwan, Shahid Afridi alongside renowned international stars, David Miller, Chris Gayle, Rashid Khan, Liam Livingstone and Alex Hales are ready to light up the league once again. Let’s have a look at the top performers in each category throughout the PSL history. Here is the breakdown of PSL stats over the years: 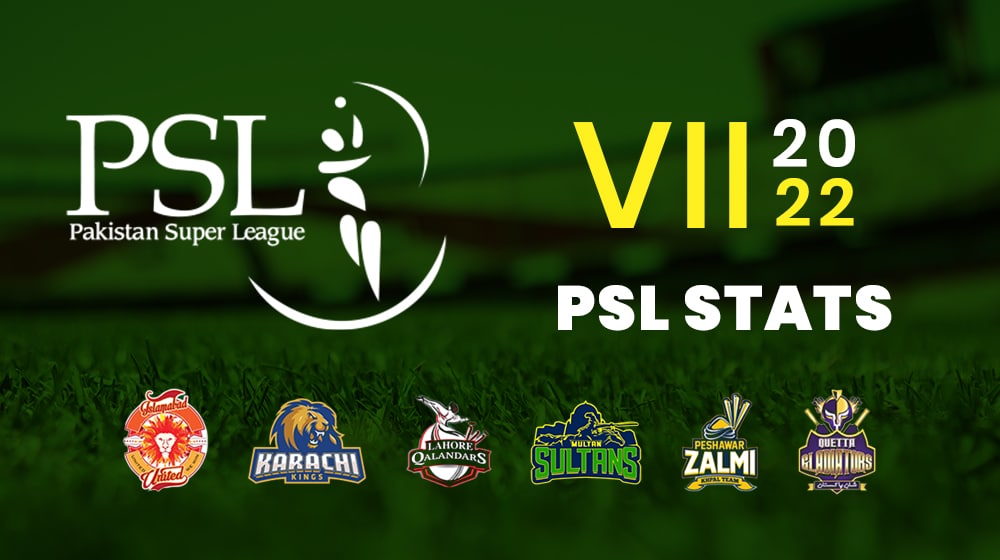 Pakistan’s all-format captain and Karachi Kings’ newly appointed captain, Babar Azam, is the leading run scorer in PSL history. The star batter will be determined to top the run-scoring charts in PSL 2022 and take Karachi to their second PSL title in history. Babar has scored 2,070 runs at an average of 43.12 and a strike rate of 121.55 in 56 innings in PSL.

Peshawar Zalmi’s veteran wicket-keeper batter, Kamran Akmal, comes in second on the list of most runs scored in PSL history. Akmal has scored 1,820 runs at an average of 27.57 and a strike rate of 136.84 in 69 matches. He has also scored three centuries in the tournament which is the most by a batter in PSL history.

Veteran middle-order batter, Shoaib Malik, comes third on the list with 1,481 runs at an average of 32.19 and a strike rate of 128.11 in 61 matches in the competition. Malik has scored these runs for three franchises, Karachi Kings, Multan Sultans and his current team, Peshawar Zalmi.

Hard-hitting Australian batter, Shane Watson, is the only foreign star in the top five scorers in PSL history. Watson has played for two franchises, Islamabad United and Quetta Gladiators. He has scored 1,361 runs at an average of 32.40 and a strike rate of 138.59 in 46 matches.

Lahore Qalandars’ explosive batter, Fakhar Zaman, rounds off the top scoring charts with 1,351 runs at an average of 27.57 and a strike rate of 133.49 in 50 matches he has played in the competition.
It will be interesting to see who will lead the run-scoring charts for PSL 2022 stats.

Peshawar Zalmi has dominated the wicket-taking charts as well. The veteran left-arm pacer, Wahab Riaz, has taken the highest number of wickets, picking up 94 wickets at an average of 19.61 in 67 matches. Wahab will be leading Peshawar Zalmi for the third consecutive season in the upcoming PSL 7.

Wahab’s partner in crime for several years, Hasan Ali, is the second leading wicket-taker in the tournament’s history. Hasan spent five seasons at Zalmi before moving to Islamabad United in the previous season He has picked up 72 wickets at an average of 20.88 in 55 matches.

Faheem Ashraf of Islamabad United is the third-highest wicket-taker in PSL history. He has picked up 55 wickets at an average of 18.94 and an economy rate of 7.84 in 39 matches he played in PSL.

Mohammad Nawaz is the only spinner in the top five highest wicket-takers in the tournament. He comes in at number four with 55 wickets at an average of 26.30 in 61 matches. Nawaz will likely represent Quetta Gladiators for the seventh consecutive season in the upcoming PSL 2022.

Karachi Kings’ spearhead, Mohammad Amir, is the fifth-highest wicket-taker in PSL history. He has picked up 54 scalps at an average of 29.59 and an economy rate of 7.38 in 59 matches. Amir’s future in PSL 7 is uncertain as he might be looking to move to another franchise in the upcoming season.

With the emergence of Haris Rauf and Shaheen Afridi, only time will tell who will become the leading wicket-taker in PSL 7 to lead the PSL 2022 stats.

Kamran Akmal is highly regarded as one of the finest players to play in PSL. He has hit the most number of sixes in PSL history, having hit 84 sixes in 68 innings he has played in the tournament.

Australian legend, Shane Watson, comes in at second on the list for most sixes in PSL history. Watson has been renowned all over the world for his six-hitting ability and he ruled the charts in PSL too with 81 sixes in 46 innings.

Islamabad United’s hard-hitting middle-order batter, Asif Ali, is one of the biggest six hitters in the cricketing world. He has hit an astonishing 68 sixes in only 46 innings in PSL history.

Karachi Kings’ opening batter, Sharjeel Khan, and Peshawar Zalmi’s veteran middle-order batter, Shoaib Malik, come in at number four and number five respectively. Both the batters have hit 58 sixes with Sharjeel taking less innings than Malik to do so. Sharjeel has hit 58 sixes in 34 innings while Malik has taken 57 innings to reach the landmark.

With Asif Ali, Iftikhar Ahmed, Azam Khan, Chris Gayle, and David Miller, PSL has a lot of explosive batters. Who will hit the most sixes and top the PSL 7 stats for most sixes in the tournament? Time will tell.

Prior to this, United scored 238/3 against Lahore Qalandars in PSL 4, which is the second-highest total in PSL history. Cameron Delport scored a magnificent century as he took apart Qalandars’ bowling unit at National Stadium Karachi.

Peshawar Zalmi registered the third-highest score in the same match against Islamabad United in PSL 6. They almost pulled off an incredible chase but ultimately fell short as they could manage 232/6 in their 20 overs.

Zalmi and United have put on quite a show over the years. This time it was Zalmi’s turn to take apart United as they scored 214/5 in 20 overs in PSL 5 registering an easy 48 run victory at National Stadium Karachi.

Which of the six franchises will possess enough firepower in PSL 7 to register the highest total in PSL history? We will wait and see.

Mohammad Nawaz has one of the safest pairs of hands in Pakistan cricket. He has taken 32 catches, the most by an outfield player, in PSL history. Babar Azam is second on the list with 30 catches, while Kieron Pollard has taken 24 catches. Mohammad Hafeez comes in next with 23 catches to his name and Asif Ali rounds off the top five with 22 catches throughout PSL history.

Have a look at our PSL Points Table page to see where your team is standing.