Warid won the GSM license for operations in Pakistan from Pakistan Telecommunication Authority by paying 291 Million US Dollars, in 2004. Operating in GSM 900/1800 network, Warid officially launched its services in Pakistan on May 23, 2005, with covering 28 cities in Pakistan; believed as the largest

coverage by any network on its launch date. With initial investment of 150 million US dollars (reported here) Ericsson Pakistan rolled out Warid’s network in only 10 months with capacity of 1.5 million customers over the network, inbuilt EDGE, GPRS and 3G expansion capabilities.

Pakistani Telecom sector was pulling the gears in 2005, with such a response from market; soon Warid had to face capacity problems. However with investment of almost 1 billion, in its first year, Warid managed expand its network and grabbed 3.4 million customers before first anniversary, almost 10 percent of market share and reached 9.7 million mark in April 2007, before reaching its second years of cellular operations in the country.

In year 2006/07 Warid had started shining with full glow, expansions in other regions of world, including Bangladesh and Congo raised their stock value substantially. In result Warid entered into a successful deal with Singtel of Singapore and sold its 30 percent shares, valuing 758 Million US dollars on June 30th, 2007 under a definitive, undisclosed agreement. Warid kept the rights of wholly managing the company, while 2 members were allowed to sit in board of directors’ table. The deal revealed that total value of company had hit unbelievable US 2.9 billion dollars mark.

Warid claims that they have largest number of postpaid customers in Pakistan. They have significantly focused on quality of their network. However, occasionally, Warid costumers face network load due to free offers; such as Free Warid to Warid Calls on previous Eid, then unlimited number of SMS with only 5 Rs per day rent (Warid Zoom) etc. PTA’s recent results (can be viewed here) can help you better understand the network quality of Warid Telecom.

Warid’s sister concern, Wateen Telecom had also entered into WiMAX market in early 2007. Wateen’s US 70 Million Dollars Fiber optic network had been rolled out (Reported here). It enormously helped Warid to independently carry its communication throughout the country.

Warid saw some bad time when CEO Hamid Farooq resigned, reportedly due to some domestic reasons almost in November 2007. Things went worst when the acting CEO (Who was CFO) also resigned and joined Ufone to fill there the empty CEO position. Previously Warid CIO had left along with him 7 other senior managers also left company (reported here)

Mr. Marwan Zawaydeh joined Warid as CEO and has been doing pretty well. Recently he has announced the upcoming investment of US 1 Billion Dollars for network expansion (reported here).

Like always, Warid Telecom has been celebrating their anniversary by offering special pricings and free bundles. Their website is currently dead (till the filing of this post), however, through TV advertisement we know that these celebrations will span three days.

Warid had given away luxurious car through a lucky draw on its first anniversary. 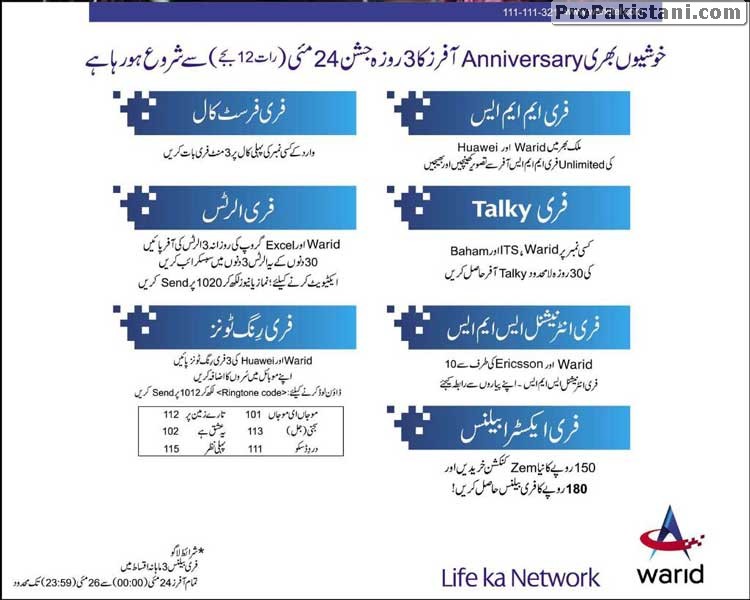