Enriched with enhanced data capabilities, Apple’s new iPhone 3G has hit the stores in more than 22 countries world wide, sales started with Japan/New Zealand and ending the drama in west shores of US in Seattle and California. Technology and Gadgets blogs remained engaged with iPhone discussions whole day long, but what these discussions mean to a Pakistani cellular user? I am afraid nothing much.

Along with Pakistan, In the many other Asian countries, ads and banners were seen in markets for unlocked iPhones and services to unlock them. Phone sellers (retailers and distributors alike) are already seen taking orders for the new iPhone, who estimated its arrival on the gray market in about a week.

On other side, world wide launch saw a drew thousands in North America, Asia and Europe, with customers creating a half-mile line in Tokyo, braving summer heat in Madrid and scouring Toronto for the shortest queues. Lines stretched kilometers with thousands of buyers in queue to get their iPhone. 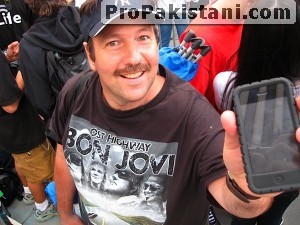 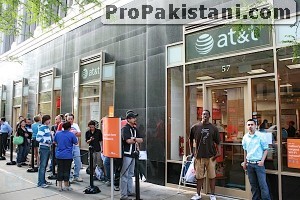 Through the process stock cleared, however, many faced activation problems that marred the launch of the new 3G iPhone – alongwith, Apple admitted that its new data-synchronisation service, MobileMe, also suffered from some technical difficulties.

Pictures and Video Via: Engadget