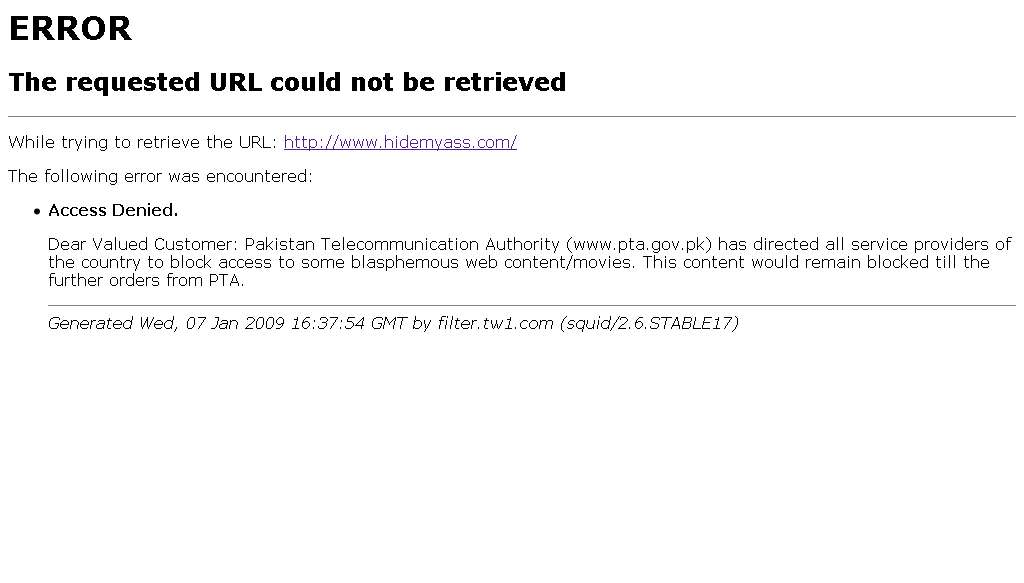 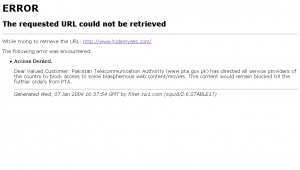 Pakistan Telecommunication Authority is famous for blocking access to various web portals including YouTube in Pakistan. It seems only a matter of time when PTA blocked access to certain premium Pakistani and foreign web portals.

It’s not a long ago, when PTA blocked WiredPakistan for countless number of times; and for no reason. Some news and politics blogs were also blocked because they had some material against MQM leader Altaf Hussain.

Also if we bring recent events into consideration, we see that PTA is now after free speech and blog sites. For example; PTA blocked many links and URLs, that disclosed the photos depicting the luxurious life of Governor Punjab Salman Taseer and his family, in the name of so called “best interest of the country”. And umm… is it really a matter of country’s interest?

Several campaigns were carried out in order to protest the curbs on free speech. They highlighted proxy websites as they used to allow internet users to access a blocked website anonymously. This was indeed a good idea to remove the fear of being blocked. Now guess what? The worst of all, PTA is now being smart enough and they have now started blocking proxy websites too.

Many famous proxy sites including HideMyAss.com have now been blocked. Up given screenshot reads like following

“Dear Valued Customer: Pakistan Telecommunication Authority (www.pta.gov.pk) has directed all service providers of the country to block access to some blasphemous web content/movies. This content would remain blocked till the further orders from PTA ”

What you guys think about this move of PTA? Do you think it’s wise? In my opinion, it’s not wise at all. Everyday, almost 100 new proxy sites get online, how many proxy sites can PTA block? Can they block all? No of course!

I just hope that PTA doesn’t ask ProPakistani to take down this post of mine : -d