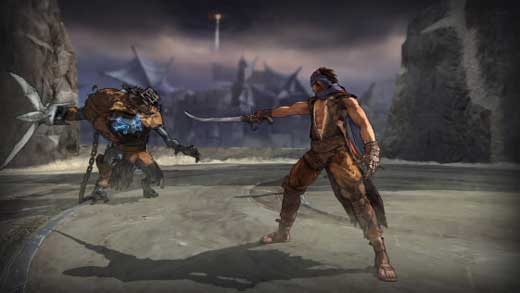 This master piece was released on 2nd December 2008 for XBOX 360, PlayStation 3, and on 3rd December 2008 for PC (Windows). This episode is quite different from Prince of Persia games, not only in terms of Controls but the game play as well.  Combats also differs from SANDS OF TIME. With this latest release, Prince of Persia 08 has got incredibly polished with neat graphics. Game has got modern and unique design and appearance. By the way Price of Persia was awarded on 19th February 2009 for Outstanding Achievement in Animation in the ceremony of 12th Annual Interactive Achievements Awards, also included in TOP 50 Games of 2008.

Prince of Persia is set in ancient Persia (Exact location is not Specified) Story contains battle between two gods, the god of light (Ormazd) and god of darkness (Ahriman) and prince accidentally became a part of this battle. Prince was finding his donkey in a sandstorm when he finds Elika (Princess of AHURA) – she was running from her father. Her father is a solider of Ahriman. In short Prince has to seal the Ahriman and to heal the fertile grounds which are occupied by the Ahriman with the help of princess Elika and her magical powers Elika is gifted with magical powers from the Ormazd (The God Of Light).

Elika is solider of Ormazd and she can destroy the black gates and heal the fertile grounds with the help of her magical powers. So Prince has to fight with the soldiers of Ahriman with the help of his Combos and Acrobatics on every ground and, He and Elika has to seal Ahriman by healing all the Dark grounds and bring back the light on those grounds

When I started playing prince of Persia 08 I found that version contains a lots of new changes. Game has exceptional story and UBISOFT designed a new Prince of Persia and Rules are quite different because this time prince is having a partner with him named Elika. In this Episode prince never dies, Elika is always there to save the Prince during the war with enemies or during his journey whenever prince slips or fails to jump Elika grabs his hand and saves him with the help of her Magical powers.

During healing the Grounds player has to fight with different enemies variously and player has to use combos and Acrobatic against the enemies (Soldiers of Ahriman),  player can make the Combo Tree by changing up the different combos together (Combo tree can be seen by pausing the screen and getting into the options tab). There are 1001 light seeds are given in the whole game and for unlocking the different power of Ormazd Player has to get them.

There are four kinds of power of Ormazd

Each power of Ormazd will be more efficient then the pervious once, Light seeds can be only collected when the Ground will be healed

Well I must say that the Game is too easy to play and beginners can easily play this one.  Game is not too much long but it is quite long enough to play and has got some interesting puzzles such as Windmill puzzle, Royal Palace puzzle and combats in it. Over all game delivers allots of entertainment to its players and keeps their interest alive for Prince of Persia. UBISOFT Team has delivered best game of the years towards Their Fan.

MINIMUM REQUIREMENT OF PC FOR PRINCE OF PERSIA 2008