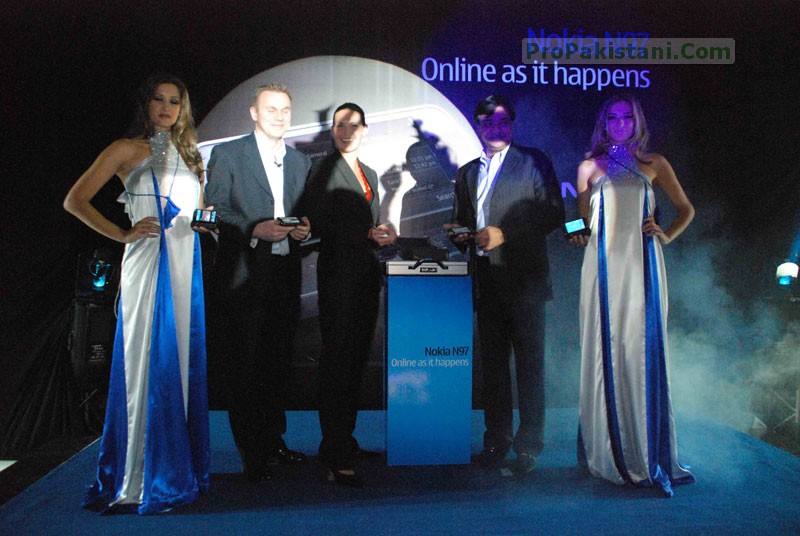 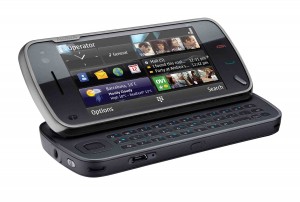 The highly anticipated Nokia N97, Nokia’s flagship Mobile computer has been announced in Pakistan after its global launch in 75 countries worldwide. Along with a tilting 3.5″ touch display, QWERTY keyboard and a fully customizable home screen, the Nokia N97 will offer instant access to the full range of Ovi services. The N97 is expected to be sold in Pakistan at a retail price of PKR 58,000 only.

The device was announced at a glamorous press event where two European models brought the phone at the venue and the Finnish First Secretary, Deputy Head of Mission H.E Miia Rainne handed over the phone to the GM Nokia Pakistan Imran Khalid Mahmood. Also present at the ceremony was Henri Mattila, Head of Category Marketing, Nseries Middle East and Africa

Speaking at the occasion, Imran Khalid Mahmood, GM Nokia Pakistan said, “Delivering on Nokia’s vision and thought leadership based on mobile convergence, Nokia Nseries has aimed to present the best in class mobile computers to its internet savvy consumers. Today, we take great pride in introducing the newest addition to Nokia Nseries – Nokia N97. We have combined the most-advanced Smartphone capabilities in this device to enhance the internet entertainment for our consumers and at the same time ease-of use with one-touch access to their favourite online content.”

“The Nokia N97 is an important step towards our vision of delivering a highly personalized Internet experience,” Henri Mattila said. “Fuelled by a multitude of music, maps, games, media and applications via Ovi, the Nokia N97 transforms the Internet into an experience that’s completely tailored to the tastes and interests of its owner.”

The Nokia N97 is Nokia’s first device to feature a personalizable home screen, which can be customized with a range of widgets which bring live information directly to the device. These widgets include key social networking destinations like Facebook and Hi5, news services like the Associated Press, Bloomberg and Reuters, as well as shopping and weather information. The Nokia N97 is the first device to ship with the Ovi Store, which offers easy access to applications, games, videos, podcasts, productivity tools, web and location-based services, and much more. Ovi Store has paid and free content from a range of global and local content providers and developers, including Paramount Pictures, Facebook and Qik, as well as a selection of Twitter applications.

The beauty of this Nokia device is that taking it out of the box is just the beginning. As with any computer, people can constantly improve and refresh their Nokia N97 with new features, functions and fixes so they can do even more with the device. An exciting roadmap of new features and functions is planned to roll out in the second half of 2009.

The Nokia N97 also has direct access to the huge catalogue of music in the Nokia Music Store. With multiple high-speed connectivity options and 32GB of storage (up to 48GB using a microSD card) it is possible to directly download and store tens of thousands of songs on the handset. And you can listen to your favourite music on the Nokia Bluetooth Stereo Headset BH-905, which Nokia also launched today. This headset brings crystal clear sound, eliminates background noise, and is the ideal accessory for listening to music and making calls on the Nokia N97, as well as being compatible with a diverse range of other mobile and music devices.

High-quality images and video clips at 30 frames per second (fps) can be captured using the 5 megapixel camera with integrated Carl Zeiss optics. Images can also be geo-tagged to specific locations and shared instantly with friends or uploaded online via Ovi Share, Twitter or Flickr.