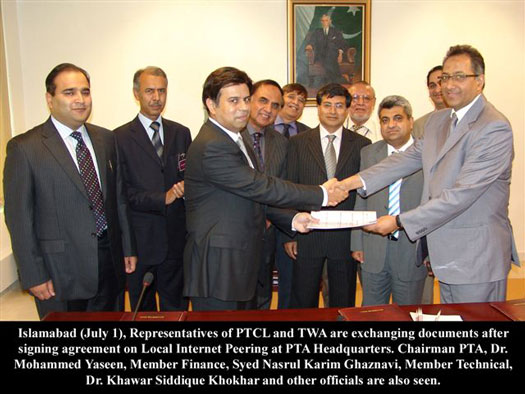 In a joint ceremony held at Pakistan Telecommunication Authority (PTA) Headquarters, PTCL and Trans World Associates (TWA) have signed an agreement on establishment of local Internet peering for routing of domestic Internet traffic. It was decided that initially the link between two parties will be of Fast Ethernet providing a peering capacity of around 80 to 90 Mbps.

This arrangement will bring cost efficiency vis-à-vis international IP bandwidth by restricting local internet traffic within the country. Besides that, it will also provide routing efficiency especially in accessing the locally hosted websites. Considering as a major step towards Information Communication Technologies (ICT) revolution, the arrangement will also have an indirect impact on proliferation of local internet content development in the country.

In continuation to its role as an industry facilitator, PTA was mutually working with PTCL and TWA for establishment of Local Internet Exchange Point(s) in the country. In this regard a number of discussions and deliberations were carried out by PTA and necessary solutions for implementation of said peering arrangements were conversed. Chairman PTA, Dr. Mohammed Yaseen in his remarks appreciated the efforts of the ICT Directorate of PTA, PTCL and TWA for working on the project and said that this initiative would bring a remarkable effect on Internet industry of Pakistan. The Chairman also highlighted that the ICT Directorate at PTA has embarked on several other projects that would soon bring fruitful benefits and productive results for the consumers and the industry. PTCL and TWA valued PTA’s exertions and ensured their continuous corporation for the betterment of Internet industry.