Telecommunication Services in Azad Jammu & Kashmir and Northern Areas were launched in 1976. As the region had difficult terrain and extreme weather conditions, an army organization was considered to be a suitable company to efficiently operate there.

Thus in July 1976, Special Communication Organization [SCO] was established to plan, develop and operate telecommunication network in AJK and NAs, and for about 24 years, the SCO provided telecom services to 3.5 million people of AJK and 1.5 million residents of NAs, thus covering a combined area of 158,289 Sq. kilometers.

Until the catastrophic earthquake of 2005, the SCO maintained its monopoly being the single largest telecommunication network provider in AJK as well as NAs, having footprints of PSTN, GSM, CDMA and internet provision. However, later on, subsequent to the cabinet’s decision for de-regulation of the sector in these areas in 2006, PTA issued licenses to certain cellular, FLL and WLL companies, hoping that the step would augment the government efforts to extend and access of affordable telecom services to the underserved areas.

Today, almost 82% of the area in AJK and NAs comprising 270 cities/towns and villages remains under the coverage of telecom service providers.

To ensure access to the basic telecom services for the people of Neelam Valley, PTA has initiated the process of consultations with major operators of AJK and NA. Owing to difficult terrain and close proximity with the border, this area requires special efforts by the companies, and hopefully, telecom services will soon reach this farthest area of Pakistan as well. 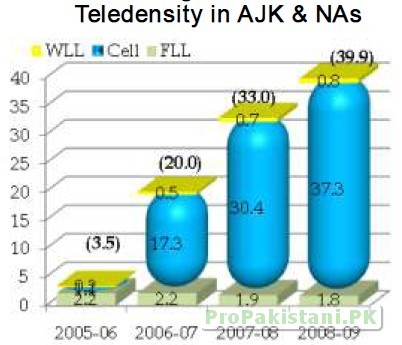 In AJK and NAs, teledensity remained considerably low uptill de-regulation of the services in 2007. With a teledensity of 3.2 percent in 2005-06, the region had been lagging far behind from the rest of the country in terms of telecommunication services.

However, with the advent of cellular services in AJK and NAs, a rapid growth in teledensity was observed.

At the end of fiscal year 2008-09, teledensity of the area stood at 39.9%. This shows a healthy growth rate of telecom services despite the fact that the new operators are still in their infancy. The cellular sector further tightened its grip on the overall teledensity of AJK and NAs by showing 18% growth last year.

The FLL further declined to 1.8% from the previous year’s 1.9%, while the WLL penetration improved from 0.7% in 2008-09 to 0.8%. With the formal launch of the WLL services in November 2008, the new entrants are expected to bring healthy competition in the market, improving the FLL and WLL penetration levels to greater proportion. 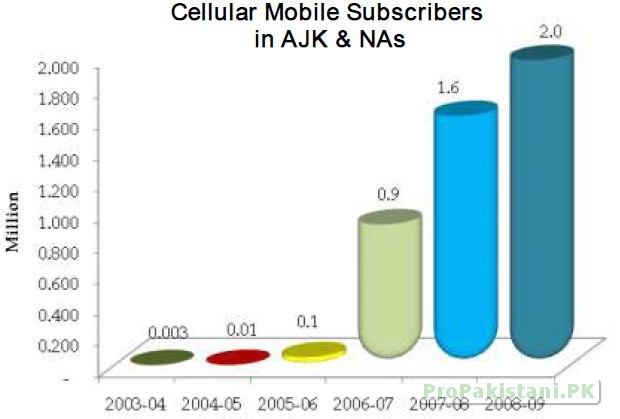 The cellular industry is the nucleus of AJK and NAs’ telecom industry, as any rise or fall in its subscriber base leaves a huge impact on the telecom proliferation in the areas. The cellular industry has been growing at a remarkable pace since its launch, and by the end of June 2009, the total subscribers’ number reached to 1.94 million.

To cover 33% of population within two years is indeed an extraordinary effort by the cellular companies. In terms of growth rate, the SCO leads by a long margin from its competitors by achieving an astonishing 126% growth mark. Telenor follows it with a growth rate of 31%, while Warid and Ufone have almost similar figures of 12% and 11% respectively.

Mobilink is the only casualty, reporting a decline of 18%. The main reason of this decline is the loss of subscribers in AJK as positive growth has been shown by Mobilink in NAs. 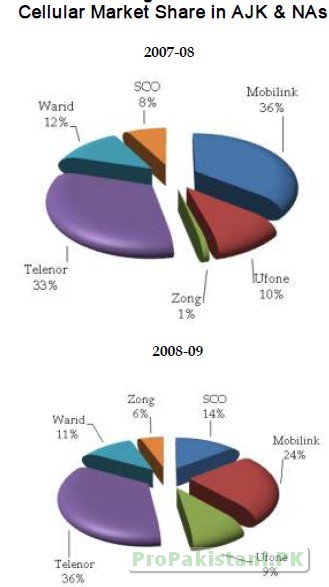 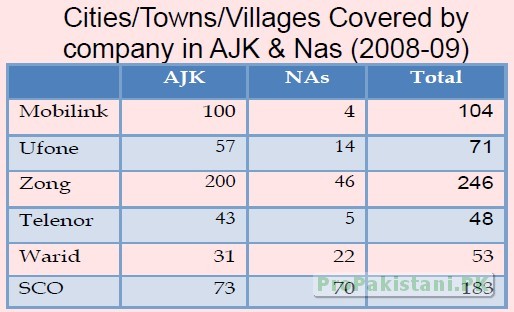 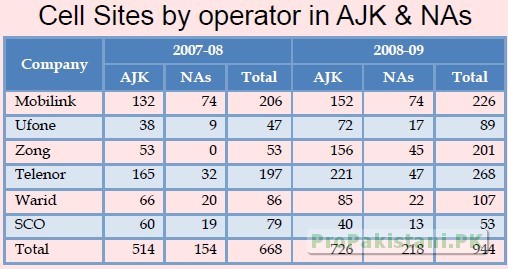 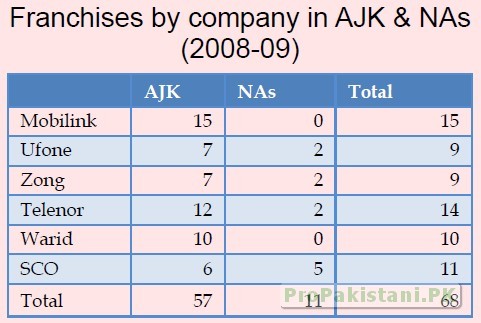 Note: All stats are till June 2009, and are provided by PTA