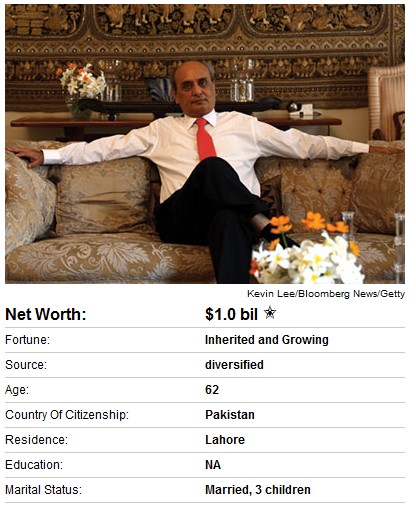 Forbes today released a list of the top billionaires in the world, where Bill Gates lost his crown to Mexican telecom tycoon, Carlos Slim.

There is a good news that Business Tycoon Mian Mohammad Mansha has made his slot in Forbes billionaire list, first Pakistani to achieve the glory.

Mansha’s Nishat Group is Pakistan’s largest exporter of cotton clothes (for brands like Gap) and nation’s largest private employer; also invests in power projects, cement and insurance. Smart bet in banking: Won a controversial bid for Muslim Commercial Bank during the country’s privatization push in 1991. Sold more than half of his MCB shares for $900 million May 2008.

Forbes is an American Magazine, famous for its lists, including its lists of the richest Americans (the Forbes 400) and its list of billionaires.

Forbes recorded major up and downs in its billionaire list due to recession and many relating factors, resulting Asians to rise – and diluting the domination of Americans in the Billionaire list.