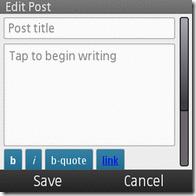 To remain in-tact with wordpress blogs, Nokia handset users were tired of trying out WordPress Applications for their Nokia smartphone.

Today, Automattic (the company behind WordPress) has announced its official application for Nokia Devices and is available is now live on the Nokia’s Ovi Store for Mobile apps.

Currently supported phones include N97 Mini and X6. Application Supports WordPress 2.7 or higher (WordPress.com and self-hosted both). It’s not yet compatible with Symbian3 devices like the N8, C6, C7

WordPress of Nokia is said to be more advanced than WordPress for iOS, as the latter still lacks text formatting (i.e. bold, italicize, blockquotes, etc.) as well as support for WP.com stats.

Head over to the Ovi Store to download it if you’re a Nokia user.