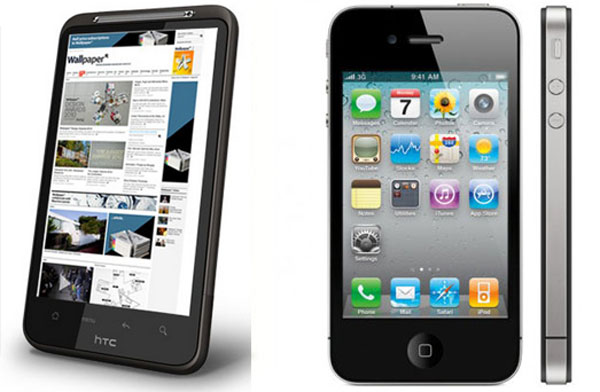 The competition in the high end smart-phone is heating up. HTC recently released its Desire HD and talks have it, that it’s an iPhone killer. I’ll take you through a step by step comparison to see if there’s any truth to it.

When it comes to looks, iPhone mostly wins hands down. And the iPhone 4 carries on that tradition. Its currently the slimmest phone in the market, claims Apple. It has a 3.5 inch 640×960 LCD screen that blows away the iPhone 3G when it comes to richness of the colors, brightness, clarity of text and pixelation. But HTC has outdone Apple with a massive 4.3 inch 480×800 LCD screen on the Desire HD. Its dimensions are much larger than the iPhone, but it’s a tradeoff of the huge screen.

The app store is one of the best features of the iOS4. With over 250,000 apps on sale, one can find an app for anything that can be imagined. The Desire HD on the other hand runs on the open source Android.

At this point of time the Android store has 100,000+ apps. But the number of apps offered for the android is rapidly increasing and the app store will have a worthy competitor very soon.

But for now, in the apps category, the iPhone has the edge. Another thing worth mentioning is that, most of Android apps are open source (around 67%), and app installation is much easier than on the iPhone, on which it can be downright hectic.

The iPhone 4 has a simple and elegant user interface. It’s easy to navigate and everything is presented as simply as possible. And it manages to do that while retaining its smooth and crisp transitions for the animations. In addition now apps can be organized into folders and it also supports multi-tasking.

The Desire takes a different approach; you can have 7 different home-screens which make up a scene. And one can have 20 different scenes. Mind you, each of these home-screens can be customized with widgets, icons and apps to your hearts content.

It does a wonderful job of managing your social networks amongst other things. While Apple users may get restricted as to the amount of tweaking they can do, the range of customizations available for the Desire HD are countless.

Both have 1Ghz processors which performance wise, are equal. Although the iPhone uses a customized A4 Chip. Apple have been known to under-clock the processor to save on battery power so the main difference between these devices is that the Desire HD offers 768MB of RAM compared to 512MB RAM in the iPhone. So it packs more punch than the iPhone.

The iPhone is available in 16GB and 32GB. And the Desire comes with 1.5GB built-in memory and a 8GB microSD card which is upgradable to 32GB.

The iPhone has a 5MP camera but the Desire HD once again outclasses it with a 8MP camera. In addition it has dual flash and a lot of options to play with the photos. Both phones are capable of shooting video at 720p.

Another plus for the Desire HD is its ability to play flash content and support for FM radio. In the sound department, the Desire HD once again takes the cake with the addition of Dolby Surround Sound which enables you to listen to crystal clear sound.

On paper, the iPhone should last longer than the Desire but chances are that with normal to heavy use you’ll have to recharge the phone everyday. That being said, the iPhone does have a longer lasting battery. But you can always swap the current battery for a high capacity one in the Desire HD. However one can’t do that with the iPhone non-removable battery.

Using these phones in Pakistan:

Both these phones support 3G technology as well The iPhone can be used for video calling in Pakistan. It requires Wifi and works over 3G as well as EDGE, the latter being available here. However you’d require iPhones at both ends to use the video calling feature.

Desire HD can be used with Google maps to use as a GPS navigator, and Google has most of Pakistan’s major cities almost fully covered. There is a reception problem reported with the iPhone 4, but it’s with 3G networks so you don’t really need to consider that when buying it.

By the time 3G will be introduced in Pakistan, which will be soon I hope, since in IT we are progressing by leaps and bounds, the error will have been fixed. Because Apple claim it’s a software based error and it will be addressed in the next firmware update.

The prices will of course vary from dealer to dealer and depends on where you live. One of the better online places to get these phones is homeshopping.pk.

This site has been reviewed at propakistani before. And I know from personal experience that they provide competitive prices.

Lastly, I know that the Iphone holds a special place in the hearts of many people, with many opting for it because of its cool factor; there are good alternatives to it too, with the Desire HD leading the race.