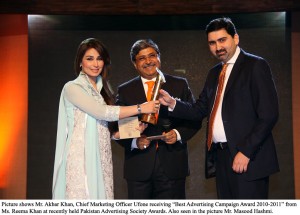 Ufone that was recently claimed as the best telecom Brand in Pakistan by Nielson survey has won the best advertising campaign award 2010-2011 – given by Pakistan Advertising society (PAS).

They said that a total of 105 entries were received across 18 different categories from which 41 nominations in 14 categories made it to the final round.

The PAS Awards were sponsored by Jang Group, Geo TV Network, Unilever Pakistan, Midas Advertising, HBL, Pepsi Co, Telenor and Mobilink. The event was supported by the All Pakistan Newspapers Society (APNS) and the Advertising Association of Pakistan (AAP).

Ufone won the award for Best Advertising Campaign of the Year award for their TVC “Teri Mehrbani”.

The PAS was formed to promote the value of advertising and to ensure that the recipients realize the importance advertising has in economic development and to spread how imperative it is for the consumer to have options to choose from.

Over the last few years advertisers have taken a number of steps in order to stand out in the hope that consumers will choose their brands over those being offered by competition, but one brand that has stood out no matter what industry is ‘Ufone’.

Ufone has given humor as a platform a whole new meaning, the unique yet highly amusing advertising with concepts never before seen have taken over the hearts of the nation. It is due to the element of excitement and humor that today Ufone’s ads are loved by all no matter where they reside around the country.

Most importantly a number of these adverts are true to life hence viewers can relate to instances in their own lives.

The team of actors/comedians in their advertising have each become household names which has played an important role in the likeability towards the brand itself.

Mr. Akbar Khan Chief Marketing Officer Ufone said that this is indeed a milestone for Ufone. Pakistan is a country with a growing and diverse advertising sector and we get to experience a number of challenging and unique advertising practices on a daily basis. The team at Ufone strives to be the best at what we do and this award is recognition of our hard work. Ufone always has and always will bring a smile to the people of Pakistan.