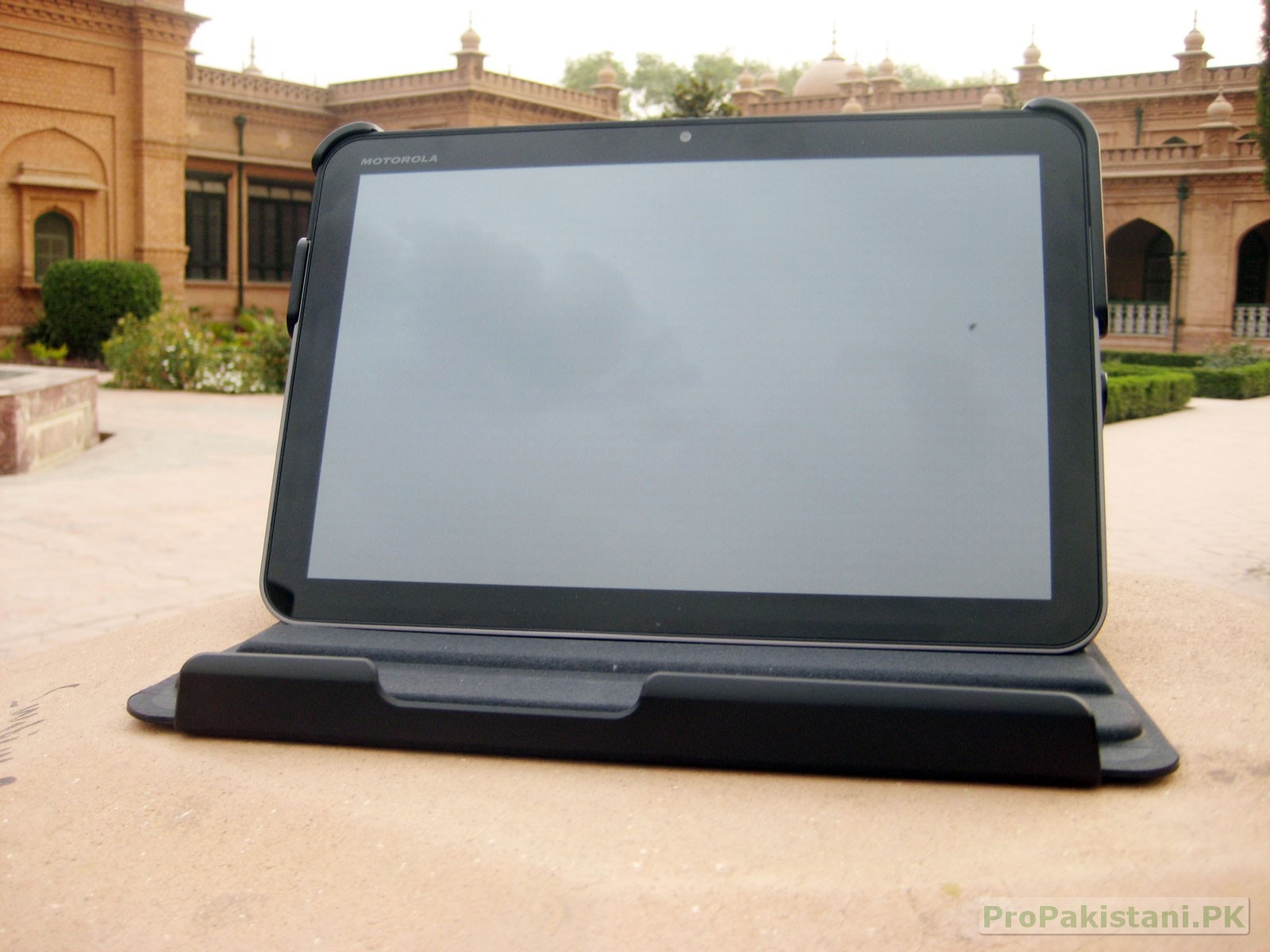 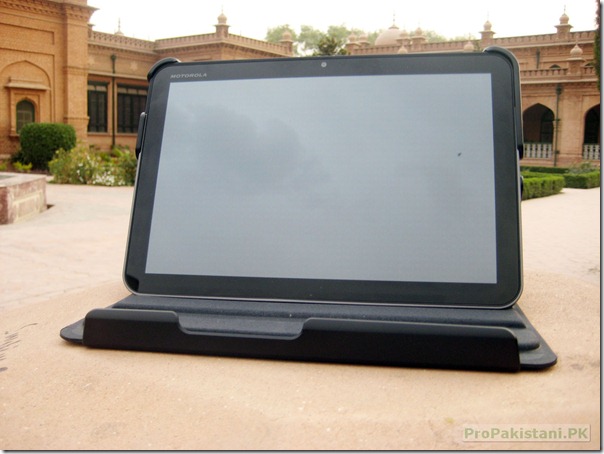 Here’s a quick rundown of the Xoom’s Specs:

First thing you will notice about the Xoom is that it’s a bit on the heavy side (708 grams) and slightly thick but it alternatively signifies the high build quality & reliability.

There are no hard buttons on the front. The volume buttons are on the left side and a conveniently placed power button on the back. The placing of the power button may seem odd but is quite convenient once you adjust your finger to its position, in landscape mode of course, in portrait mode you have to find it. 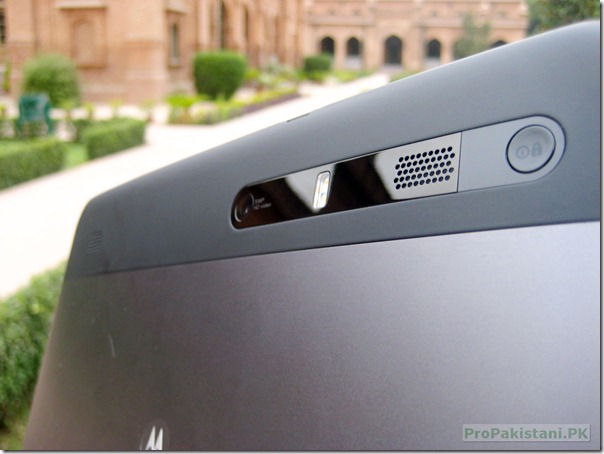 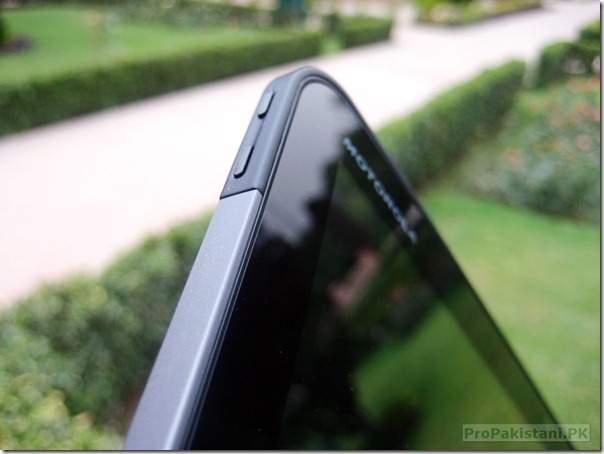 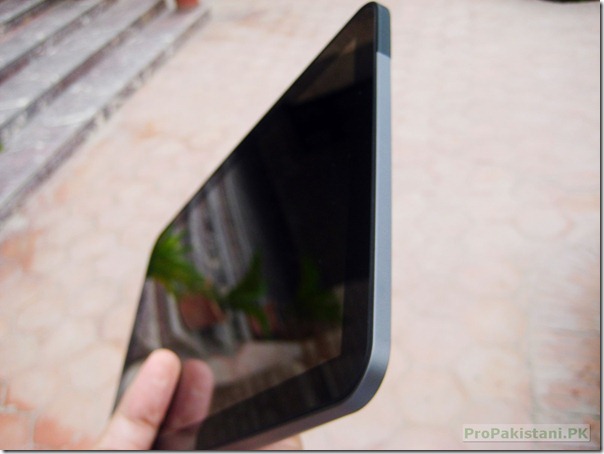 The lower end has a MicroUSB slot, Charger slot & HDMI Out.

There’s a 2MP webcam on the front right in the center, notification LED’s and a 5MP camera on the back with Dual-LED flash.

The tablet is capable of recording/playing video at 720p (that’s 1280×720 resolution). The microphone is also at the lower end. On the top you’ll get a 3.5mm audio jack and an SD card slot (which doesn’t work as of yet & is subject to Android’s support). 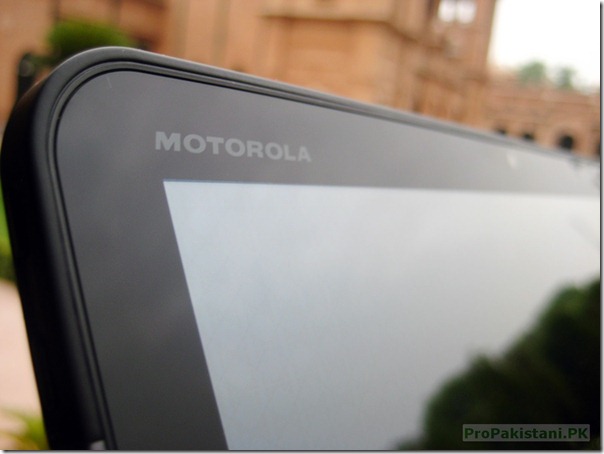 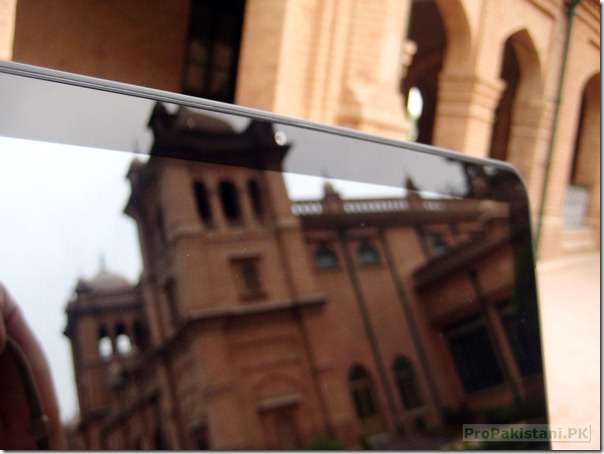 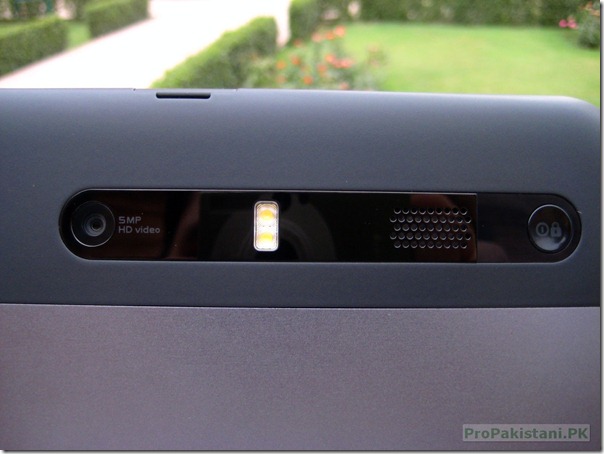 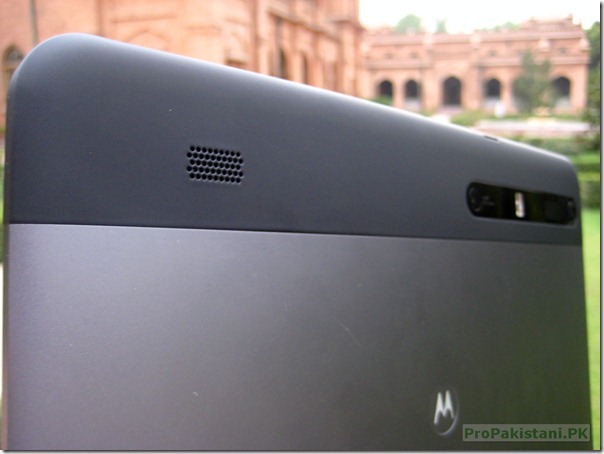 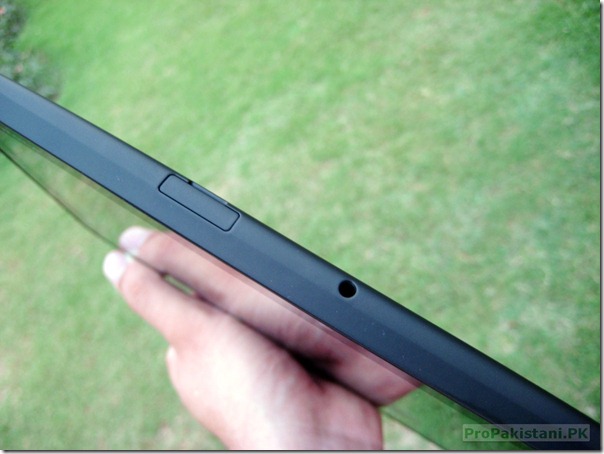 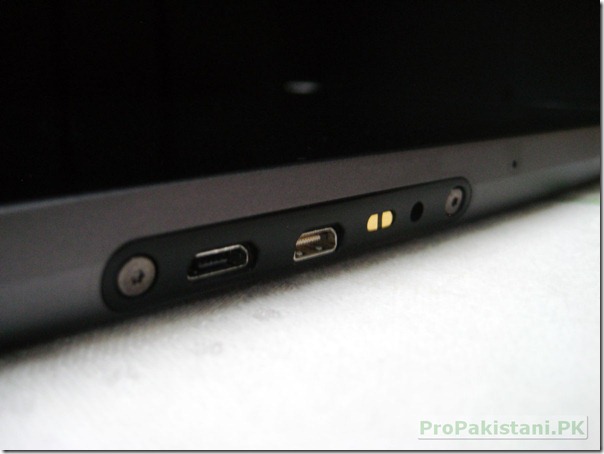 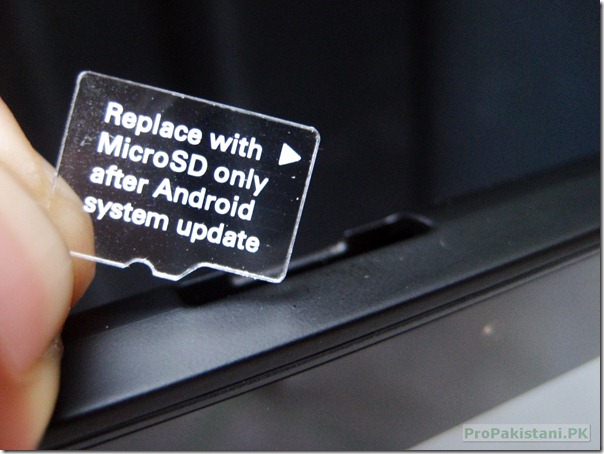 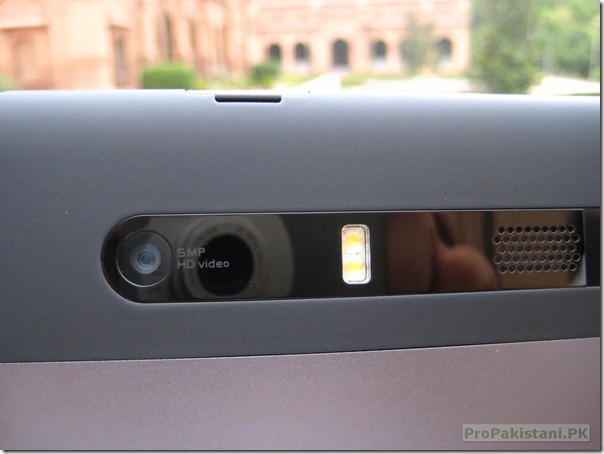 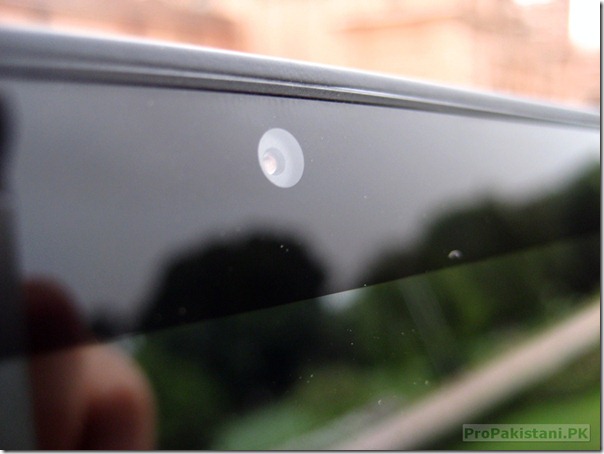 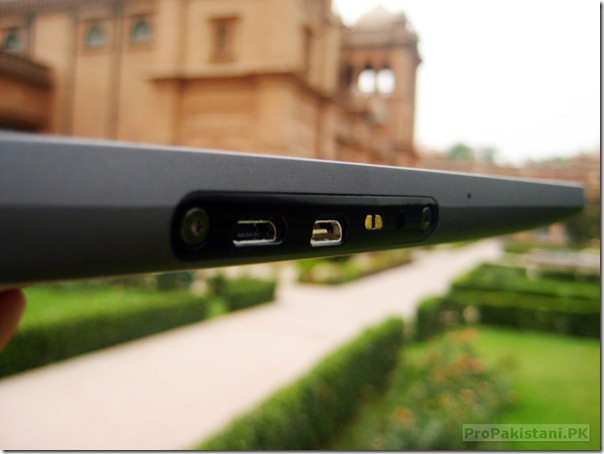 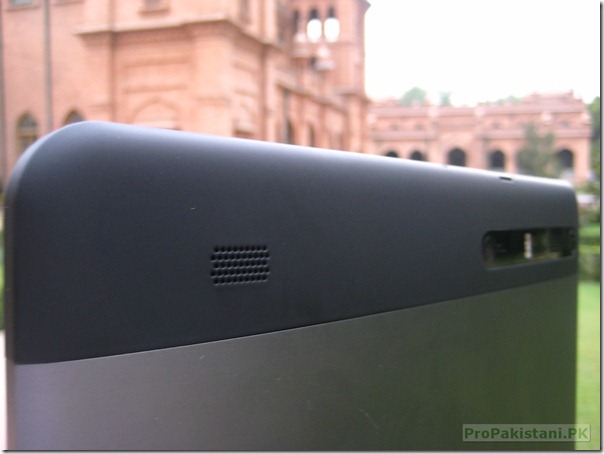 The Xoom is beautiful; it has great build quality and gives a strong feeling of being reliable.

On the other hand it’s a little heavy and the volume buttons require twice the pressure to push, a definite annoyance.

Auto-brightness works well, though I believe it adjusts to 10% less brightness than you need for the situation. Like the Blackberry Playbook the screen is a fingerprint magnet, so keeping a cleaning cloth is handy at times.

One thing to note is that the screen is very reflective & behaves like a mirror. 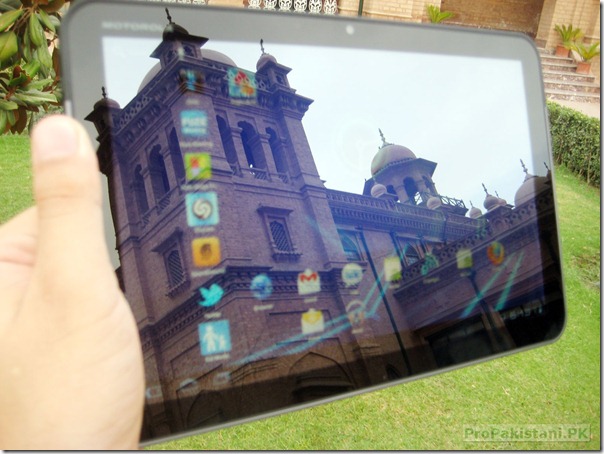 Wi-Fi works great too (this one is a Wi-Fi only model, no 3G). Signal strength is good, better than Smartphones and a bar below your laptop’s.

Battery life easily gets you through the day with Wifi on, browsing, emails and some music/video playback with enough juice left to get you through the load shedding at night.

When locked it uses almost zero power. Battery life is a strong point here; Xoom will be your companion on lengthy trips or during long power outages.

Some reviews placed the battery timing at 8 hours straight with video playback, i didn’t test that.

The camera is good but not the best. If you are outdoors and there is good light, the pictures are going to be great. Low light pictures are grainy, simple.

A plus point for the camera is the Dual LED flash; it’s very bright and is very helpful in complete darkness.

Video quality is good, 720p is actually too good. Watching the recorded movies on PC or on the tablet itself is a joy. If it didn’t look odd holding a 10 inch screen and moving around, I would recommend it for shooting videos and also you can’t hold your hands steadily with the Xoom.

One thing I noted about the camera is that it adds a little saturation to the picture (when outdoors); it makes the pictures look nice and beautiful but little altered and not very natural.

Close-up shots were much better than I expected from a camera on a tablet.

Here are a few sample pictures taken from Motorola Xoom itself. Note that the outdoor pictures were taken in medium light/cloudy environment. The close-ups were also without proper lighting. Exif Data and Location information has not been altered. 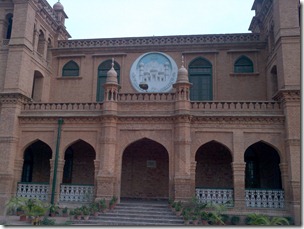 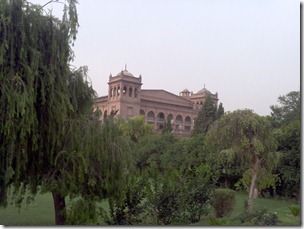 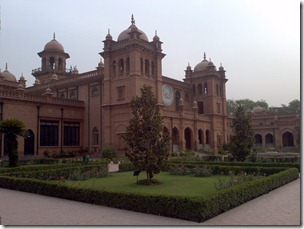 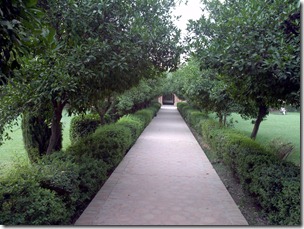 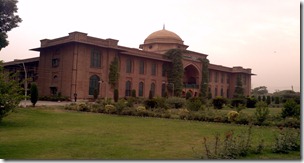 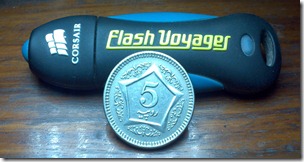 The two stereo speakers are on the back. The sound quality is very good but audio is not very loud. No/low noise environments are fine but in busy environments you’ll have to turn the volume to full to be able to listen properly.

Turn on the Xoom, connect to a WiFi network and within minutes you’ll get a notification that a system update is available. Five minutes later you are on Honeycomb 3.1, no need to connect it to your system for updates and this is a big plus.

Now Honeycomb is different than its smartphone siblings. The best aspect of the software is the notification system. If there’s a message, you don’t have to close the app go the main screen/app screen and see what has happened, you can just glance at the lower right corner of the screen.

A pop-up displays the message and disappears afterwards, quite convenient compared to others. Android 3.1 gives you the ability to resize widgets & an unlimited number of App restores, fixes bugs in auto-brightness etc. etc. 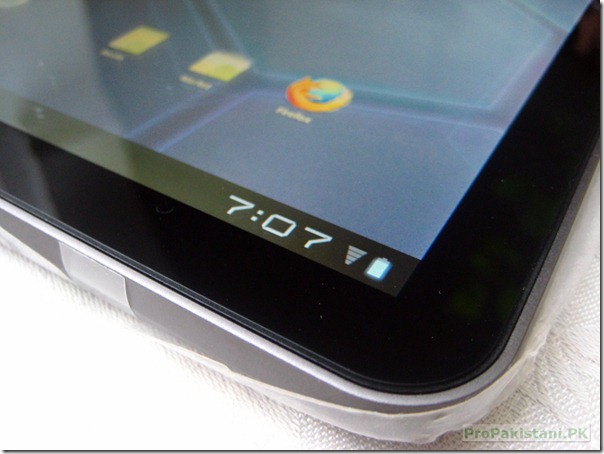 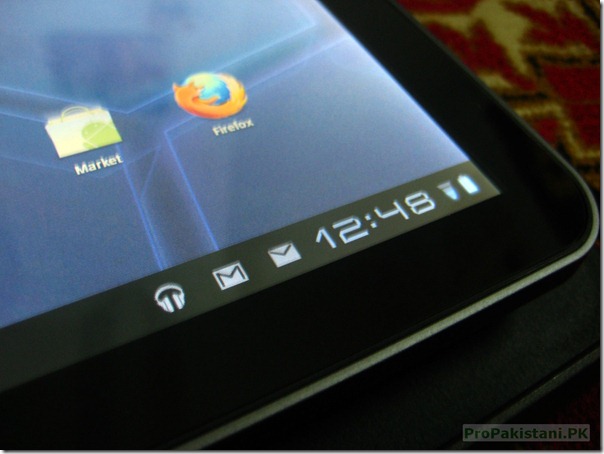 The three virtual buttons are on the lower left corner, one for back, one for minimizing the app and the third for the multitasking menu/recently used apps.

There’s one more at the upper right corner and that changes its functionality according to the app you are in. In short it gives you access to the in-app menu/settings. The transition and other animations are beautiful & smooth. 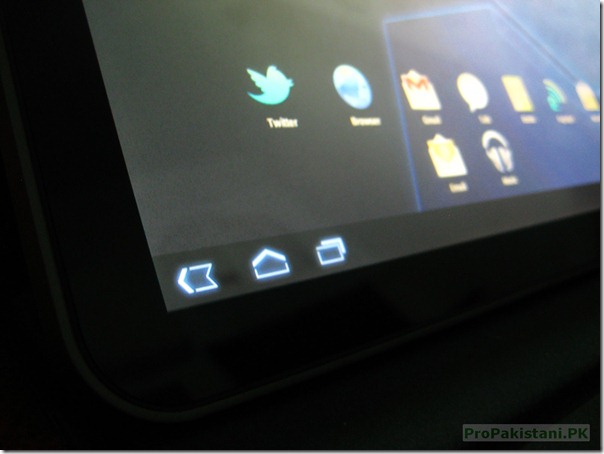 The tablet specific software are a joy to use. They take advantage of the large screen and divide information into panes. Gmail is at its best with the inbuilt app. Both the Gmail and the built-in Email client give you push notifications.

Youtube’s theatre like experience is great on the Xoom. Music player is a strong upgrade compared to the previous versions with a nice new interface though a little buggy.

The browser is the Xoom’s strong point. You get a webkit browser with tabbed browsing, chrome sync and complete desktop like performance. A slight glitch is that some sites mark it is as a mobile browser, in that case you will have to scroll down and select the desktop view.

If you are going to read lengthy articles turn to the portrait mode. Non-tablet specific apps are just large versions of their smartphone counterpart e.g. the Twitter client & unfortunately there are very few tablet specific apps.

Anyways, the OS itself caters to most of the user’s needs (browsing, emails, entertainment) so you’ll not need any extra apps unless you have some specific requirements which unfortunately everyone has.

This new interface and button layout requires some getting used to. The ease of ‘turn on and use’ works with the browser and media player but for others a little learning is required. Once you know which button does what you can navigate through pretty much every app easily.

Quite a lot of praising lately, so what are the glitches? Is there any shortcoming that can degrade your tablet experience? The answer is, Yes & and quite an un-suspecting one, Flash support.

Honeycomb supports flash, version 10.3 is available in the market but you can’t download it in Pakistan, bummer.

That’s not it; Google Books, Amazon Kindle App and Barnes & Noble Nook app are not available in Pakistan too. No great ebook reading experience is a disappointment.

Google if you are reading this bring these two back and remove the country wise restrictions from the Market. I did manage to install flash player somehow but that’s not how it should be.

In last 10 days since I got the Xoom, frankly speaking I have turned on my Laptop only 4-5 times, that too for writing this article, some simulation & moving content to the tablet. If you are in the market for a tablet, buy the Xoom. Apps is not a big issue, trust me on that.

P.S. will the Xoom eat the Apple? No, not until it sharpens its teeth a little more ;) 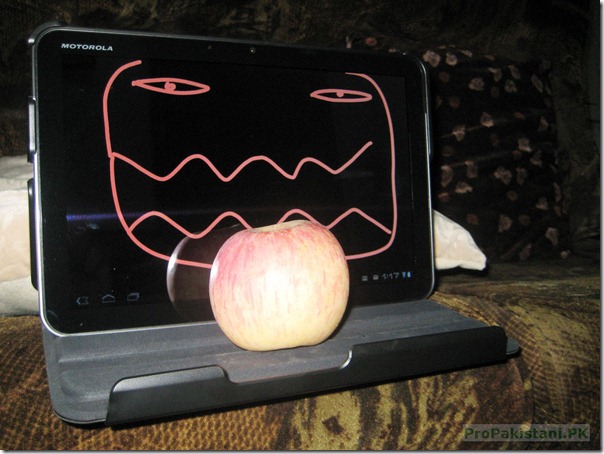