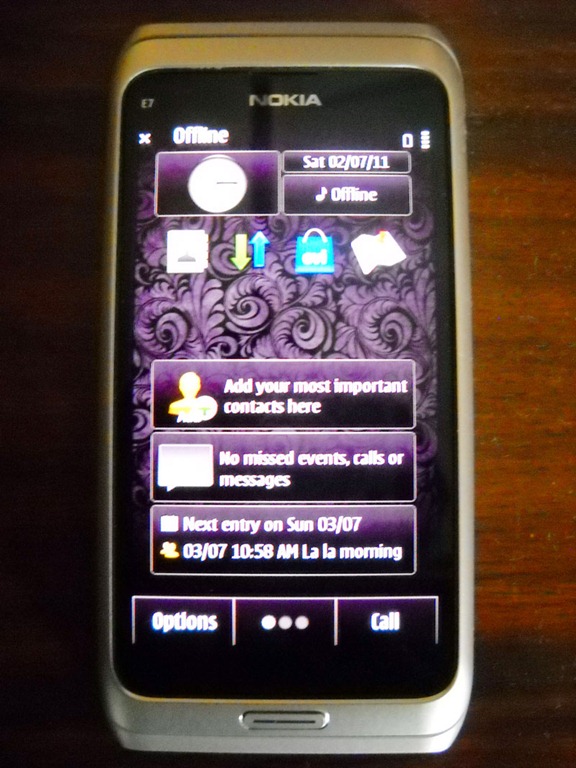 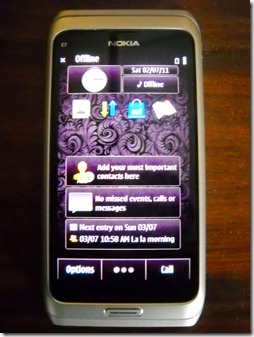 Recently ProPakistani got its hands on the Nokia E7. Traditionally Nokia has geared the E series towards the business class but the E7 aims to do away with that and is designed in a way that it has a consumer feel to it too. So without further ado, let’s get started:

The Nokia E7 is very similar to the Nokia N8. In fact it looks like its big brother. The build quality of the E7 is exceptional. It’s made from the same anodized aluminum the N8 is made of and it feels great in the hand. However the battery isn’t replaceable – so hard luck if your phone dies on you.

The left side of the Nokia E7 sports the lock/unlock slider key. The top houses mini-USB slot, a mini-HDMI slot, the power button and a 3.5mm audio jack, which can also be used for TV output at standard resolution.

The E7 has a great feature called USB on-the-go which allows you to plug a USB and it’ll automatically start the file manager through which you can access files on the USB. The mini-HDMI slot is a great treat and outputs video in 720p.

There is a SIM card slot which contains a SIM tray (which is a bit fragile and I was praying that I don’t break it whenever I was handling it), the camera capture key as well as a slider which doubles up to zoom in/out and volume up/down on the right side.

On the back it has the speaker at the bottom, a microphone which helps in noise cancelling during calls and the 8 megapixel camera with dual LED flash. The front side has a single menu button, which is a welcome change since the menu key on the N8 was extremely annoying because it wasn’t centered.

Nokia E7 has a light sensor (which changes screen brightness according to lighting conditions) as well as a VGA camera on the front for video calls. But the defining feature of the E7 is revealed when you slide the phone to reveal a full QWERTY keyboard. The keys are well spaced and are wonderful to type on. The spacebar is perfectly centered and this keyboard is one of the best I’ve seen on any device. I should mention here that the build quality is so good that you don’t even realize that the phone splits in the middle. 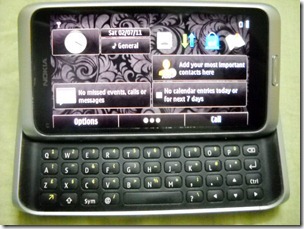 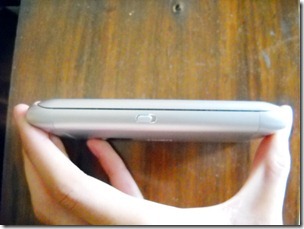 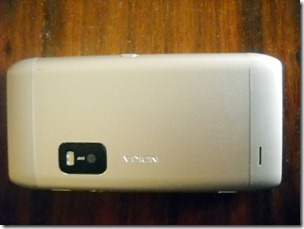 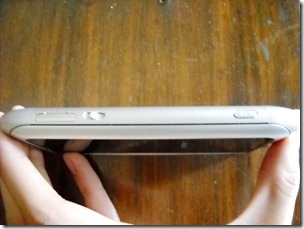 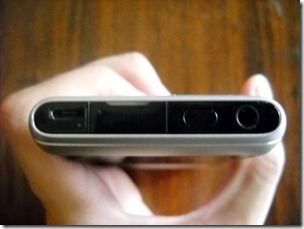 The E7 disappoints when it comes to internal hardware. The processor (680MHz + GPU) , while being adequate for the E7, is not up to par especially when you consider that dual core processors are being offered by the competition now.

It has 16GB in built memory but there’s no memory card slot, also a let down.

The phone has a gorgeous 4’’ AMOLED display and it has what Nokia calls Clear Black technology. What it promises is better readability in sunlight, better colors and clearer blacks.

And boy, does it deliver. Legibility in sunlight is great, the colors look just as rich as they do indoors. Though there are reflections so you have to adjust the viewing angle a bit.

The best part of the display is the level of blacks. Black is truly black and you really have to see it to appreciate how good it is. Hands down one of the best displays Nokia has made in my opinion and its better than the Super AMOLED display on the Galaxy S II. That being said, the resolution is a bit low at 360×640.

The Nokia E7 runs Symbian OS^3. Nokia has worked hard on Symbian^3 but the fact is it still has a long way to go to compete with the likes of Android and iOS. 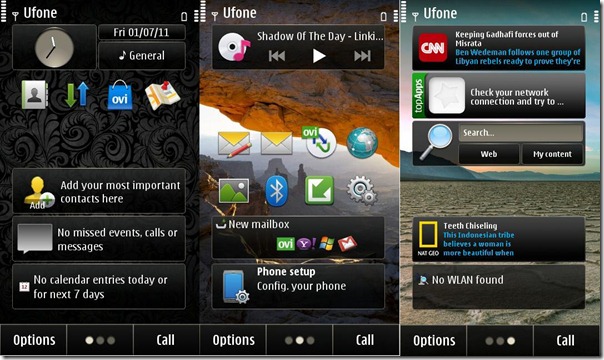 There are three home-screens which you can populate with different widgets; there is a slight lag when switching between home-screens though which is due to the fact that it waits for the swipe motion to complete rather than move along with the finger which would be more natural.

The phone comes pre-loaded with different widgets and once you set them up, you’d hardly need to go into the menu. The OS itself is user friendly, neat and has a low learning curve. 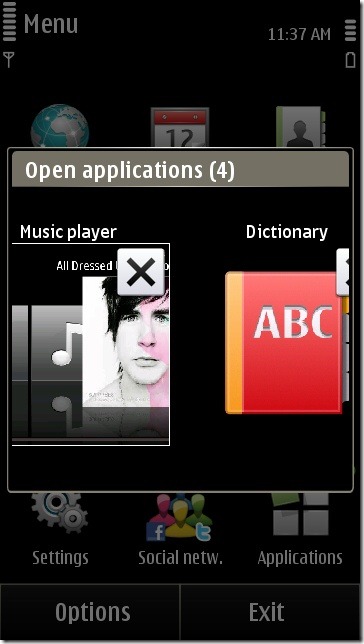 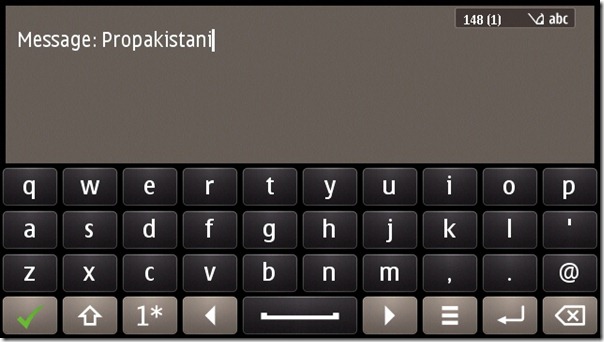 Texting on the phone is an awesome experience because of the hardware keyboard – but I’m pleased to report that the onscreen keyboard works very well too. Recently, Nokia has incorporated the threaded view of messages similar to the iPhone in which the conversation between you and your contact appears in text bubbles in one window and it’s a nice touch.

The phonebook is feature packed and doesn’t lack in any department. The web browser isn’t very good though. After using it for a while I grew frustrated and ended up installing Opera instead, which works much better.

Ovi maps don’t include Pakistan so that’s a let down. But Google maps work great so I guess no harm done. 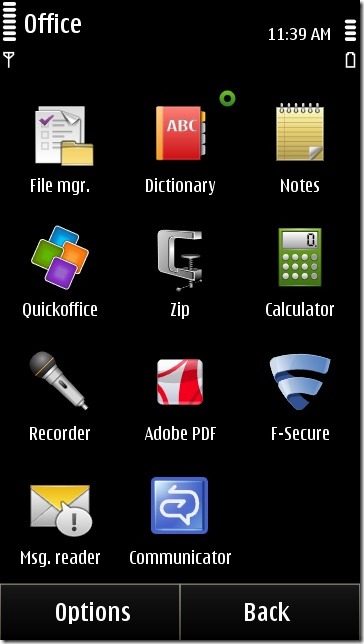 You get QuickOffice and Adobe PDF with the phone and the phone can read/edit Word, Excel, PDF and PowerPoint documents with no issues. The Ovi store provides the usual selection of apps and is adequate.

Setting up email accounts is also no fuss at all and one tap is all it takes to sign into all your social networks.

Another interesting feature is that messages can be read aloud by a robotic sounding voice. But the best part is that when future updates to Symbian will be released, E7 will get those updates. The E7 might be a bit slow but Symbian isn’t very resource hungry so you’d be all set. 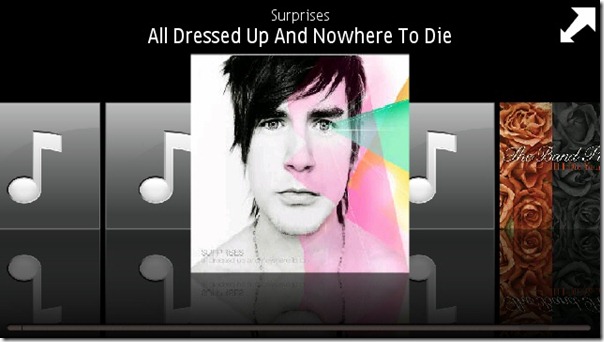 Despite being billed as a communicator device, the E7 is a media-rich phone. The supported audio formats are MP3/WAV/eAAC+/WMA. The music player is well equipped.

There is an iPhone styled album cover view mode. Making playlists is easy and sound quality on the provided headphone as well as on the speakers is very good and loud. An FM player is included.

The video formats the E7 supports are MP4/H.264/H.263/WMV. Watching videos on the phone is a sheer pleasure. The big screen, bright colors and the contrast on the phone is great which makes the viewing experience great. As for the photo and video viewer, they do what they’re supposed to do well enough.

The E7 has an 8MP camera which is capable of shooting 720p video at 25 fps. The camera results are great and the camera itself has features like smile detection, different scene modes etc.

Everything works great until you try to take close up shots. They end up blurry and out of focus. The E7 is a thin device and the reason is that Nokia decided to ditch the autofocus unit.

It has EDoF (extended depth of field), which means that everything up to 60cm is clear. Anything closer than that is not. No matter what arguments Nokia gives for this, it is not acceptable. EDoF, does however help when you’re shooting video.

It continuously keeps everything in focus. Even if you zoom in the video, very little quality is lost. Audio is recorded in stereo and sounds great. So the camera is a bit of a mixed bag.

The E7 has a brilliant display, awesome hardware keyboard and great connectivity options. But it suffers from slow software and a lack of autofocus on the camera.

Would I recommend the E7? For the business class people, yes. For the other consumers, I’d say a hesitant no. The hardware is brilliant but it’s let down by outdated specs and a potentially dying OS.