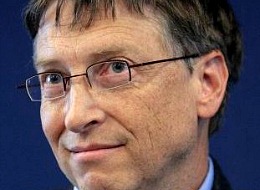 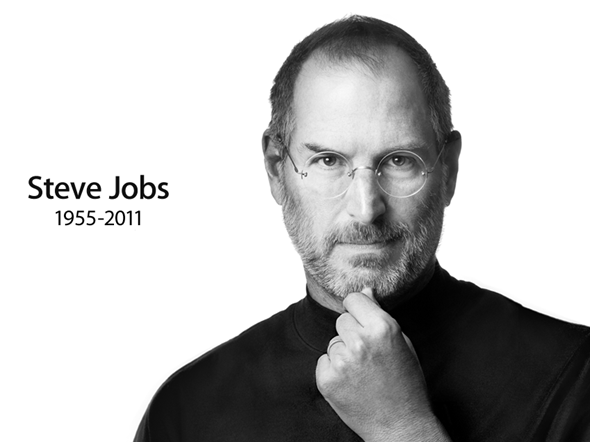 A person who was amongst the top influencers of our age is no more with us. The world is sad today; tech giants, celebrities, political tops are paying tribute to the person who changed the lives of billions. 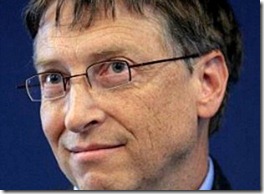 “I’m truly saddened to learn of Steve Jobs’ death. Melinda and I extend our sincere condolences to his family and friends, and to everyone Steve has touched through his work.

Steve and I first met nearly 30 years ago, and have been colleagues, competitors and friends over the course of more than half our lives.

The world rarely sees someone who has had the profound impact Steve has had, the effects of which will be felt for many generations to come.

For those of us lucky enough to get to work with him, it’s been an insanely great honor. I will miss Steve immensely.”

“Michelle and I are saddened to learn of the passing of Steve Jobs. Steve was among the greatest of American innovators – brave enough to think 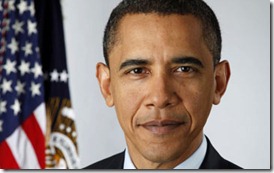 differently, bold enough to believe he could change the world, and talented enough to do it.

By building one of the planet’s most successful companies from his garage, he exemplified the spirit of American ingenuity. By making computers personal and putting the internet in our pockets, he made the information revolution not only accessible, but intuitive and fun.

And by turning his talents to storytelling, he has brought joy to millions of children and grownups alike. Steve was fond of saying that he lived every day like it was his last. Because he did, he transformed our lives, redefined entire industries, and achieved one of the rarest feats in human history: he changed the way each of us sees the world.

The world has lost a visionary. And there may be no greater tribute to Steve’s success than the fact that much of the world learned of his passing on a device he invented. Michelle and I send our thoughts and prayers to Steve’s wife Laurene, his family, and all those who loved him.”

“From the earliest days of Google, whenever Larry and I sought inspiration for vision and leadership, we needed to look no farther than Cupertino. Steve, your passion for excellence is felt by anyone who has ever touched an Apple product (including the macbook I am writing this on right now). And I have witnessed it in person the few times we have met.

On behalf of all of us at Google and more broadly in technology, you will be missed very much. My condolences to family, friends, and colleagues at Apple.”

“I am very, very sad to hear the news about Steve. He was a great man with incredible achievements and amazing brilliance. He always seemed to be able to say in very few words what you actually should have been thinking before you thought it. His focus on the user experience above all else has always been an inspiration to me. He was very kind to reach out to me as I became CEO of Google and spend time offering his advice and knowledge even though he was not at all well. My thoughts and Google’s are with his family and the whole Apple family.”

“Steve, thank you for being a mentor and a friend. Thanks for showing that what you build can change the world. I will miss you.”

“Steve was a teacher to anyone paying attention, and today is a very sad day for everyone who cares about innovation and high standards.”

“The digital age has lost its leading light, but Steve’s innovation and creativity will inspire dreamers and thinkers for generations.”

“Steve was an iconic inventor, visionary, and entrepreneur, and we had the privilege to know him as partner and friend.”

“True genius is measured by the ability to touch every person on the planet. Steve did that, not just once, but many, many times over his amazing life.”

“Steve was such an original, with a thoroughly creative, imaginative mind that defined an era. Despite all he accomplished, it feels like he was just getting started.”

“Steve was truly a genius of our time, a man with a rare ability to fuse art and technology. In centuries from now, he will be remembered alongside Leonardo da Vinci.”

“The PC era is officially over. #RIP #STEVEJOBS

“Today the world lost a visionary leader, the technology industry lost an iconic legend and I lost a friend and fellow founder. The legacy of Steve Jobs will be remembered for generations to come.”

“The world is a better place because of Steve, and the stories our company tells have been made richer by the products he created.”

“Once in a rare while, somebody comes along who doesn’t just raise the bar, they create an entirely new standard of measurement. #RIPSteveJobs”

“Steve Jobs was a visionary and a wonderful friend of The New York Times. He pushed the boundaries of how all providers of news and information interact with our users.” 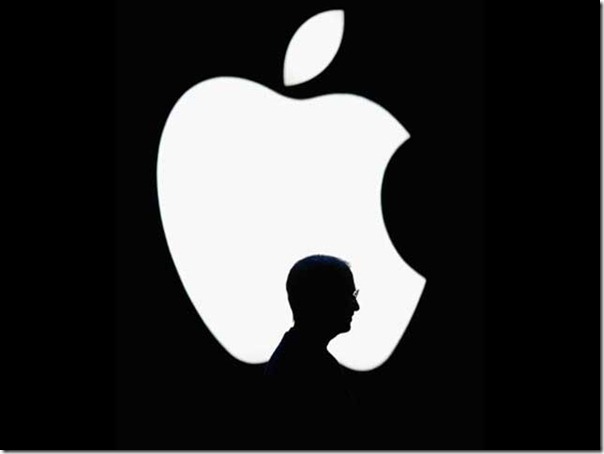 Co-founder of Apple, Steve Jobs was remembered at Apple as a “visionary and creative genius, dear friend and inspiring mentor.” He remained on the Board of Directors after he resigned as Apple CEO a few months ago. 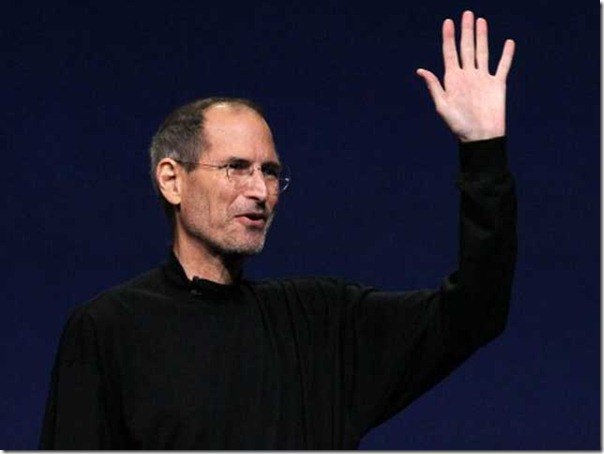 One of Jobs’ last public appearance at an Apple Special event to unveil the new iPad 2 on March 2, 2011 in San Francisco, California. 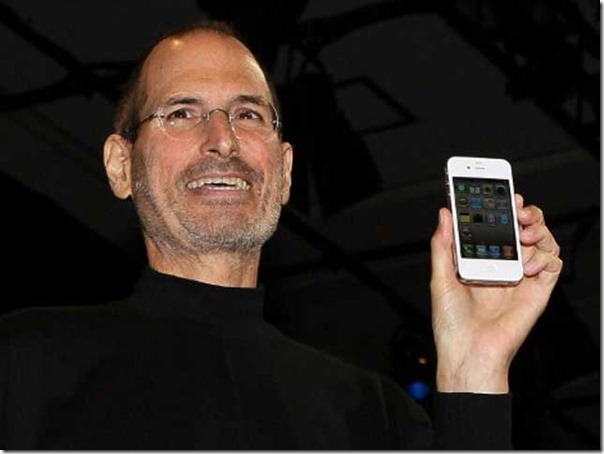 One of Jobs’ last contributions – the iPhone 4 which he showed off at the 2010 Apple World Wide Developers conference on June 7, 2010 in San Francisco, California. 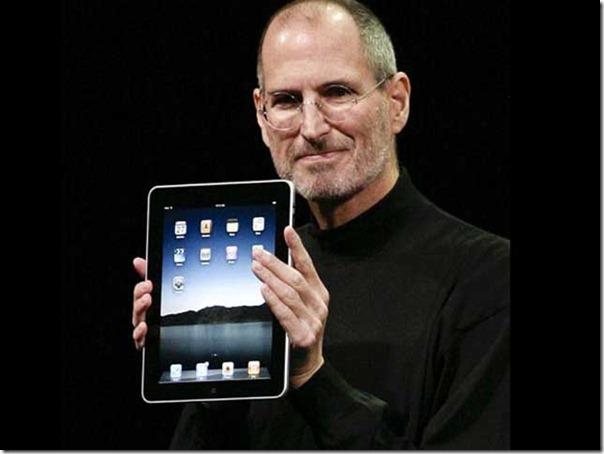 Steve Jobs back after medical leave, appears in January 2010, with the new iPad which has become the most desired object by technophiles ahead of the cellphone and laptop. 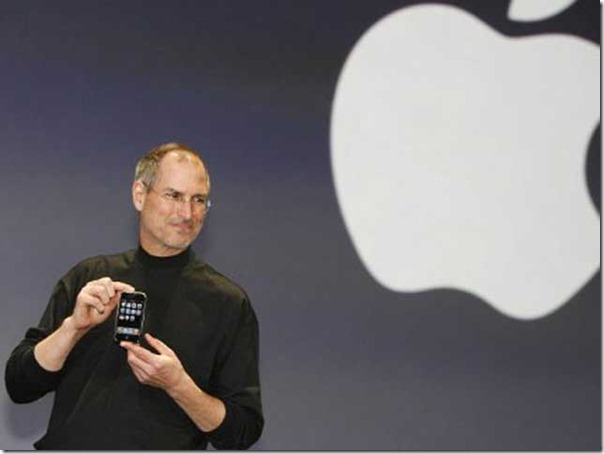 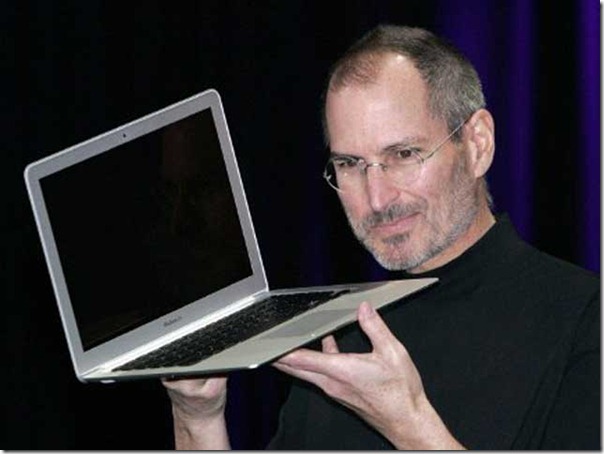 In 2008, Jobs is all smiles as he holds up the new Mac Book Air after his speech to kick off 2008 Macworld. He took a medical leave of absence the following year. 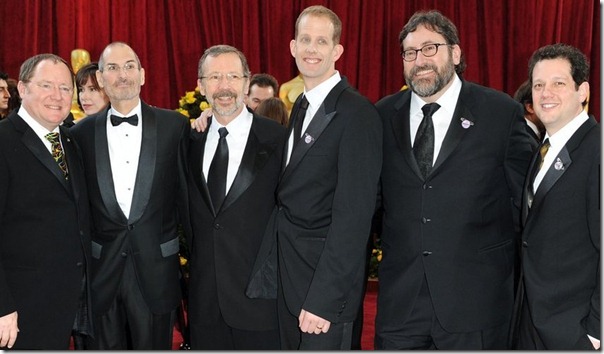 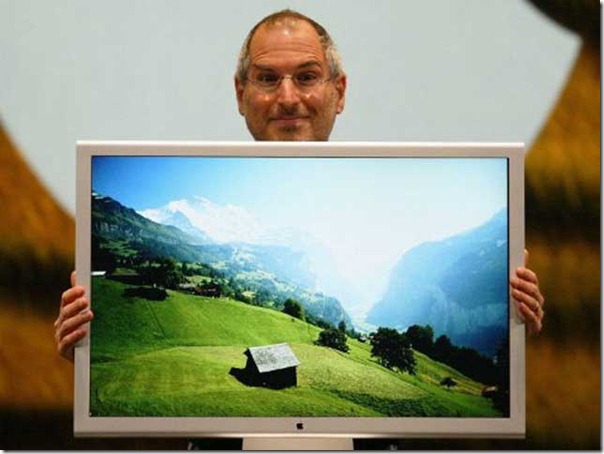 Steve Jobs in June 2004, announces the release of OSX Tiger and a new line of flat panel cinema displays including the first 30-inch model designed for the personal computer. 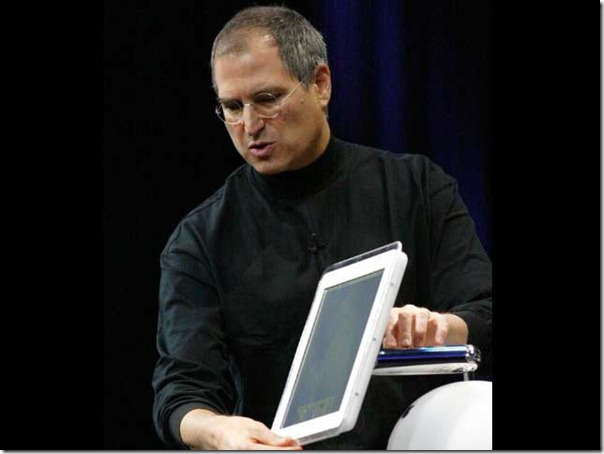 At the 2022 MacWorld Expo, Jobs introduces the all-new, flat-panel iMac computer which is now an icon for Pixar Pictures acquired in 1986 by Apple before Disney bought it in 2006. 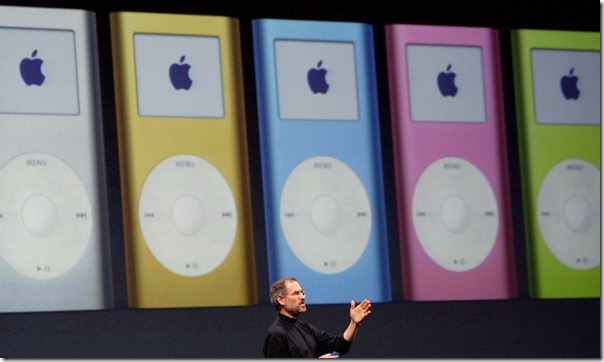 Apple expanded its best-selling iPod series with a nano and video version. The product revolutionized how people listened to and bought music. 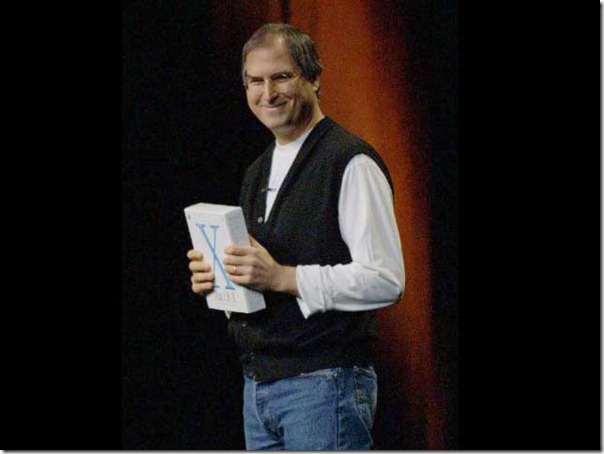 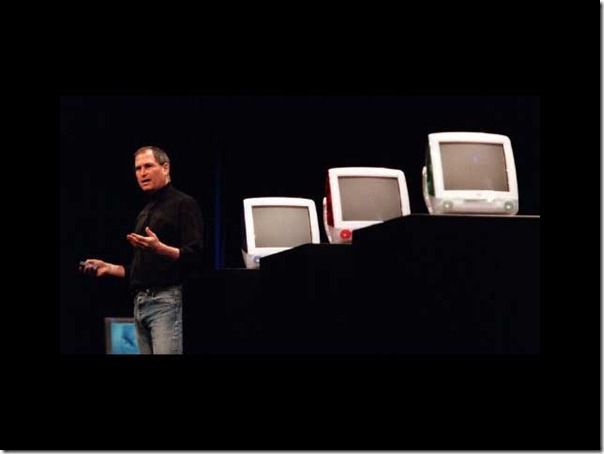 In 2000, Apple Computer sees the iMac unveiled at the Macworld Conference in July as well as the G4 cube, new dual-processor G4s, a new mouse, new keyboard and new software. 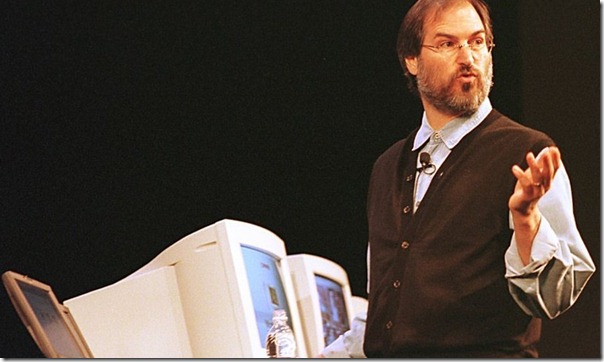 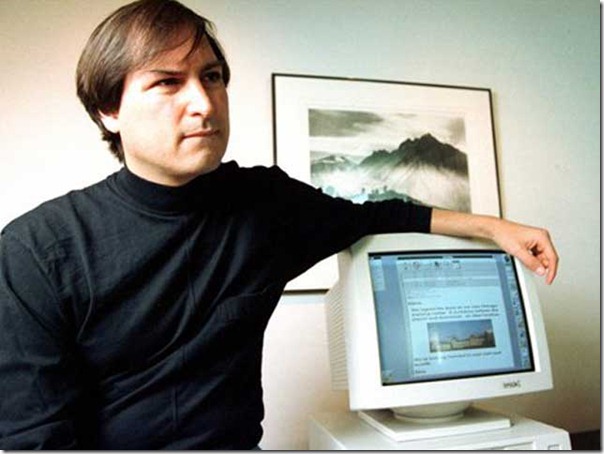 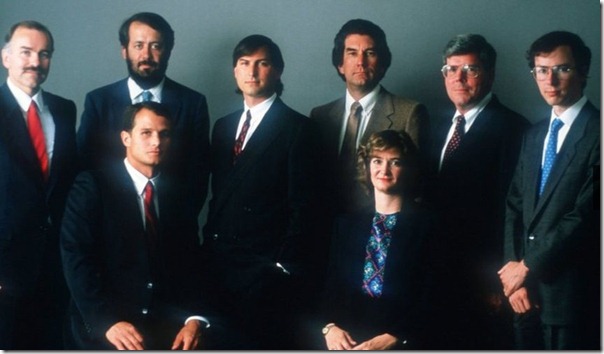 In 1986, Jobs founded a new company called NeXT. Its first computer went on sale three years later for $6,500 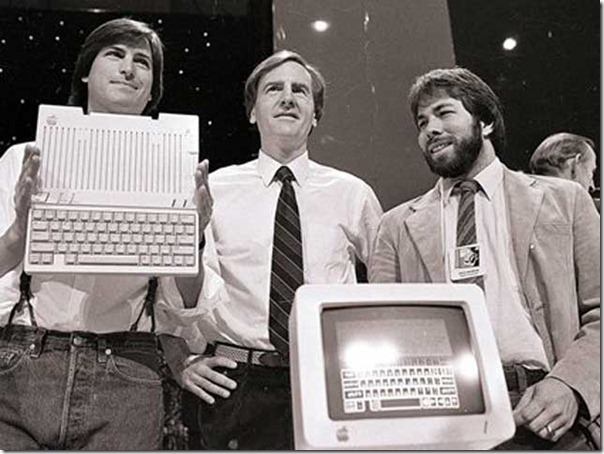 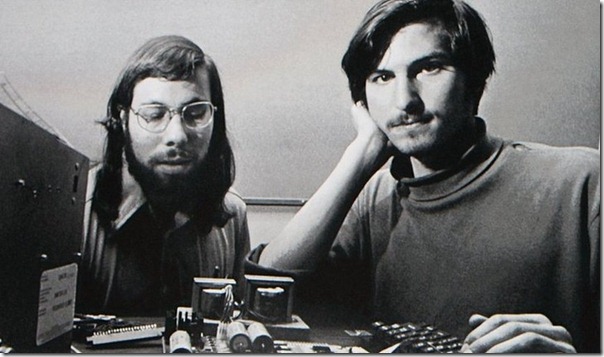 Steve Jobs and Steve Wozniak first began Apple in a Silicon Valley garage. Steve Jobs sold his VW van to help finance the venture. Their first computer went on sale in 1976 for $666.66. 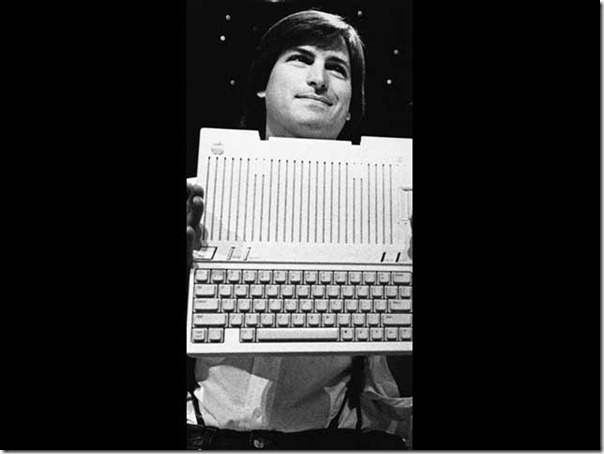 In 1976 Steve Jobs and Steve Wozniak unveiled the first Apple computer in Palo Alto, California. It consists of little more than a circuit board and costs just under 0. A year later The Apple II with a one-megahertz processor becomes the first mass prod 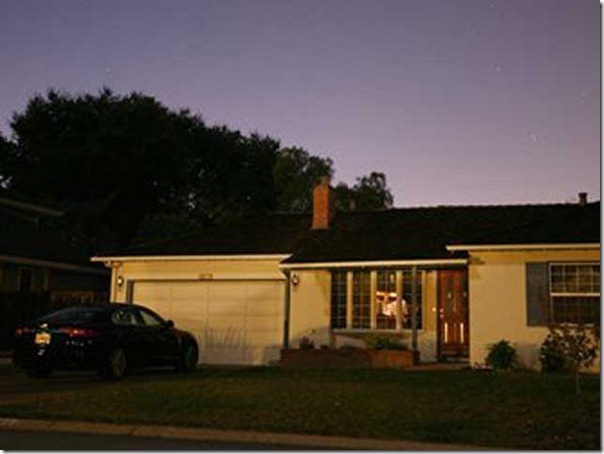 The home and garage where Steve Jobs and his partner Steve Wozniak founded Apple Computer in Los Altos, California 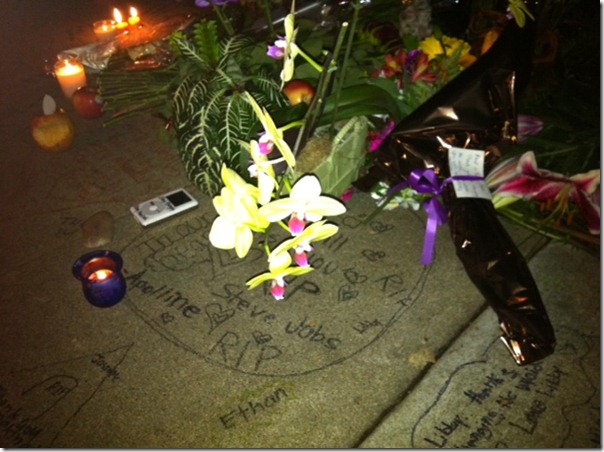 Via BBC, Reuters and others