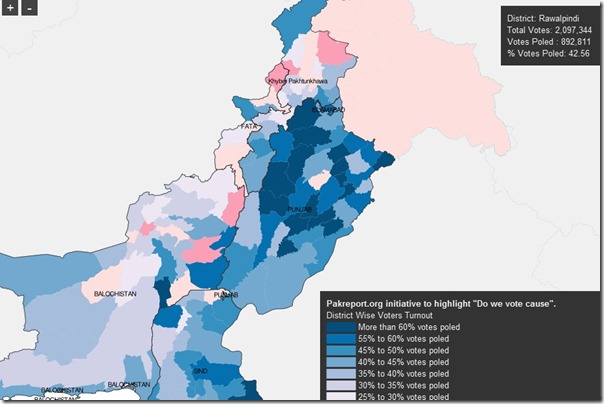 You might have a vague idea of the voters turnout in previous elections. There are more chances that you never knew the exact figures, didn’t know where to find such stats or never had those stats in presentable manner.

Folks at Cogilent have compiled all the data (obtained Election Commission) about voters turnout in past elections and put it together in an interactive map that tells the whole story in just few clicks.

Idea behind this application is simply great as they have come up with this easy to comprehend way of pointing out the low turnouts in previous election to eventually encourage people to cast their votes in 2013.

They have already compiled the data for 2008 elections, while planning to add more data in coming days. You simply need to head to this URL: http://www.pakreport.org/dowevote

You can zoom the map to the district level to see how many of us take part in the electoral process from each part of Pakistan.

The map shows the parts of the country where voters turnout ranges from 12.8% (Bajur Agency) to 67.33% (Bhakkar) percent.