Pakistan Telecommunication Authority (PTA) has issued information memorandum for the auction of three 3G and one cellular license for 1900/2100 MHz (3G/4G/LTE) band and 800 MHz Band.

Base price for 3G license would be $ 210 million for duration of 15 years, while the auction will be held in multiple rounds through open outcry method.

Base price for Mobile Cellular (defunct) License is set at $155 million for duration of around 8 years.

Spectrum for Mobile Cellular (3G/4G/LTE etc.) licenses has been made available in blocks of 9.8 MHz given below. The winner of auction will have choice to select any block of 9.8+9.8 MHz from the available spectrum in 1900/2100 MHz:

Operator(s) can start their services by 2013 after completing all mandatory legal and financial requirements. 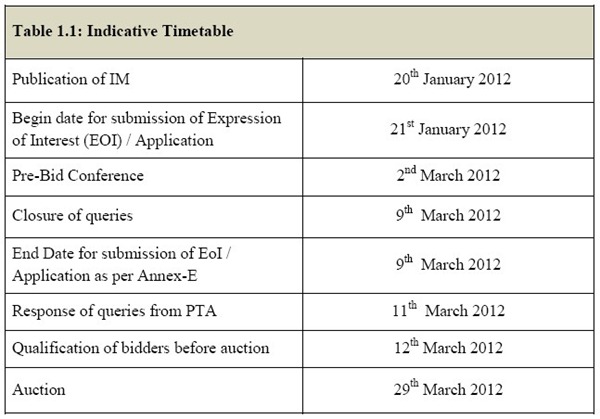 PTA will award one technology-neutral nationwide license to Cellular Mobile Operators (CMOs) and including existing and new players, which was earlier held by Instaphone before termination of its services and operation.

The operator may start its services in 2012 after meeting all financial, network rolls out and operational requirements. 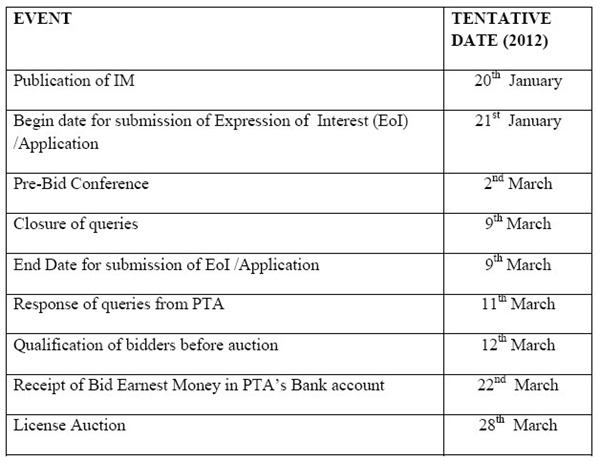 PTA in its Memorandum of Information (IM) 2012 stated that the Bidding Committee will be announced prior to start of the auction and shall continue the auction until there are no further bids. The time duration between two bids shall be five minutes. Each bidder shall be granted a timeout of fifteen minutes each, on request, only twice during the entire auction process.

Each successive bid(s) shall have to be more than the already quoted bid. Therefore, the subsequent bid increment shall be in multiple of $2 million with a minimum bid limit of 2 million and maximum bid limit of $10 million.

The successful bidder shall deposit 50 percent of the auction winning price, that is, Initial License/Spectrum fee after adjustment of the bid earnest money within thirty (30) working days in PTA designated bank account.

If no bidder is found ready to match the auction winning price, the Bidding session will be closed without awarding any license, PTA stated.

PTA shall forfeit the bid earnest money and all other amounts received from the defaulting bidders.

The defunct license shall only be issued after payment of first 50 percent of the initial spectrum fee within thirty (30) working days from the auction date. Whereas the new license shall only be awarded after payment of 100 percent of the auction winning price within sixty (60) working days from the date it is offered to the bidder.

PTA reserves the right, on the recommendation of the Bidding Committee, to disqualify any bidder and forfeit its money for different reasons such as failure of payment, misrepresentation and inaccuracy of facts in applications and corrupt practice, meaning the offering, giving, receiving or soliciting of anything of value to influence a public official in relation to auction process.

You can download Information Memorandum for licenses from following links