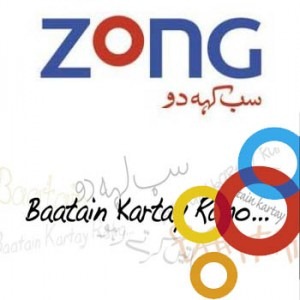 Zong’s ‘Sab Keh Do Day’ previously scheduled for Sunday, April 22, 2012 has been postponed as a mark of respect for the unfortunate victims of yesterday’s tragic plane crash in Islamabad.

“In light of this heart-rending disaster that has shaken the whole country, we have decided to postpone the ‘Sab Keh Do Day’ as an expression of our solidarity with the families of those who have passed away”, stated Usman Ishaq, Director Marketing, ZONG.

“ZONG team members would like to extend their deepest condolences to the families of the 127 people who perished.”

Sab Keh Do Day is a day that celebrates the free flow of communication, thoughts, expressions and emotions. It’s a day that encourages people to step back from everyday issues and leave behind all their inhibitions to truly share what’s in their hearts and minds.

ZONG has been celebrating Sab Keh Do Day every year since 2009 when it was first organized to mark the anniversary of the brand. It is held in April every year, the same month that the brand was first launched in.