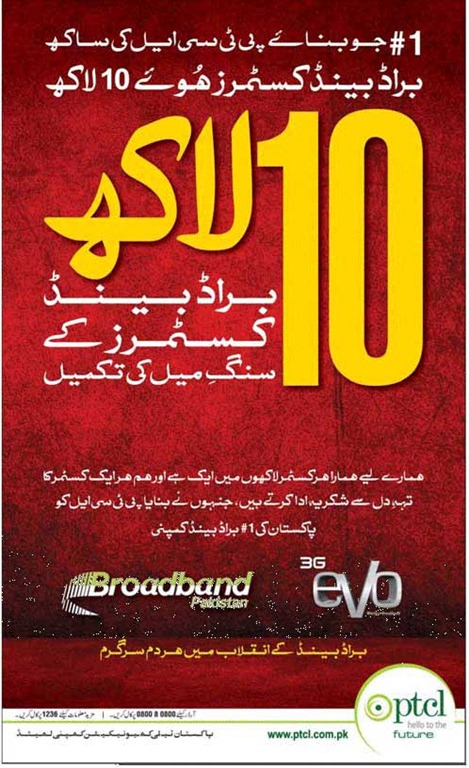 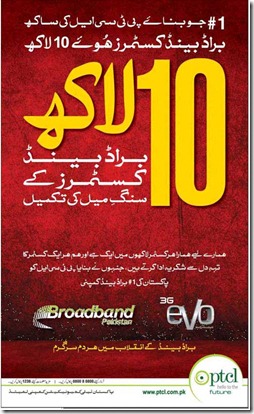 Pakistan Telecommunication Company Limited (PTCL) today announced that it has achieved one million broadband customers in the country, that is over or around 50 percent of broadband market share.

A messages by Mr. Walid Irshaid, President and CEO PTCL, published on its official website says:

With over 3 million fixed line users and 1 million Broadband customers in over 1000 cities, PTCL is reaching the country’s furthest areas where others have not.

We are fueling the Broadband revolution in Pakistan with our EVO 3G Wireless Broadband offering true mobility and fastest wireless Internet within the reach of every citizen of Pakistan.

PTCL claims that its DSL broadband services are offered in 1,000 cities countrywide while company’s wireless broadband service namely EVO is stretched to over 180 cities and Nitro in 70 cities.

PTCL has been aggressively pushing its DSL and EVO/Nitro since it started offering DSL broadband services in 2007 and EVO in 2009.

With declining number of landline users, PTCL is now heavily relying on broadband customers for its revenues, which allow the company to attain better margins thanks to higher ARPU.

According to recently reported PTA stats, Pakistan had 1.9 million broadband customers till February 2012.