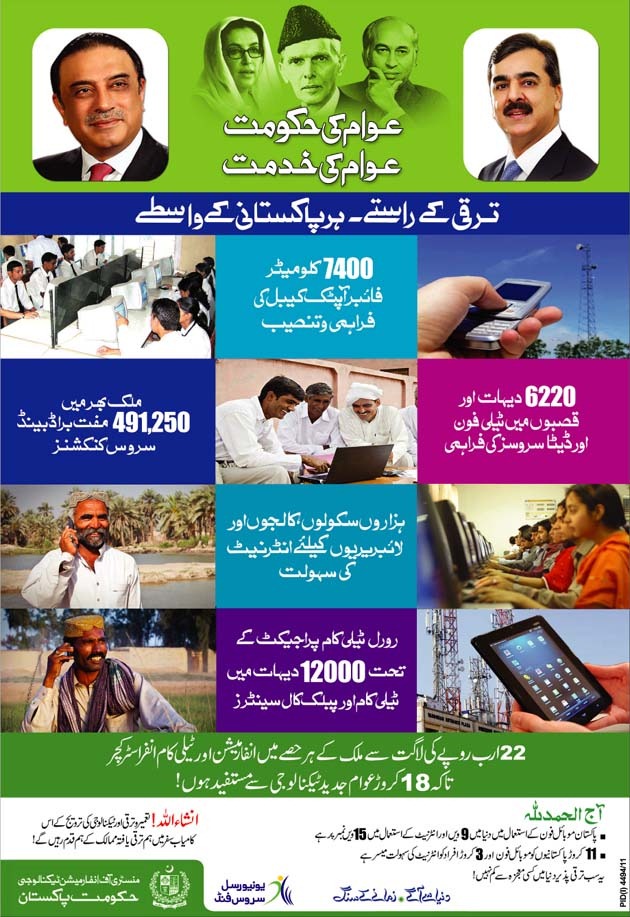 First thing first. Let’s have a look at the print ad that I am going to talk about. (Clicking on ad will open the image in new window in full size) 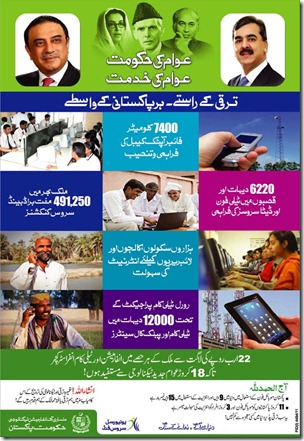 A little background of the advert: this Print ad is by Universal Service Fund, published last month in various national newspapers and magazines. Though there is a scandal already propagating out of this media campaign by USF as reports are claiming that the money spent on this advert (valuing PKR 120 million) was not authorized by the company’s board. (You can read more details on it here).

I am not going to discuss the alleged embezzlement under the head of marketing spend, rather I will stick to the basics.

USF has every right to advertise its achievements, reports or anything they want to. They are private limited company (by virtue – though its non-profit organization and can’t use “private limited” word as per section 42 of Companies Ordinance 1984).

So the stats or content in above ad are absolutely valid to be advertised and there is nothing questionable about it.

The only thing which irked me were the pictures of political personalities from one political party, i.e. PPPP (except of Qaid-e-Azam Muhammad Ali Jinnah).

Why would a private limited company (by virtue, as mentioned above) will publish pictures of political leaders. While this company has nothing to do with the government – for policy making, decisions, audit, funding, spending or for anything else.

Thinking broadly, one may term that USF wanted to share the proud moments with the leadership of the country. But a critical view may call it an in-direct support by a non-profit organization for a specific political party, which is not allowed by Election Commission of Pakistan.

For the records, here is what ECP states:

Any contribution made, directly or indirectly, by any foreign government, multi-national or domestically incorporated public or private company, firm, trade or professional association shall be prohibited and the parties may accept contributions and donations only from individuals.

I asked the same question from a senior official of SECP, who wanted not to be named, and he was satisfied that this advert can be challenged on legal grounds. Though he mentioned that publishing the pictures of political leaders in adverts is an accepted norm, but he had to agree with me that ECP disallows it.

SECP official confirmed me that USF was registered under section 42 of Companies Ordinance 1984 and it could not support/assist any political cause/party.

Just to mention, this is not the first time that Universal Service Fund published an advert with pictures of political leaders. This has happened before as well.

In a telephonic conversation USF’s spokesperson told me that board was probably not aware of this rule by ECP. However, she told me, board will be notified of this rule for evaluation.

Generally, it is perceived that USF comes under Government’s umbrella, for which they take the credit as well – that’s because telecom is probably the only sector that they can proud of  – but the fact remains that USF is non-profit organization, run by professionals who are paid from company’s private money.

Moreover, this money doesn’t come from government’s pocket, instead it is given by telecom operators for the development in un-served and under-served areas of the country.