Telenor Pakistan has posted its second quarter 2012 results today, demoing a growth in revenues by 18 percentage points in local currently that amounted to Rs. 23.015 billion during the reported quarter – up from Rs. 19 billion during the same period previous year.

Telenor group, in its quarterly earning report, said that contribution of financial services (Easypaisa) towards company’s revenues stood at 3.5 percent and valued Rs. 1.91 billion during three months till July 31st, 2012.

The EBITDA margin increased by 2 percentage points mainly driven by strong revenue growth, as well as improvement in gross margin from a larger proportion of on-net traffic. EBITDA in local currency increased by 26%.

Operating profit was negatively affected by Rs. 4.5 billion in accelerated depreciations related to the ongoing network modernization programme in addition to scrapping of Universal Service Fund investments in the Malakand region of Rs. 640 million and additional
depreciation due to a one-time reconstruction of fixed asset register this quarter.

Capital expenditure was low during the quarter awaiting the upcoming network modernization in addition to the reconstruction of the fixed asset register.

Company said that ARPU in local currency increased by 1%.

Telenor Pakistan reported that subscriptions increased by 615,000 during the quarter. At
the end of the quarter the subscription base was 12% higher than at the end of second quarter last year. 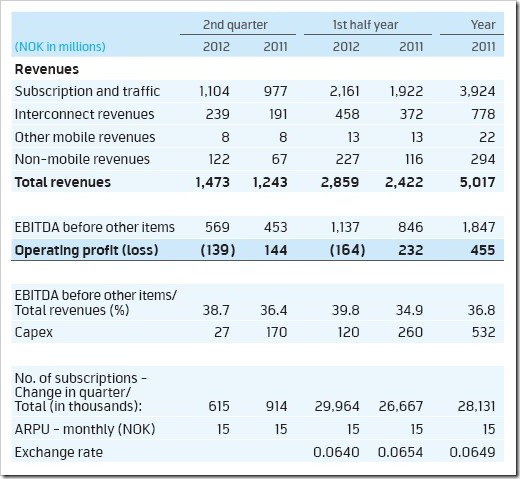