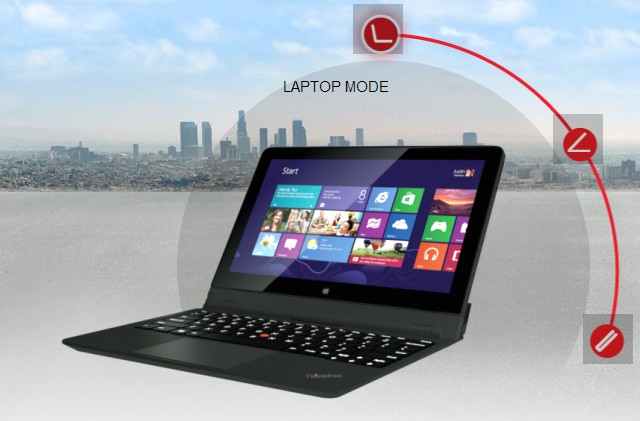 Lenovo was definitely among the busier PC companies in CES this year. They’ve launched a wide variety of products during the event, most of them being quite pleasing and the ThinkPad Helix too was certainly among its high points.

This PC is definitely among the most feature-packed PCs we’ve seen in CES 2013. A novel concept plus a combination of great hardware and software is what makes this PC great. The ThinkPad Helix is available with up to 3rd Intel Core i7 processor, 4 GB RAM and 256GB SSD storage. It can run a Windows 8 version up to 8 Pro.

The tablet and screen are the parts where the real action starts though. The screen is a 11.6 inch Full HD IPS display with a res. of 1920 x 1080 pixels. Its a multitouch touchscreen with Corning Gorilla Glass. Stylus input is supported too, infact there’s even a stylus compartment at the back of the tablet. This technology is built in co-operation with Wacom. The back also has a 5mp camera with LED Flash and 30fps video recording (there’s a 2mp camera on the front too). The tablet weighs 2 pounds alone and 3.8 with the dock. The battery life is quoted at 10 hours(dock and tablet combines, 5hours by each alone).

The tablet has got USB and Mini DisplayPort ports both on the tablet and the dock. 3G and Wifi connectivity options are there too alongwith 4G and NFC in some selected models/markets. The Keyboard is spill-resistant and it also features the traditional Lenovo trackball at the centre.

The ThinkPad Helix will retail at $1499 which is easily the reason which will prevent most people from buying this PC. It will be available in February this year. If you’ve got the bucks, then you should definitely check this tablet out if you are into Windows 8 game because it is a deal you’re very less likely to regret.

Below are some more pictures of the device: