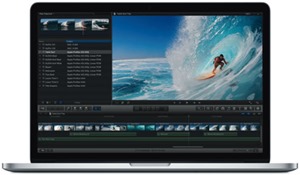 Apple, one of the biggest laptop makers in the world, has unexpectedly lowered the pricing of its MacBook line-up of laptops while at the same time boosting the specifications.

The decision was taken mainly because of the fact that MacBooks didn’t went off the shelves as well in the important holiday season as expected.

The top-of-the-line $2799 15 inch MacBook Pro with Retina display also comes with an upgraded 2.6Ghz quad-core Intel Core i7 processor now along with 16GB RAM, up from 8GB.

The 13 inch top-of-the-line MacBook air comes at $1399 now, down from $1499. Despite the lowering down of pricing, all of the MacBooks still cost a fortune with the base MacBook Air model coming at $999.

The Silicon Valley giant sold over 4.1 million laptops in the last quarter of 2012, down 21 percent from last year which is probably the reason why we have seen this unusual price drop from Apple.