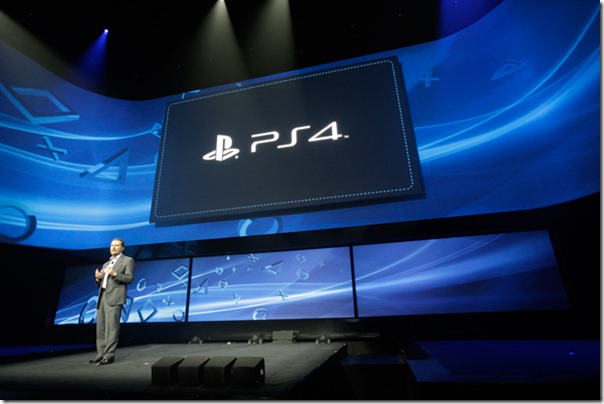 The wait is over. Its time to start gaming. After more than 6 years of the release of PS3, Sony has finally announced its fourth home and  eighth generation console. Apart from being a powerful console on its own right, the PlayStation 4 is also among the most social consoles of all time.

The much-awaited announcement in NYC also put light on the new DualShock controller among other things.

Perhaps the strangest part of the PS4 announcement was that Sony didn’t show the game console there. This means that despite the fact that the whole gaming world and the internet’s going gaga over it, we don’t know yet how the thing will look like.

So to start with, the PS4 has 8GB GDDR5 memory, 8-core AMD x86 “Jaguar CPU” and GPU with next generation AMD Radeon graphics (which can provide performance of upto 1.84 TFLOPS). There’s a built-in hard drive of course but with unknown size.

The new optical drive reads Blu-ray at 6x and DVDs at 8x.

The controller of the new PS4 is the DualShock 4, the successor to the amazing DualShock 3. As expected, the new controller brings additional functionality too. First of all its looks different and weighs more at 210g. It features a touchpad now (a technology which Sony has already incorporated in the PSVita before). There is a light bar which displays info like ‘health’ in games. A 3.5mm headphone jack, extension port and microUSB port can be found too.

Motion sensing is a huge feature of the controller. It features 3-axis gyroscope, 3-axis accelerometer and vibration. A mono speaker can be found too and the rechargeable controller is powered by a 1000 mAh battery.

A new share button has been placed at the front of the DualShock 4 and the start and select buttons of its predecessor have been merged into a single Option button.

Because of the move from the Cell Architecture to x86 in the new iteration, the PS4 won’t be able to play PS3 games so only the launch titles will be available at launch. The console, however, will be able to stream PS1, PS2, PSP and of course PS3 games over the internet in the future thanks to Gaikai, a cloud service which was recently bought by Sony but there’s sometime left in its release. PS4 games can also be streamed on the PSVita.

The games can be played while downloading and downloading can even take place when the console is switched off through the secondary processor of the system. Titles including Diablo, Final Fantasy, Infamous and Killzone are available at launch.

Applications other than games can be opened while playing games too. Sony is currently working on special apps which will make tablets and smartphones usable as secondary controllers. It has already been confirmed that used games can be played on the PlayStation 4.

The user interface of the PS4 is different from that of the PS3. There’s a new notification centre at the top and emphasis is placed on social features of the console in the UI. More details of the UI will be revealed soon but the interface seemingly consists of a lot of square boxes.

It’s already mentioned that the new DualShock comes with a dedicated share button. This button lets you share gameplay videos which are uploaded directly from the console to any website or the PlayStation Network. Games can be live streamed online and seeing other players play in real-time is possible too. Popular services like Amazon Instant Video and Netflix are already available.

The PlayStation Eye has seen a design change too. It now features two cameras, each with a resolution of 1280 x 800 pixels. They have a minimum focusing distance of 30cm, an 85-degree field of view and f/2.0 aperture. Four-channel microphone array is also here.

The PS4 will be facing competition from the current Nintendo console the Wii U and the upcoming Microsoft console which is said to be unveiled later this year. Given the abysmal sales of the Wii U, it can be said that the Nintendo console is a competitor to the PS4 unless Nintendo pulls of a magical trick quickly.

The Xbox 720 (or whatever the new Microsoft console would be called) might be a big competitor to the Sony console, especially if it features backward compatibility, something I believe would’ve given the PS4 a huge boost.

You might be thinking that what about PS3? Well, it isn’t going anywhere soon. Considering the fact that Sony kept the PS2 alive even after 6 years of the release of PS3, the PS3 too will most probably be kept ‘alive’ for some time. Its price might be lowered which will make it an even better console since its library and the list of its exclusives is pretty huge.

But right now, easily the biggest concern not only for Sony, but the gaming industry as a whole will be the rapid surge of the app market. The gaming market is already going downward and the app business is being blamed here and no one’s gonna disagree. The price of the apps, which is several times lesser than that of console games (and a lot of them are freemium apps too), coupled with their ever-increasing quality has really damaged the once extremely-lucrative gaming industry.

Sony has said that they haven’t decided the launch price of the console yet but it would be substantially less than the outrageous launch price of the PS3 which was launched for as high as $800 in some markets. It will be released in the fall of 2013 i.e. Q4.

Although I’m trying not to be a pessimist right now, I can’t really shrug off this feeling that the PS4 won’t be as successful as its predecessors and I’m talking about this in the long run. After all, 2013 is just so different than the year 2005 and 2000.