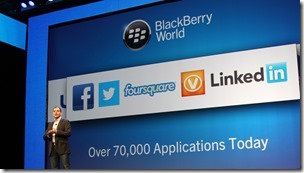 A great news for the fans of the BlackBerry 10 platform is that the number of apps in the BlackBerry store has just reached 100,000. Of course, numbers don’t tell the whole tale but still its quite an achievement for a store which came into existence just 7 weeks prior to reaching the milestone.

The news also came just a day before the Z10 smartphone hit the all-so-important US market.

The milestone was achieved sooner than any of the platform’s rivals including Windows Phone, which is currently being declared its biggest competitor. Unlike Microsoft’s platform though, it at least had 70,000 apps to its name prior to its release including the abysmal Android ones. Windows Phone app market still has an upper hand in terms of quality apps and at the end of the day, they are what matter most.

With apps increasing at such a fast pace, its easy to see that even developers thinking or at least hoping that BlackBerry will make a comeback and capture the market as it once did.

Martyn Mallick, Vice President of Global Alliances at Blackberry mentioned that the response to the BlackBerry 10 platform and applications has been outstanding. Customers are thrilled with the applications already available, and the catalog just keeps growing, now with more than 100,000 apps. Top brands and application providers are joining us every day and are seeing the benefits of being early supporters of the new platform.