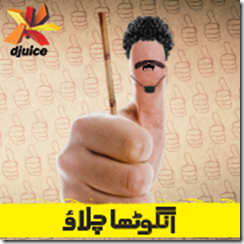 Telenor is currently airing Angootha Chalaoo TVC under the banner of djuice, company’s youth brand, to make the youth understand the importance of casting their vote in the upcoming election.

Campaign – that is capitalizing the on-going election spree – is getting mixed reviews with both positive and negative feedback coming from various circles.

Telenor believes that campaign is an effort to inject positivity and encouragement amongst the youth and is also trying to instill hope through the tag line jab angootha chaley ga, umeed phelaye ga.

Telenor claims that the idea is further stressed through phrases like Must Vote Karna and Election 2013 mein vote karney ka ehad karo.

However, there are people who are objecting Telenor’s approach by saying that this awareness campaign comes with commercial aspects because Telenor is selling election encyclopaedia, a service with which Telenor customers can get election related queries, information about election halqas and polling booths, breaking news, election themed ringtones & wall papers and more. Just to mention, this is an opt-in service and involves users’ freedom of choice.

Usage of slang words, such as “Chokri” has further irked the critics, who believe that they didn’t expect mainstream company like Telenor to portray such culture in its TVCs.

Critics say that Telenor’s act of promoting negativism on national TV channels is a long-running controversy attached with company. While recalling “Mohabbat ki Zuban” TVC by Mobilink, an advertising guru opined that there are positive of ways running an awareness campaigns too. Telenor must learn this quickly, he added.

Telenor supporters – on other hands –  say that company is subtly trying to make the youth understand that they can be the catalyst for change if they just exercise their right to vote;a dejected individual who believes Kuch nahi badlay ga is told that he’s not alone and that millions of youth are standing beside him for their rights, another individual who wants to find out who wins the elections is told Yeh jawab sirf tera vote de ga.

“The main idea of the campaign is to raise awareness about the importance of voting, encouraging the youth to vote and providing the necessary election related information. The need of the hour is to instill positivity and hope and sending the message out to the youth that it is through their individual contribution that we can determine our collective future, which is also exactly in line with djuice philosophy of Khamoshi ka Boycott”

Overall the campaign can be termed as positive a intent from Telenor, however, its execution went flawed.

Readers can share their thoughts on the campaign in below comments!

If you haven’t seen the TVC before, here it is: