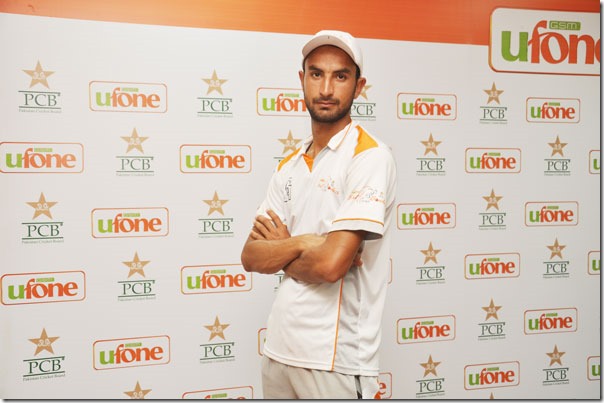 Ahmed Jamal from Abbottabad won the Ufone – ‘King of Speed’ of Rs.1 Million grand prize after clocking the highest speed of 143 km/h here on Monday on the final day at Ufone – PCB fast bowlers camp.

Other fast bowling contestants Muhammad Imran from Karachi marked the speed of 136 km/h, whereas, Abdul Ameer and, Faisal Yaseen from Faisalabad managed to bowl at the speed of 135 km/h.

The recent Ufone “King of Speed” trials held across the country managed to bring in more than four thousand fast bowlers, each wanting to find a place at the National Bowling camp and trying his best to win a prize of Rs.1 Million.

Ufone announced another chance for the lucky four, who had qualified for the national training camp to win the cash prize on last day of camp. The condition to reach or top 145km/h was set aside and any bowler who would clock the highest speed would be declared the winner.

Ahmed Jamal who stands 6 feet 4 inches and won the grand prize after proving himself the fastest bowler said, “I am pleased and excited after winning this grand prize and showcasing my talent to an expert like Wasim Akram. Under the supervision of Wasim Akram, I have learned a lot about different techniques used in fast bowling; this camp will help me a lot in the days to come.”

He said that his initial aim was to join the training camp to improve his bowling skills but since Ufone announced another chance to win the cash prize, he tried very hard to deliver the fastest speed to win the prize offered by Ufone.

Speaking on the occasion, Wasim Akram, former captain of the national cricket team and also the brand ambassador of fastest data cellular network, Ufone said, “I am happy to see that we still have great fast bowling talent in Pakistan, we just need to find that talent and polish our youngsters. Fast young bowlers like Ahmed Jamal are the future of this country; they can become part of our national team and take Pakistani cricket to new heights of glory.”

He said that Ufone and PCB had done a tremendous job by bringing together young emerging fast bowlers and providing them with an opportunity to showcase their talent. He also hoped that Ufone and PCB will continue to organize such healthy and useful events in the future and that would be a great service to Pakistani cricket.