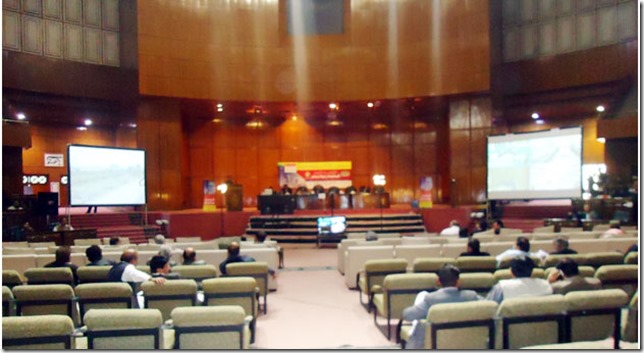 The auction was monitored and supervised by different Members of CDA who were part of the auction committee.

This was the first live auction for CDA where bidders participated not only from Islamabad but from other cities also. In Lahore, bidders were located at Lahore Chamber of Commerce & Industry (LCCI) and in Karachi, bidders were located at Federation of Pakistan Chambers of Commerce & Industry (FPCCI), while Convention Centre remained the hub for the bid in Islamabad.

The three auction sites were connected using high resolution video conferencing equipment and fiber and wireless connectivity at all sites. Primary link for each site was on fiber with backup on wireless.

Just to mention, the auction fetched Rs. 7.43 billion for CDA over three days, a lot more than what a single station could have generated.

In the closing ceremony, Chairman CDA, Mr. Nadeem Hassan Asif, called the CIS team on stage and appreciated their efforts for conducting a live auction for three successive days without downtime or any major issues.

Speaking on the occasion, Chief Executive Officer CIS, Mr. Asim Shahryar Husain, said that “CIS displayed its professionalism throughout the live auction for three days by testing connectivity between all three sites five days before the actual auction and monitoring power and connectivity throughout the live video conference for three days. Multi-point video conferencing is the future for meetings with remote sites to save on travel, time, and costs.” CDA plans on conducting more live auctions in 2014.