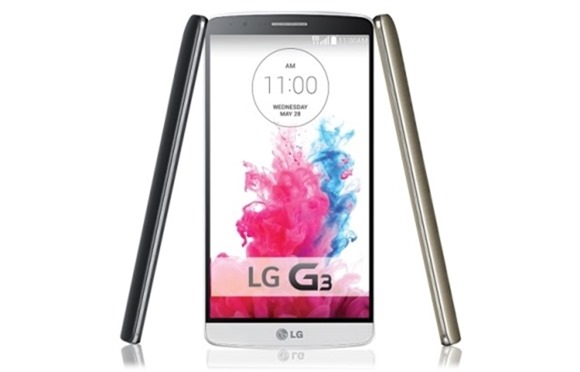 LG — over the past two years – has cemented its position as a major smartphone  maker. For sure it has been making Nexus phones for quite some time but its flagship Smartphones are always something people
look forward too.

Last year, it upped the game with its amazing G2, a phone which remains extraordinary even today (thanks to a reduced price tag) and now it is pushing the bar even further with the new LG G3, which is the first flagship smartphone by a major manufacturer to come with a QHD display.

LG G3 is made of plastic made to look like metal. It won’t feel as awesome as the One (M8) or Xperia Z2 though. The front has hardly got any bezels; almost 80% is covered by the mammoth 5.5″ display.

The back features the same trio of volume and power buttons, but they are now flushed more into the back. The dimensions are just about on par with the One and Xperia Z2, (being just 8.9mm thin) although the
display itself is larger. The design is also scratch-resistant but not self-healing like on the G Flex.

Of course, the highlight is the display. While Samsung, HTC and others have been known to test the True HD IPS display for long, LG is the first to actually use it in a phone.

For this kind of tech, you certainly need power and that is where the LG G3 shines too. It has a 2.5Ghz Qualcomm Snapdragon 801 processor with 4 Krait 400 CPUs and Adreno 330 GPU. Amount of RAM and storage can be chosen, with the 16 GB version coming with 2 GB of RAM, while the 32 GB variety packing 3 GB RAM instead. A microSD card slot will be onboard though.

The OS of the phone is enhanced too. Redesigning its Optimus UI, LG has added its own little touch to Google Now with the inclusion of Smart Notice. The service will remind you to call someone, check an appointment and more, while also providing automatic suggestions as taking an umbrella outside if it is raining.

And like the competitors, it is also flatter, lesser-skinned with updated icons and feel. Apart from Smart Notice, there are a few other nifty tricks too, such as the ability to turn on Wi-Fi as soon as you reach your home or office, the usual KnocOn & KnockCode, and a new health app which counts your daily steps and other info.

The back boasts a 13 megapixel camera with 4K video (at 30 fps), OIS and a new laser autofocus system which detects distances and contributes to faster snapping. The front 2 megapixel camera has been appropriately titled “Selfie” camera, that comes with a wider aperture and automatically takes a picture whenever you clench a fist in front of it.

A battery with 3,000 mAh capacity powers the phone up. Worth noting is the fact that while at the forefront when it comes to display tech, it hasn’t got a finger-print scanner or water-proofing. The speaker on the back can boost sound at up to 1.5W.

The phone will be available in five colours: Metallic Black, Silk White, Shine Gold, Moon Violet and Burgundy Red. Launching globally by the end of this month, the phone’s pricing is still under the covers.

With the G3, LG has launched the first properly desirable flagship of the year. It will be a shame if it fails to find enough traction when it hits the markets.