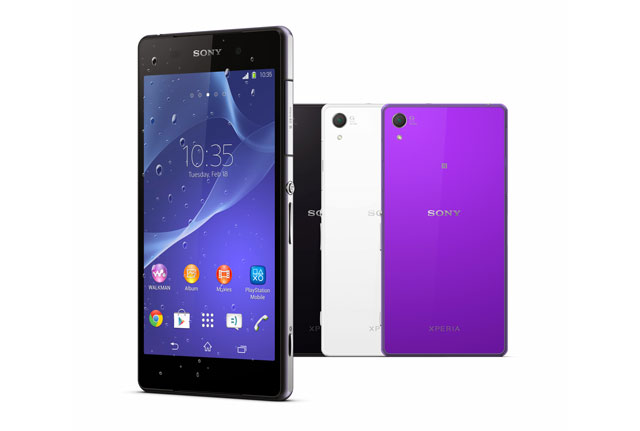 Sony seems to be Google’s most-active Android partner right now, churning out new flagships every few months. It seems not long ago that it announced its Xperia Z1 flagship and now here’s the Z2.

The upgrades made over that phone aren’t ground-breaking but welcome nonetheless. All the people who just brought a Z1, we sense, won’t be too happy right now. But with Sony, you never know.

The display here is a 5.2″ Full HD, slightly larger but with the same resolution. The real bump comes in the panel’s technology. Rather than using the same dull unit as the Xperia Z and Z1, Sony has instead chosen a new Triluminos IPS display which uses a technology called Live Color LEDs.

These displays also use Sony’s Bravia tech, made popular via its televisions.

Under the hood, you find a new quad-core Snapdragon 801 chipset, with four Krait 400 cores clocked at 2.3Ghz. That’s accompanied with 3 GB of RAM.

At the back is Sony’s famed 20.7 megapixel Exmor RS camera with f/2.0 aperture which now also shoots 4K videos at 30 frames per second. It also has a few clean tricks under its belt. Timeshift is a new feature which allows you to shoot and edit slow-motion videos. A dedicated mode for Vine videos and background defocusing is also home.

The front boasts a 2.2 megapixel Exmor R shooter. The Z2 is powered by a 3,200 mAh battery. The OS running on board is Android 4.4.2 KitKat, customized obviously by Sony.

Being a flagship phone, the phone is monumentally thin – just 8.2mm – and looking at its size, weighing a marvelous 158g. And as you’re already guessing, the phone is IP58-certified, meaning you can take it underwater with you without a worry in the world.

Here are the full specs of the Xperia Z2:

The new Xperia Z2 will be available for 600 Euros or around 86,000 PKR at its launch in March. Sony does sweeten the deal further by adding its own, MDR-NC31EM noise-isolating headphones in the package.

So if you already own the Z1, the Z2 may not be as tempting and we really don’t think that the device is worth upgrading to. If you don’t, then we propose waiting up a bit until Samsung and HTC have announced their competitors to the phone, which we think are probably coming in the next one or two months.