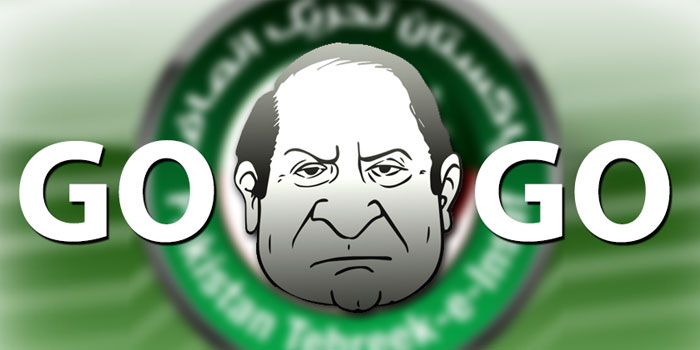 The chant ‘Go Nawaz Go!’ has been echoing across Pakistan for weeks and now, it has also made it to Wikipedia.

Under the title ‘Go Nawaz Go (slogan)’, a well structured and strictly as per Wikipedia guidelines, the page describes the infamous chant and its cultural influences.

The slogan has become a cult hit in Pakistan and the government has cracked down on its usage, making arrests and as per unconfirmed reports government went ahead to instruct the PTA to block any SMS messages which contain the ‘Go Nawaz Go’ characters. However, that has not stopped it from becoming one of the most popular social media hashtags of 2014.

Usually, pages like these are deleted citing reasons like ‘Vandalism’ and ‘Attack page or negative unsourced biography of living persons’ and that is what happened when some people tried to create it back in September and October. This time however, the slogan has been deemed popular enough to warrant its own page.

It’s officially part of Pakistan’s political terminology according to Wikipedia and considering that Wikipedia Pakistan’s twitter handle specifically tweeted about the page, we doubt that it is going to disappear from Wikipedia anytime soon.

NOW #GoNawazGo gets its own Wikipedia page. Created a few minutes ago. https://t.co/fBDfKIphV0 @PTIofficial pic.twitter.com/2aRGO8MGmQ

Reportedly, Wikipedia has received numerous complains over “Go Nawaz Go” page, asking the encyclopaedia to remove the content from its website.

However, Wikipedia has decided to not to remove the content due to such complaints as Wikipedia is not censored. According to Wikipedia, the “Go Nawaz Go” page is neither biased nor politically motivated and instead the page only represents a view published by reliable news sources.

Due to increased vandalism, Wikipedia administration has now locked down “Go Nawaz Go” page for few days so it is not openly edited by anyone.