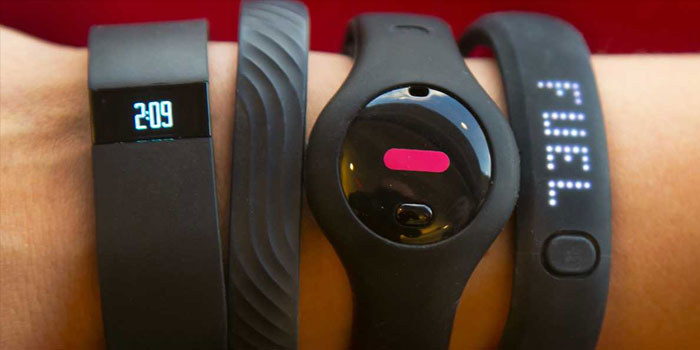 Fitness has always been tracked by the miles you can run or the number of reps you can put in at the gym. Stopwatches and pedometers have always been an essential part of an athlete or a fitness instructor’s armory. With the advent of the Smartphone and fitness tracking wristbands, it was only a matter of time before we could use our watches, wristbands and Smartphones for fitness monitoring and coaching.

In 2012, the market for fitness tracking and monitoring really took off. Some of the innovations that we see today are marvelous especially if you are a fitness enthusiast and would love to keep a record of your activity levels.

Nike has been a pioneer in the fitness tracking revolution

Nike has always been the trailblazer when it comes to fitness. They were one of the pioneers of integrating activity monitoring when they partnered with Apple, with the Nike+Ipod sensor, followed by the Nike FuelBand. Now discontinued, the Nike FuelBand (available in Pakistan) was all about motivation.

With Nike’s partnership with Apple going from strength to strength they have moved away from producing hardware to focus on improving user experience through better and smoother applications. Utilizing the greatly improved accelerometers and motion sensing capabilities of the new iPhone, Nike introduced its Nike+Running app, my current favorite. Nike+Running app has a great interface displaying your number of runs, distance and average pace accurately no matter whether you are running outdoors or on the treadmill.

There are many dedicated options for the fitness enthusiast like the Nike Fuelband, Jawbone Up, Fitbit and others

With Instagram, Facebook, Twitter and Pinterest integrated you get to share your workout with your friends and other running enthusiasts around the globe. It’s been a great motivator for me and I would suggest that if you are planning to adopt a healthy lifestyle definitely give this app a try. Nike+Running is available for free for both android and iOS.

Nike’s wearables have other competitors such as UP by jawbone (available in Pakistan). Jawbone Up not only keeps a track of all your activities but also your sleep, it provides you data which enables you to adopt a healthier daily routine. Jawbone works with a multitude of apps such as Runkeeper, Myfitnesspal and Strava amongst others. Though Jawbone has been a huge hit among the fitness enthusiasts, there has been criticism about its sleep tracking feature and battery life. If I have choice between UP Jawbone and Nike Fuelband, I would opt for the latter.

Major companies like Apple, Samsung and Microsoft are poised to invest significantly into the wearables industry in 2015

Writing about fitness wearable and smartphones, how can we leave out Samsung Gear which according to industry experts is currently the market leader when it comes to wearables, as it successfully blends the features of a smart watch and a fitness tracker.

Samsung is followed by Fitbit – with its clip-on One or the Charge Fitbit is the wearable of choice for many. Even if you don’t own a Fitbit device do try the Fitbit app (free with in-app purchases. Available for iOS and Android). The wearables market is going to heat-up with the Apple Watch rumored to be coming out in early spring 2015 coupled with Ihealth feature and Nike+Running on iPhone. The wearables market is estimated to generate revenue of over $53 billion by 2019.

While these and a lot more fitness apps are being produced, smartphones are still not the first choice when it comes to tracking and monitoring fitness. More and more people are turning towards wearables to enhance their workout experiences.

After smartphones and tablets, wearables could be the next tech frontier

We believe wearables are currently in the same phase as cellphones were right before the smartphone. Wearables will be taking a huge leap in the next couple of years, with a lot more imagination and innovation. The next generation of wearables have to utilize the real world and the user’s environment as its operating system, something that Google is also majorly investing in.