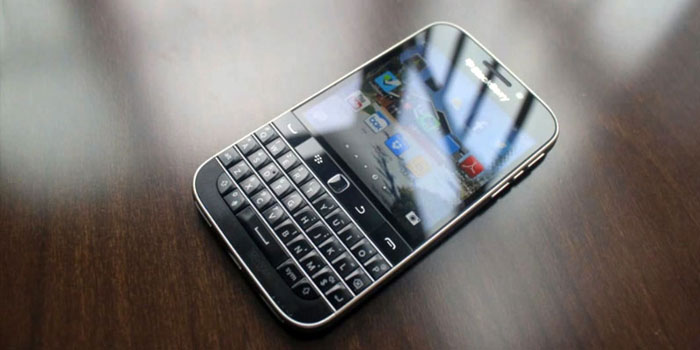 BlackBerry Smartphones with physical QWERTY keyboard used to be a standard in business. The release of the Blackberry Classic is a throwback to what made the company popular in the first place and is sure to please loyalists.

On first look, old BlackBerry users would immediately be able to tell that BlackBerry Classic closely resembles the BlackBerry Bold. The return of the physical QWERTY keyboard and square trackpad, surrounded by four navigation keys, would surely appeal to those fans and might as well attract new audience to the BlackBerry 10 OS.

As you’d expect from BlackBerry, the physical keyboard looks and feels brilliant. The keys lighting up in dark environments is a nice touch. The inroduction of new keyboard shortcuts is equally pleasing. The buttons protrude ever so slightly, allowing users to tell them apart while typing. However, unlike the curved keyboard with curved frets on the BlackBerry Bold 9900, this one accommodates slim and straight bars between every row.

Make no mistake, BlackBerry not only comes across as a sturdy device but is also a looker. Slightly raised brushed steel bezel on the smartphone gives the phone a nice, premium look and also tones down any damage from accidental drops.

It has a 3.5­inch LCD display (720p resolution at 290 ppi) with Corning Gorilla Glass 3. At 180 grams, BlackBerry Classic definitely feels a lot heavier than usual. It’s gotta be said, though, that even weight distribution thoughout the phone ensures that the Classic doesn’t feel too heavy on one end.

16GB of internal storage may leave more to be desired but BlackBerry has you covered with the option to expand memory up to 128GB. A couple of brushed steel slots on the side are homes to the micro SD card and a nano SIM card.

Blackberry Classic comes with a 3.5 inch display with 720p resolution, 16GB of memory, Blackberry 10 OS and 2GB of RAM

BlackBerry users would be aware that these could be found inside the battery doors on previous BlackBerry devices. However, unremovable battery on BlackBerry Classic leaves no room for that this time around. Speaking of battery, the 2,515mAh package truly impresses with nearly 22 hours of moderate use.

1.5GHz Dual­core processor coupled with 2GB of RAM help run the most demanding apps available on the BlackBerry 10 OS. The 8MP camera with LED flash along with 2MP front­-facing camera works significantly better in broad daylight than in darker environments. If you aren’t too crazy about taking high quality photos with a smartphone camera, this would be far from being a deal breaker.

It’s easy to infer that BlackBerry Classic is more or less a fan service. This is not even remotely an attempt to outdo the existing rivals in the smartphone industry. Instead, the idea is to retain loyal customers in the mix. Judging by how much it has to offer, BlackBerry Classic could very well deliver on that front. The smartphone is expected to retail for $449.