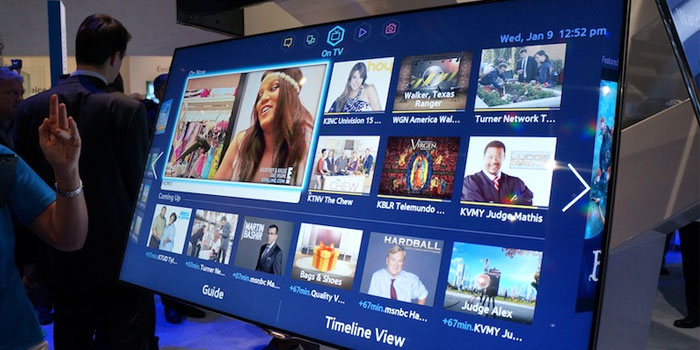 Tizen OS is the culmination of Samsung’s effort to develop its own operating system. It has not made its way to Smartphones or tablets just yet, but it will be featured on all Samsung Smart TVs in 2015.

Features will include automatic detection of Samsung devices for seamless content sharing among others. On their home networks, users will also be able to watch TV and live broadcasts on their smartphones and tablets without turning their TV on.

Ultimately, the vision for Tizen is be an OS that runs everywhere. However, that is easier said than done. It was announced 2 years ago to a lot of fanfare and was touted as an iOS and Android competitor. Delays, lack of consumer interest and failure to align properly with vendors and carriers has meant that the only things running Tizen are Samsung’s own smartwatches and some cameras.

In a statement, Samsung said:

“The way society consumes entertainment…has evolved and now includes multiple devices and endless content from a variety of sources. Recognizing this shift, Samsung’s new platform was designed to deliver an integrated entertainment experience that is at once streamlined and powerful.”

Recently, the company has switched the focus of Tizen OS to cheap smartphones, which are very popular in developing countries. With its inclusion in Smart TVs, it seems like the company is also going to make it an integral part of gadgets like smartwatches and everything that falls under the umbrella of Internet of Things.

Prototype of Smart TVs powered by Tizen OS are expected to be on display at CES 2015.