It is expected that introduction of next generation telecom services in the country will further boost the growth of telecom sector in Pakistan.

Based on stats made available by Pakistan Telecommunication Authority, below are various economic indicators for Pakistan’s telecom industry during the fiscal year 2014.

Considering the anticipated regulations for re-verification of cellular SIMs, teledensity for cellular industry may decrease during 2015. 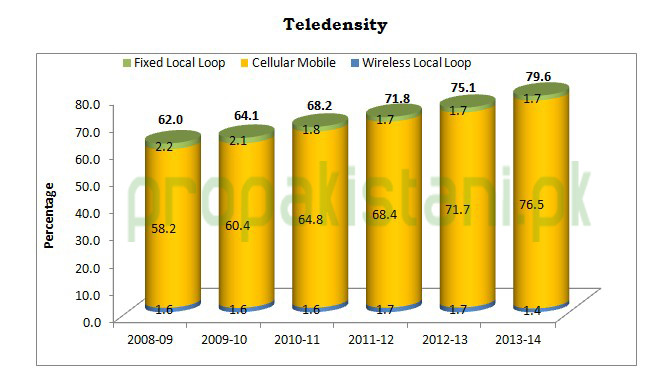 Annual revenues from telecom sector reached to an estimated Rs. 465 billion during FY2014, up from Rs. 440 billion last year, and registering an annual growth of 5.6%.

This annual revenue growth of 5.6% during FY2014 is slower than the growth of 7.4% in FY2013. This hints that telcos are struggling for revenues amid strong competition and due to abundance of on-net voice bundles. 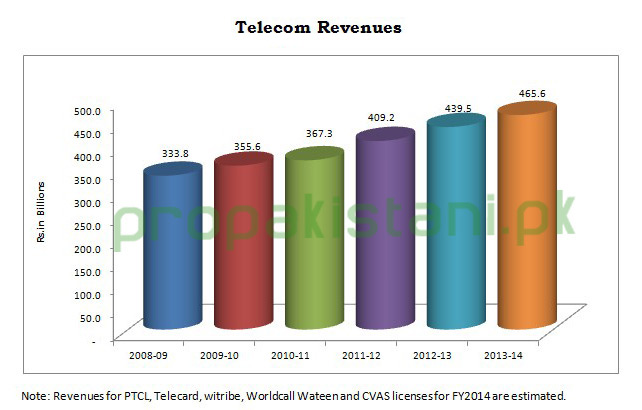 Over the years, cellular mobile’s share in total revenues has increased from 63.6% in FY2009 to the current level of 69.7%; comparatively, LDI segment’s share has declined to 8.7% from 14.4% in FY2009 due to low international traffic.

Telecom operators are continuously striving for new avenues of revenue growth by introducing innovative packages and value added services according to consumer demands, market trends and advancement in technology/solutions.

Therefore, despite slow economic growth and low purchasing power of vast majority of population, revenues of telecom sector are registering positive growth, albeit high revenue growth has not been witnessed over the last few years.

Telecom sector is a significant source of revenue generation for the national exchequer.

During the last three years, telecom sector was contributing an average of Rs. 124.8 billion annually to the national exchequer in terms of taxes, regulatory fees, initial and annual license fees, activation tax, and other charges.

During FY2014, telecom sector has contributed an all time high Rs. 243.8 billion, registering a growth of 95.8% over the last year. This jump in contribution is due to auction of 3G and 4G cellular mobile licenses in April 2014. 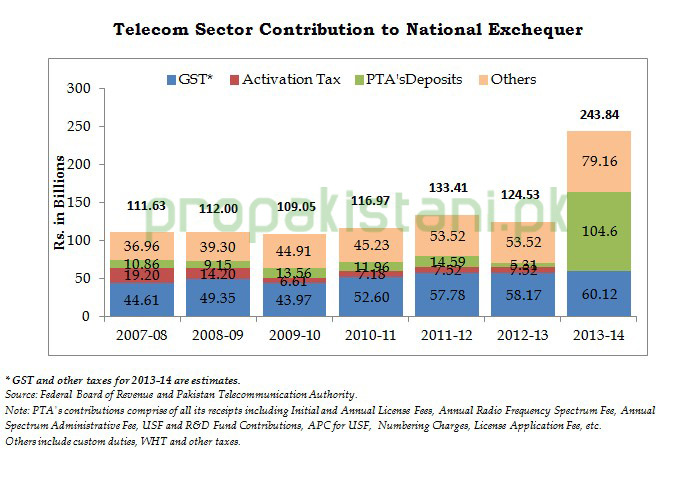 PTA has deposited to the Government Rs. 96.5 billion out of the total value of US$ 1.11 billion of the NGMS spectrum auction and the remaining amount of US$ 147.5 million along with markup @ LIBOR+3% per annum will be paid by the operators in equal annual instalments in the next five years.

Need for Rationalization in Taxes

Effective from 1st July, 2014, Federal Government has reduced GST/FED on telecom services from 19.5% to 18.5% and Withholding Tax (WHT) from 15% to 14%. This tax reduction is applicable to Islamabad, Balochistan, FATA, AJK and Gilgit Baltistan regions. The provincial tax departments of Punjab, Sindh and Khyber Pakhtunkhwa did not reduce taxes.

Telecom sector is subject to higher GST and WHT rates compared to average GST of about 16% and 10% WHT in other sectors. Telecom sector of Pakistan is considered amongst the highly taxed sectors in comparable countries. Rationalization of taxes on telecom services can positively contribute to the telecom sector growth and contribution in the economy.

During FY2014, cellular mobile operators have invested US$ 1,789.7 million on account of acquiring 3G and 4G spectrum and deployment of advanced telecommunication networks.

The overall telecom investment reached US$1,815 million in FY2014; an almost three times increase from the level of US$600 million last year.

Almost half of telecom investment was in the form of FDI i.e. telecom sector attracted over US$903 million of FDI in FY2014, 34.2% of the total FDI received by Pakistan in that period.

PTA auctioned spectrum in April 2014 for 3G and 4G cellular mobile services from which significant further FDI was received. The auction concluded with a total value of US$ 1.11 billion.

By the end of FY2014, US$ 965 million of the auction proceeds have been paid by the operators with the balance of US $147.5 million plus markup @LIBOR+3% per annum receivable in five equal annual installments in the next five years.

During FY2014, both operators as well as cellular mobile customers prepared themselves for 3G and 4G services in the country. Operators upgraded their telecom networks and systems, and subscribers opted to shift to smart phones to enjoy 3G/4G services.

If you just look at Mobile Phone import bill, that has touched USD 544 million or Rs. 55 billion, there is a dire need for deployment of local manufacturing plant.

Not to mention, majority (more than 70%) of this mobile-phone import consist of low-end handsets, hinting that an entry level phone manufacturing plant — with relatively small investment — can make a huge difference.

With an increasing annual trade deficit amounting to US$ 16 billion and a pressure on foreign exchange reserves, it is now vital for Pakistan to develop local industry for telecom equipments and handsets with the cooperation of regional partners engaged in telecom manufacturing.

We have been pushing for this for a long now, but apparently all such proposals are put on deaf years to finally witness an increase in import stats.