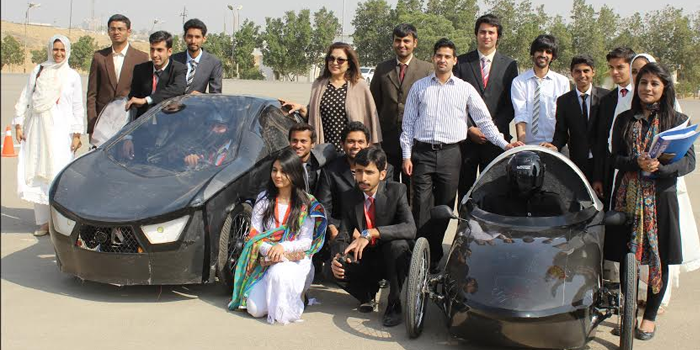 In a persistently dynamic world economy, efficiency and innovation are the foremost requirements in modern technology. Shell places its trust in youth to overcome such challenges that the modern day technology presents. The Shell Eco-Marathon (SEM) is dedicated to offer students from all over the world a chance to make this possible.

As the annual event approaches its 30th anniversary, this would be the second time Manila, Philippines becomes hosts SEM Asia. The focus this time is on reducing the harmful greenhouse gas emissions caused by transportation. As a result, students strive to maximize fuel efficiency in automobiles that account for 13% of these emissions. The SEM Asia is set to commence on February 26 and will last till March 1, 2015.

Pakistan has had the privilege of being the first South Asian country to partake in the global event back in 2009 at Berlin. Out of 158 student teams from all across Asia and Middle East, 14 from different universities in Pakistan will have the opportunity to showcase their skills at Luneta Park in Manila, Philippines this year.

Both teams from PNEC-NUST have built gasoline-based vehicles that sport modified 70cc engines. Each of these concepts bears a carbon fiber chassis. Moreover, both vehicles offer the same features such as Safety Sensors, Proximity Sensors and an Interactive Interface to communicate with the driver. They have already received a go-aheadl from industry experts in Pakistan.

Survival of the Fittest

Given that the tight bends of the circuit tracks in Manila require immense agility and precision, it will surely be a tight contest. Each team will be judged based on various categories including: Building around Health, Safety, Security & Environment (HSSE), Reducing Ecological Footprint, Out-of-the-Box Design, Bringing Innovation to Life and Future of Energy.

Awards to be won

There are rewards for those whose skills surpass all others’, ofcourse. The winner of the event will be awarded $20,000 whereas the Runners Up will take away $10,000. In addition, there will be six Off-Track awards up for grabs. The categories for these include: Communications, Vehicle Design, Technical Innovation, Safety, Perseverance and Spirit of the Event and Shell Helix Tribology Award.

Shell Pakistan is determined to promote the success of Pakistani students. For this purpose, it planned a road-show to help assess the fuel efficiency of each vehicle designed by the students. This does not only test the quality of the vehicles but also assists in overcoming any existing shortcomings for students to work on. Eventually, this will allow for a proper show when it matters most on the big stage that awaits in Manila. Here’s wishing our budding stars the best of luck as they embark on their journey to Manila.