Thanks to mighty share from International traffic and financial services, Telenor Pakistan posted record revenues of Rs. 27.84 billion during fourth quarter of 2014, up from Rs. 23.14 billion it posted last year for same duration, said a financial report released by Telenor Group.

Increase in revenues is mainly attributed to increased share from Easypaisa and international traffic that amounted to Rs. 6.33 billion during the reported quarter.

Easypaisa, which constituted 9% of Telenor Pakistan’s total revenues during the quarter, effectuated 113 million money transfers with a total transfer value of Rs. 300 billion, showing a growth of 42% from 2013.

At the end of 2014, Easypaisa had close to 13 million customers.

Capital expenditure increased from further expansion of 3G network. 1,700 sites were added to the 3G network during the quarter, increasing the 3G coverage to 66 cities by year end. Telenor said that its 25% of the subscribers are now active data users.

During the quarter, the number of subscriptions increased by 126,000 to 36.5 million. The subscriber base was 9 percent higher than the same quarter last year.

ARPU in local currency decreased by 8% to Rs. 180, down from Rs. 193 during last year, primarily due to the continued on-net competition. This was partly offset by revenues from data and voice bundles and growth in recharges and emergency loans. 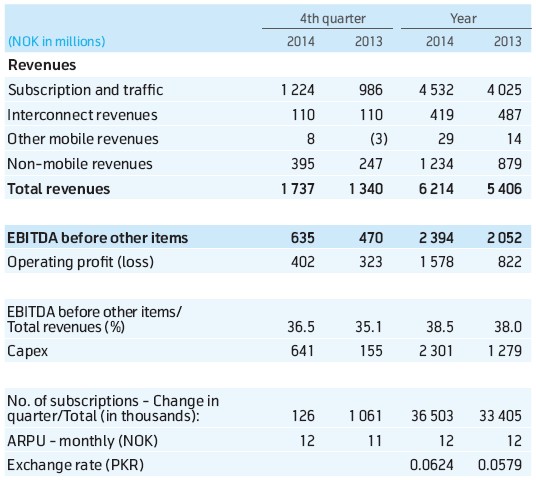