Telenor Pakistan posted its total revenues of Rs. 23.14 billion (or NOK 1340 million) for fourth quarter of 2013, down from NOK 1,421 million during the same duration last year.

Total revenues in local currency declined by 1%, mainly due to price erosion from low priced on-net offers and negative contribution from ICH of 3 percentage points.

Telenor Pakistan’s revenues from subscriptions and traffic stood at Rs. 17.02 billion during the quarter ended December 31st, 2014, while non-mobile revenues during the report period were recorded at Rs. 4.27 billion.

The EBITDA margin decreased by 8 percentage points primarily coming from increased commissions as last year was affected by the government directed SIM sale restrictions and increased push on Easypaisa services this quarter.

Capital expenditure decreased after the successful completion of network modernisation and was focused towards network optimisation and swapping of billing platform.

ARPU in local currency decreased by 8% and reached Rs. 189, down from Rs. 208 during same period last year, mainly due to increased focus on on-net offers accompanied by the decrease in interconnect ARPU due to shifting of revenues from incoming international traffic through International Clearing House (ICH) to non-mobile revenues and declining levels of domestic interconnect traffic. 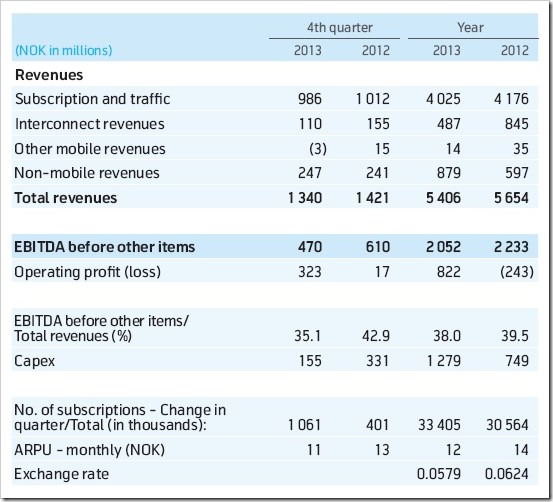