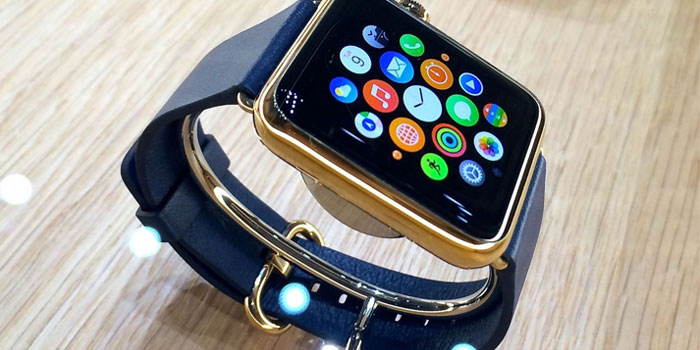 And with those words, Tim Cook started the Apple Watch unveil, a product that people wanted to see since it was announced half a year ago. Here are some of the most important things that Apple’s answer to the smartwatch is being billed as:

Your Fitness and Smart Health Companion

“When I’m at work, I tend to sit a lot, and sometimes I forget to stand up.”

The Apple Watch has got a ton of sensors which can track your physical activity throughout the day. And the software on the Apple smartwatch is intelligently designed so it motivates you to sit less and get some exercise.

This can prove to be a good thing for the couch potatoes amongst us since the Watch will give weekly reports as well. And in case professional fitness folks were worried, Apple has also bundled a Workout app for cardio sessions.

And there’s an intelligent stopwatch that tracks stuff like outdoor runs and time elapsed. The watch suggests fitness goals for you daily, based on your physical activities and attributes.

The Apple watch lets you receive and answer calls from your iPhone! Messages too while you’re at it. Its  great if you don’t want to fiddle around for the iPhone from your pockets.

The Glances feature will be used a lot, in order to check up quick info like heartbeat amongst many other things. It’s the iPhone’s notification center, except on your Apple Watch. Siri voice support is there as well. Some apps like Twitter, Instagram and the rest also work in Apple’s not-so-quaint little timepiece.

Draw something on your watch face with your finger and… your friend’s Apple Watch can also display the same drawing? A pretty cool and nifty way to communicate. This feature is being called Digital Touch.

“You can use Apple Watch to pay for things.”

Thanks to Apple Pay (which, sadly is limited when it comes to its utility in Pakistan), the Apple Watch will let you make payments with just a double tap of the side button at supported retailers.

Believe it or not, the Apple Watch can let you open your hotel door, or garage doors, or home doors for that matter. It also comes with the Passbook app that can be used for boarding passes when it comes to air travel.

Start your updates people, because iOS 8.2 drops today with the Apple Watch app. Downloading and installing apps on your Apple smart watch is done via this app.

The Apple Watch comes with an 18 hour running time on a typical day according to Apple.

Want to know the prices for the Apple Watch? Check out this article with all the relevant information!