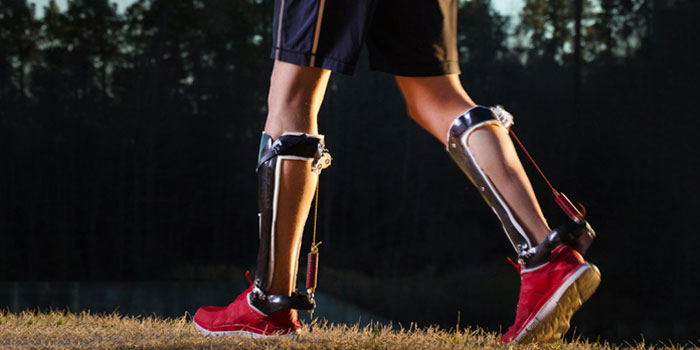 Scientists have come up with the first fully mechanical exoskeleton device that reduces the energy needed to walk, and it does so without the need for electric motors or batteries.

Tests have determined that the ankle exoskeleton brace worn on the lower half of the leg decreases the energy a person uses up when walking by 7 percent. It may appear to be a trivial saving, but as per the researchers, the 7 percent reduction in expended energy is the equivalent of taking off a 4kg backpack from one’s shoulders.

How does the mechanism work?

According to its makers, the exoskeleton brace enhances the performance of your calf muscles and Achilles tendon by absorbing small amounts of energy while you walk. When your foot touches the ground, the Achilles’ tendon in your heel helps your ankle bounce in an out of position with minimal energy expended. The brace is worn over the lower leg and foot, and pivoted at the ankle.

A clutch and spring work alongside your calf muscles and Achilles tendon. Instead of being powered by electronics, the clutch employs a ratchet and pawl mechanism that engages the spring in every instance that your foot touches the ground. This results in energy being stored in the spring, which is then used to lift the foot back up in the air upon the spring’s release.

A breakdown of the mechanism is as follows:

What are its potential benefits?

The lightweight exoskeleton brace would mainly be beneficial to people who find it difficult to walk due to some chronic injury or old age. It would also be of great use to those who can’t walk for extended periods due to gait and balance disorders.

What will it cost?

There’s no set price determined by the makers as yet. Although, instead of costing thousands of dollars, the consumer version of the exoskeleton brace is expected to cost a few hundred dollars, thanks to its mechanical design that doesn’t require any electronic input.