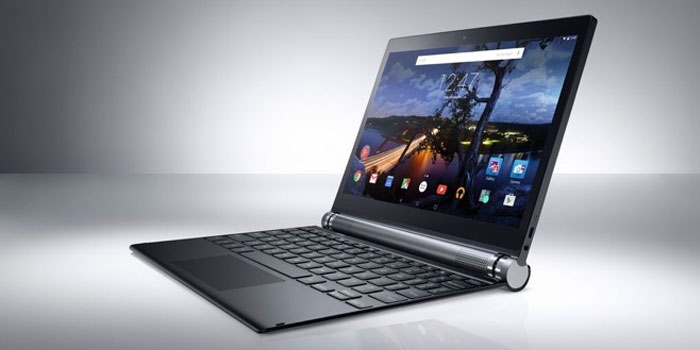 Dell has announced a new 10.5″ tablet targeting business users, after its acclaimed Venue 8 7000, the Venue 10 7000. It takes an inspiration from the Lenovo’s Yoga tablets and round cells, which are found at the bottom. The location also packs a couple of speakers and can also host a keyboard dock.

The display of the tablet comes with a 10.5″ OLED display with an impressive 2,560 x 1600 resolution. The design, as we’ve said is again a talking feature as it is on the smaller model. The tablet is just 6.2mm thick.

On the internal side, you get an Intel Atom Z3580 processor with 2 GB worth RAM and 32 GB worth storage, which is expandable by up to 512 GB. On the back side, you get the same 3 Intel RealSense 3D cameras, and 8 megapixel resolution. The metal cylinder at the bottom houses a 7,000 mAh battery.

Connectivity options include microUSB, headphone jack and microSD. The tablet runs on a slightly customized version of Android 5.0 Lollipop.

The Venue 10 7000 won’t come cheap. It will cost $499, which is the same as the Surface 3 and iPad which are arguably the authority on tablets catered towards power users. The separate keyboard dock accessory will cost $130.