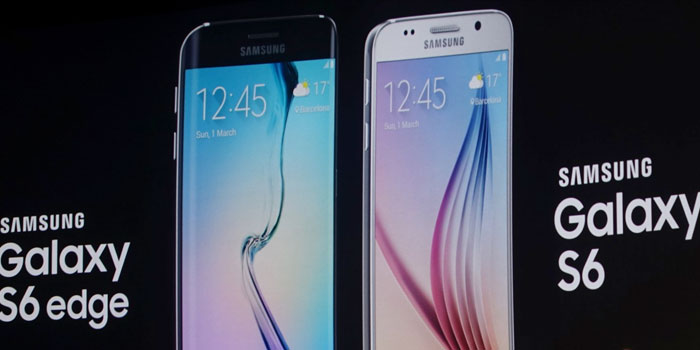 Samsung went about looking for inspiration after the S5 was made fun off in reviews across various mediums for being “plastic”. Samsung realized that while loading a phone with specs was great, it was just as important to have those features encased in an aesthetically designed solid looking body.

So the new iPhone might have been a probable inspiration. While scouring the internet, quite a few reviews tend to agree with us especially when they say:

So when it comes to design both Engadget and Verge tend to agree that Samsung has outdone itself with design on their new flagship phone. The glass front and back seamlessly gel in with the metal rim. While the phone’s face is similar to the S5, a 36 degree view of the phone and one would see the similarities between the iPhone and S6; Verge explains this perfectly when they write:

….take a look at the bottom of each phone: You’ll find the same perfectly machined holes and ports in basically identical spots. Samsung also dropped the removable battery, the microSD storage expansion, and even the waterproofing, all in the name of design.

The inspiration just doesn’t stop there; the fingerprint sensor is pretty similar to the one on iPhone in terms of how it works, though not as fast. Then that’s pretty much about it, as the specs and all are typical Samsung.

The 16-megapixel optically stabilized camera has won rave reviews from all quarters and the gurus at Engadget term the experience as impeccable. The best thing about this phone is that you do not have to tinker with the camera settings and it’s simply point and shoot to get great photos. Forbes even went as far as to say the camera was better than anything the iPhone lineup has to offer.

The camera on the Galaxy S6 (and the similarly equipped Galaxy S6 Edge) is not just a match for Apple’s iPhone shooter, but in almost every situation performs better. –

On the front is a 5 MP camera and along side the back camera resides the heart rate sensor. According to Engadget, this tiny sensor “makes taking heart rate and blood oxygen readings in S Health quite a bit easier” when compared to the S5.

On the processor side the S6 is a power packed machine with 64-bit Octa-core processor and 3GB of RAM. Samsung has taken care of any Android based hiccups by simply making the processor as fast as they could. The battery life though could have been better, especially with a 5.1-inch Super AMOLED display with a 2560 x 1440 resolution.

And now that we are writing about the screen, it would be appropriate to mention that for all practical purposes the S6 Edge is the same as the S6. The difference is the screen which curves to two sides and some software related tricks that make use of it. These include rows of colored, favorite contacts that you can swipe to see, a night clock and a “Information stream” which gives you time, notifications and weather etc.

The information stream is super slow and buggy – Verge

The curved screen doesn’t do much – Engadget

When it comes to sound, both S6 and S6 Edge have a single speaker placed at the bottom-right corner of the frame. The speakers are pretty good and loud but fall a tad bit behind if you compare them to the Boomsound speakers on the HTC M9.

Both Engadget and Verge agree that the version of Samsung’s Touchwhiz on S6 and S6 Edge is ‘finally worth using’ as they have sharpened the knife on extraneous features while consolidating the much loved features. The S Health app has also been improved on. And with all the power hungry features, Samsung has tried somewhat to counter the low battery life issue by providing rapid USB charging and supporting both major wireless charging standards.

Improving vastly on the design aesthetics, Samsung has given up on options such as removable battery, water proofing and extendable memory

Improving vastly on the design aesthetics Samsung has given up on options such as removable battery, water proofing and extendable memory, but that should not be a major concern especially since the phone will be coming in 32GB, 64GB and 128GB models.

All in all S6 is probably a flagship phone that was well overdue from Samsung. It feels complete when it comes to aesthetics and functionality and most of all, might give iPhone aficionados pause. For the S6 Edge, the verdict is that it’s just a vanilla S6 with a curved screen whose utility is debatable when compared with the extra cost.